Case Study: How Has Surface Temperature Changed in the Recent Past?

Temperature Change as an Indicator of Global Climate Change

Changes in average surface temperature recorded at locations around the world are key indicators of global climate change. Scientists investigating climate change gather data from historical records and from an array of approximately 12,000 land-based and ocean-based weather stations scattered over Earth's surface.

Predicted consequences of long-term changes in Earth's climate include decreased polar ice, prolonged droughts, increased frequency of severe weather, and changes in precipitation patterns. Precipitation changes include both decreases in some regions and increases in others.

Scientists are concerned that as polar ice melts, the ocean will become less salty, affecting fish and other marine organisms. There is also concern of global sea level rise. A study conducted by the United States Geological Survey estimates that a global sea level rise of 5 meters would affect about 670 million people and submerge some 5.4 million square kilometers of land.

The Intergovernmental Panel on Climate Change (IPCC), an international group of scientists, has been studying climate change research since 1988. Their analysis of current research concludes that Earth's average surface temperature has increased about 1 degree Fahrenheit (0.6 degree Celsius) in the last century.

In the United States, the National Climate Data Center (NCDC)—a division of the National Oceanic and Atmospheric Administration (NOAA)—gathers, stores, and analyzes weather data and reports its findings back to government officials and the general population. The NCDC analysis below compares the average global surface temperature (in degrees Celsius) to the 100-year average temperature for 1901–2000. It shows a fast-growing warming trend since the late 1970s. For updated information visit the EPA climate change indicators site. 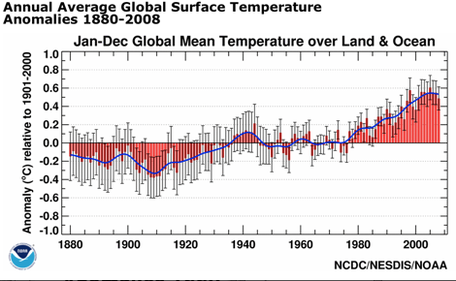 ×
This is a bar graph with variations from teh average of the last 128 years of global Temp.

Provenance: Rita Freuder, University of New Hampshire-Main Campus
Reuse: This item is offered under a Creative Commons Attribution-NonCommercial-ShareAlike license http://creativecommons.org/licenses/by-nc-sa/3.0/ You may reuse this item for non-commercial purposes as long as you provide attribution and offer any derivative works under a similar license.

In most parts of the U.S., the average surface temperature has increased in recent years. In this chapter, you will compare data from a weather station in Barrow, Alaska to data from a station in Key West, Florida.

As you investigate changes in surface temperature over time, consider these questions: