Case Study: What Do Forests Have To Do With Global Warming? 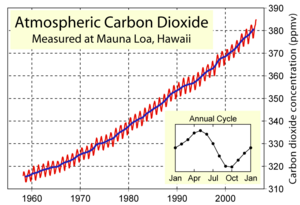 The red curve shows average monthly concentrations since March of 1958, and the blue curve shows the 12-month average. Click the graph for a larger view.


Earth's atmosphere is changing. Since measurements began in the late 1950s, the average concentration of carbon dioxide (CO2) in the atmosphere has climbed steadily. The increase in CO2 is attributed to the human activities of burning coal, oil, and wood.

Increased concentrations of CO2 mean that the atmosphere now traps more heat from the sun's energy than it did at lower concentrations. The connection between increased levels of carbon dioxide and global warming has politicians, scientists, students, and households wondering what they can do to reduce the amount of carbon dioxide in the air.

Show me more about this graph

Hide
The graph is known as the Keeling curve, named after Charles David Keeling, the scientist who supervised the long-term effort to collect the data. The regular changes in the red line are caused by seasonal variations. Averaging the monthly data with the six months before and the six months after it produces the blue curve. The curve indicates that CO2 levels have risen substantially over the past 50 years.
The figure was produced by Robert Rohde; it is a part of the Global Warming Art collection. 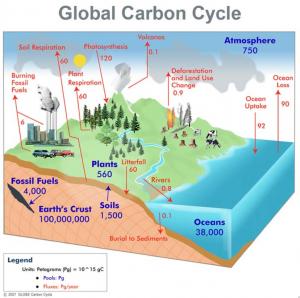 Click the image for a larger view. Diagram courtesy of GLOBE Carbon Cycle.

The Carbon Cycle is similar to the concept of the Water Cycle. Carbon exists in different forms in different places, and natural processes move it from one place to another.

A number of questions need to be answered in order to consider this solution. For instance:

Answering these questions by carrying out full-scale experiments in actual forests, while effective, takes a lot of resources including money, people, and tools, especially when you consider the amount of forest area that would need to be measured. Field data collection and experiments are also often limited by the long amount of time it takes to get meaningful results. As a supplement or sometimes an alternative, scientists have created models to help them better understand forest ecosystems. Models can vary widely in their intention, limitations, and implementation, and are typically designed with specific goals in mind.

In this chapter you will use one type of model that shows how biomass and carbon storage accumulates in a forest ecosystem over time. As an example, you'll use the model to explore the carbon storage by forests in New Hampshire; then, you'll use data from the U.S. Forest Service to explore the forests of your own state. Setting different conditions in the model, examining the outputs, and answering follow-up questions will help you understand the role that your own state's forests play in the uptake of carbon dioxide from Earth's atmosphere and storage of carbon in the biosphere.