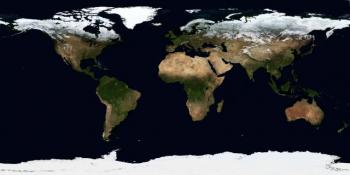 The Next Generation Blue Marble True Color image of Earth courtesy of NASA.

Satellite images allow us to monitor our home planet from the vantage point of space. The view from above provides new and powerful insights into many of the physical and biological phenomena that shape conditions for life on Earth. Satellite images show natural surface features such as deserts, forests, and grasslands. They also show human-created or anthropogenic features including urban areas, reservoirs, and agricultural regions. Some satellite images reveal properties that are invisible to the human eye; these include measurements of land and sea surface temperatures or chlorophyll concentration in the oceans. Additionally, meteorological phenomena such as hurricanes, frontal systems, and dust storms can be monitored by satellites. Some satellite sensors have been designed to image specific components of the atmosphere such as water vapor, aerosol particles, and the concentration of various gases.

In this chapter, you will select, explore, and analyze satellite imagery. You will investigate the relationship between atmospheric carbon monoxide, a harmful gaseous pollutant, and aerosols, tiny solid airborne particles such as smoke from forest fires and dust from desert wind storms. You will use ImageJ to animate a year of monthly images of aerosol data and then compare the animation to one created for monthly images of carbon monoxide data. Using NASA's Earth Observatory Image Composite Editor (ICE), you will display, graph, analyze, and evaluate variation and covariation in carbon monoxide and aerosols in Earth's atmosphere.