Lab 7: Future of the Cryosphere

The lab activity described here was developed by Erin Bardar of TERC for the EarthLabs project. 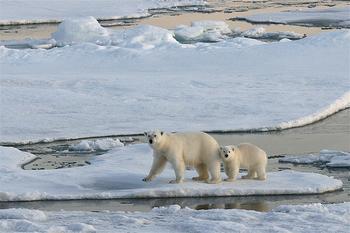 Warming temperatures are responsible for significant declines in sea ice thickness and extent in recent years. The loss of sea ice habitat due to melting ice is the primary threat to Polar bears. What will the future hold for the cryosphere and for the polar bears? Photo taken by Martha de Jong-Lantink. Image Source: Flickr.

In this culminating activity, students contemplate what the future might hold for climate and the cryosphere. In the first part of the lab, students consider potential changes in sea level that might be brought about by climate change and melting ice. In Part B, students use the online interactive "Earth Swings" to explore different aspects of sea change that emphasize the idea that Earth's surface is not static, but in fact has always been changing and will continue to change.

For more information about the topic, read the section titled Background Information under Additional Resources below.

In Part A: Students predict how massive melting of sea ice and land ice will each contribute to global sea level rise. They then design and construct a model to demonstrate both processes. Provide each small group of students with the following materials:

Watch this video to see a simulation of how the melting of ice shelves and ice sheets affects sea level.


After completing their models, students interpret sea level rise data and use the online interactive Mountain of Ice: If the Ice Melts and a world map showing areas at or near sea level to see where sea level rise due to melting ice poses the largest threats.

In Part B: Students use the online interactive "Earth Swings" to explore different aspects of sea change that emphasize the idea that Earth's surface is not static, but in fact has always been changing and will continue to change. Concepts such as the coming and going of ice sheets, the motion of tectonic plates, the deformation of the Earth's crust due to glacier weight and ocean circulation and pH are presented as examples of changes to Earth's surface.

This visualization is still being developed. When it is is completed, students will be able to compare the rate of change of historical climate changes with the rate of change of anthropogenic changes, and read word analogies and see visuals to help them grasp the difference between slow natural changes and rapid, human induced changes. This rate of change comparison is presented through both a word analogy, and a visual timeline, to accommodate different learning styles. Two types of historical change will be featured: slow Earth swings (such as the last glacial maximum) and abrupt swings (such as the 8.2 Event and the Younger Dryas). The rate of change of these events can then be compared with each other, and with future projections.

In Part A: To be determined through testing.

In Part B: To be determined through testing.

ADDITIONAL ASSESSMENTS TO BE DEVELOPED FOR THE PILOT VERSION

Cryosphere lab activities are aligned to standards in this document:

Developer will correlate activity to standards listed at this site: