But so Much is Going on at the Same Time

Students come to us from other science classes with experience in thinking about one thing at a time. In fact, one of the hallmarks of the scientific method, they have often been taught, is to isolate out and control one parameter at a time, to set up experiments in which there is one manipulated variable or perhaps two.

Then they show up in Earth Science class, and we want them to think about interactions among many processes and phenomena, all varying over time and space. To get your mind around the water cycle, for example, requires understanding a dozen or so different kinds of reservoirs, and the fluxes among them, and the processes that speed up or slow down each flux. And all of those things are going on at the same time.

In general, humans find it difficult to consider many different processes or phenomena at the same time. We do, however, have one sensory modality that is exceptionally good at processing multiple simultaneous signals. That would be hearing. We can pick out individual instruments in an orchestra, or follow the intertwining voices of four-part harmony. We can distinguish one voice from the rest in the babble of a crowded party. In a work setting, like a factory or a research vessel, the experienced ear can monitor many separate processes simultaneously if they each have an audible signature. 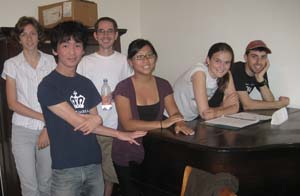 Lamont 2007 summer intern a cappella group
Two summers ago, the undergraduates in Lamont's Research Experience for Undergraduates program recorded a collection of audible Earth System models, aka songs. In the example below, each student sings one component of the water cycle, and their lovely young voices sing at the same time. And yet, our auditory system can sort them all out and make sense of what we are hearing. Click here to listen: Water Cycle Song (MP3 Audio 2.9MB Nov23 09)

"Embodiment" or "embodied cognition" is the idea that aspects of cognition are shaped by aspects of the body, including how the perceptual system works and how the body interacts with its environment. These singer-students are sharing an embodied experience of the components of the water cycle interacting and intertwining. I think that this learning will stick with them for a lifetime.

Intern Morgan Hardy was the organizer of the a cappella group and the producer for the recording, which is called "Water Cycle!!!!" A version of the lyrics are here. A professionally recorded version is available on Tom Chapin's Mother Earth album, free preview available here.

But so Much is Going on at the Same Time --Discussion

Hi Kim, interesting insights into resolution of multiple inputs of information--but is this really limited to auditory input? I think that there are good examples of processing multiple inputs from the visual world as well. For example, when I am refereeing a soccer game, I must simultaneously have a focus on the immediate, dynamic play in front of me (positioning myself not too close, not too far, at an appropriate angle to see the positions of players for a possible foul), and at the same time, using my peripheral vision to be aware of actions on the entire field: play off the ball (again, potential for fouls and misconduct) and to be able to see information conveyed by my Assitant Referees (flag signals to indicate ball in and out of play, offside, fouls assessed in their "quadrant"). As an Assistant Referee, one of my primary responsibilities is the offside call. This requires simultaneously: knowing the positions of all players at the time of the kick, seeing the actual kick (hearing is not sufficient--timing is everything and the sound of the kick will be late with respect to dynamic play particularly at the upper divisions), and a decision has to be made whether or not a player in an offside position is actually involved in the play (did the player interfere with a defender, make a move to play the ball)? All these visual inputs have to be processed and the call (or no-call) has to be made in a split second to fairly officiate the game (there is nothing worse than calling back a goal after a late offside call has been made). When I go hunting, I am simultaneously processing visual clues on many scales: surveying the landscape for likely habitat, looking for anomalies in patterns in the landscape that reveal hidden game (a white rump patch of a whitetail deer just barely seen in a thicket of willows, analyzing a track in the snow to determine direction and time when game passed through. While driving the same skills are employed to process multiple inputs (perhaps automatically or unconsciously in many cases): traffic signs, road conditions, actions of pedestrians or cyclists...It's all happening in real-time in real-life. So, I think we may be able to capitalize on these types of innate abilities to process multiple inputs to better help students discern complex interactions in the Earth system. Like a sporting event, it's probably important to help students practice early, practice often.

Hi Dave, Your examples are really good of how people can gather and quickly process multiple strands of information simultaneously through many sensory pathways, not only auditory. I notice, though, that all of your examples (refereeing, hunting, driving) are from outside of formal classroom education. That's true of my example also: even though the summer interns were gathered into one place for a science research experience, and even though the topic of their songs was the earth system, the a cappella group was something they did of their own accord with no adult supervision squeezed in between time spent in their respective labs. Your examples confirm that people are clearly capable of coping with many things going on at the same time, under certain circumstances and faced with certain kinds of challenges. But I don't think we are doing very a good job of taping into that ability in science education. Instead, I think we tend to push students in the opposite direction, to focus intently on one thing at a time. Both skills are necessary. How can we get them both?