Seismologists Gather for "Discourse Over Materials"

<image info>
Every Friday afternoon, for as long as anyone can remember, the seismologists at Lamont-Doherty Earth Observatory have gathered for a lively session of discourse over materials.

"Discourse over materials" is a phrase coined by scholars who use ethnographic techniques to study the behavior of scientists and science students as though they (we) were a recently-contacted tribe with mysterious customs and folkways. "Discourse," in this context, lies somewhere in the triangle bounded by "conversation," "discussion," and "argument." "Over materials" refers to the situation where a knot of people gathers around some physical object or representation, which serves as focal point, statement of the problem, source of evidence, and visual aid in the discussion. This form of discourse includes lots of gestures and pointing, and some bouts of "muddle talk." Meaning-making emerges in some complicated way through the interplay among the materials, the spoken words, and gestures (Roth & Welzel, 2001; Ochs et al, 1996.)

The seismologists don't call what they are doing "discourse over materials"; they call it "record reading." In the early days, they would look at the record of wiggles on the Lamont seismograph produced by whatever earthquakes had occured that week. Seismograms are a classic example of what scholars of science studies call "inscriptions" (Latour, 1987), i.e. representations that capture an aspect of the world in a form that can be preserved, transported, and manipulated. I attended record reading the week of the January 12 Haiti earthquake, and found that interpretation of seismograms is still a central aspect of the exercise. In the photo below, senior seismologist Bill Menke is sketching his interpretation of the data record, but rather than just the wiggles recorded locally at Palisades NY, he is interpreting an inscription that aggregates the signal from an array of instruments deployed across the U.S. Other seismograms are strewn across the table, and students and colleagues gather round. 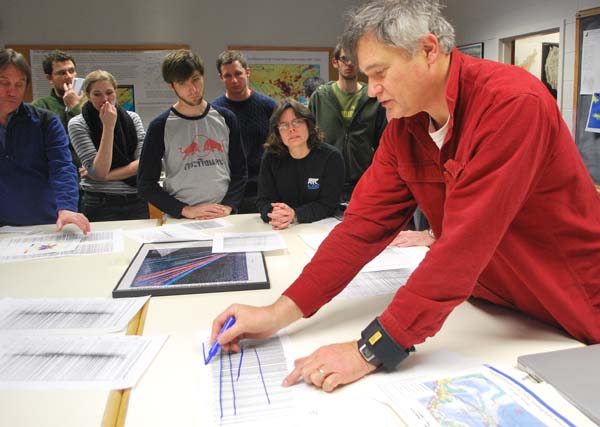 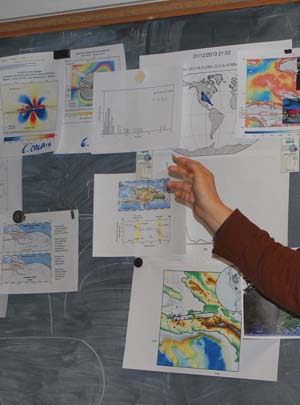 The essence of "discourse over materials" is that multiple sets of eyes, multiple minds, and multiple voices are all attending to the same visual information source. In the photo below, look at the intense focus on some detail on the map in hand, some detail so tiny that the smallest fingernail is called into play to point it out.

In normal conversation, we are accustomed to look each other in the eye, to look at the speaker. But these folks don't look at each other; they are too busy looking at the materials. 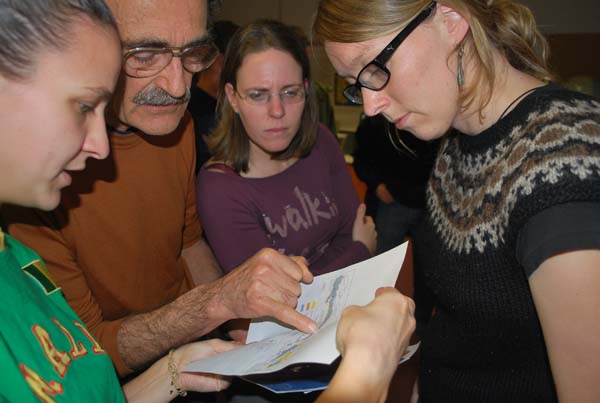 Not being a seismologist myself, it looks to me that record reading is a ritual that helps to inculcate apprentice seismologists into the discipline. Because the data are brand new, no one in the room knows the correct interpretation in advance, and insights could come from anyone gathered around the materials. Senior seismologists share their interpretive tricks and display their tacit knowledge, while students bring fresh eyes, leveraging the power of distributed cognition in an effort to outwit nature's puzzler of the week. Just below the surface, unspoken but compelling, is the realization that this is not an idle academic exercise but an opportunity to inch towards insights that could help humanity become more resilient in the face of natural hazards.

According to Lynn Sykes, the eldest of the village elders among Lamont seismologists, record reading was started by Jack Oliver in the 1960's.

All photographs are by Kim Martineau, Lamont-Doherty Earth Observatory.

The idea that scientific communities have shared rituals that serve to inculcate apprentice scientists into a community of practice came to me from Chuck Goodwin, a cognitive anthropologist and participant in the Synthesis of Research on Thinking & Learning in the Geosciences.

Latour, B. (1987). Science in Action: How to follow scientists and engineers through society. Milton, Keynes, England: Open University Press.

Comment? Start the discussion about Seismologists Gather for "Discourse Over Materials"

« Writers are Made not Born       Going Negative on "Negative Feedback" »