A few years ago, Margie Turrin and I plunged up to our eyebrows into the gory details of the science education standards for 49 U.S. states. We were trying get a handle on how the country was answering the perplexing question "To what extent should human/environment interactions be included in science education?" We coded and tallied instances in which teachers were being told to teach about ways in which the environment impacts humans (e.g. natural hazards or ecosystem services) or humans impact the environment (e.g. pollution.) We wrote two papers from the resulting data, saying in short that there was no consensus on this question, that there was more emphasis on humans impacting the environment than the environment impacting humanity, more emphasis on impacts caused by collective entities (e.g. "society," "industry," "agriculture") than by individuals, and that fragments of human/environment education were strewn across the curriculum in disciplines as disparate as health, character education, tech ed, and geography, as well as science.

Although our lab is in New York, the New Jersey state line is just 100m or so away, and many New Jersey teachers come to our education programs. So when New Jersey undertook a massive revision of their science standards, we couldn't resist taking a look. We found much to admire in the new standards:

If I had to voice a criticism of the revised standards, it would be that some of the standards are mind-numbingly ambitious. To take a somewhat extreme example, 12th graders are supposed to be able to "Demonstrate, using models, how internal and external sources of energy drive the hydrologic, carbon, nitrogen, phosphorus, sulfur, and oxygen cycles." I couldn't do this myself, with a PhD in geosciences and decades of post-PhD learning. Well, of course I could read up on it, and put together a credible story given a few days of lead time, but this is beyond the level of knowledge and understanding that I currently carry around in my head. And that's only one of 25 Earth System standards at the 12th grade level.

Here are examples of elements from the new NJ standards that we coded as "Environment Impacts Humanity." This coding category includes both positive impacts on humanity (sometimes called ecosystem services) and negative impacts (such as natural hazards).

Here is an example of an element that we coded as "Humanity Impacts Environment." This coding category includes collective impacts of "society," "humanity," "industry," "cities," "agriculture," or other non-individual actions and decisions: 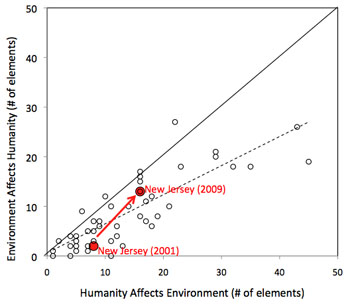 Figure is adapted from Kastens & Turrin (2006). Each data point equals one state. Solid line is a 1:1 line; dashed line is regression line. Red arrow shows change from 2001 to 2009 in the New Jersey standards.
The new NJ standards pay more attention to both how humans affect the environment and how the environment affects humans than did the old standards. The old NJ standards were more heavily weighted towards considering humanity as an active agent, shown by the position of NJ-2001 close to the horizontal axis on the graph. The current standards are more evenly balanced in this regard.

Here is an example of an element that we coded as "Individuals Impact the Environment." 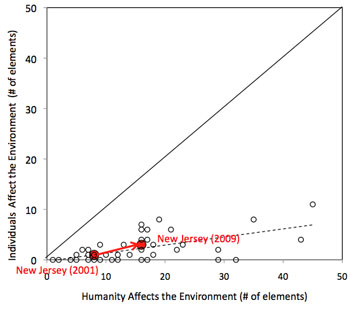 Figure is adapted from Kastens & Turrin (2006). Each data point equals one state. Solid line is a 1:1 line; dashed line is regression line. Red arrow shows change from 2001 to 2009 in the New Jersey standards.
There is less emphasis on individual impacts than on collective impacts of humanity, shown by the position of all states close to the horizontal line in this graph, including both the 2001 and 2009 NJ standards. The NJ elements coded in this category fall in the younger grades, as was typical in the other states.

I look forward to seeing what other states do as they revise their state education standards over the coming years. I would be interested in hearing from New Jersey teachers about how the new standards are playing out in your school districts.

Kastens, K. A., and Turrin, M., 2008, What are children being taught in school about anthropogenic climate change?, in Ward, B., and Menezes, S., eds., Communicating on Climate Change: An Essential Resource for Journalists, Scientists, and Educators, Metcalf Institute for Marine & Environmental Reporting, University of Rhode Island, p. 48-49.

The redesigned NJ standards include both a Content Statement (CS) and a Cumulative Progress Indicator (CPI), which is considered an integral part of the standard. Both parts of the standard were considered in coding.

« Kim's First Lesson on Learning Goals       Is This Just a Phase We're Going Through? »