In an earlier post, I introduced the idea of "hypothesis templates," a device intended to help students learn to generate plausible hypotheses from spatial information. I'm still struggling with the question of how do people, either experienced geoscientists or beginning students, generate meaning from information about the position, configuration, trajectory, orientation or shape of objects or phenomena in the real world. Over the last few days, my collaborators and I have been going through student products from the Lamont Data Puzzle Project, a curriculum development project. Whenever we instructed the students to "Suggest a hypothesis to explain [the observations they had just made from data]," many students struggled and came up with little to nothing.

So today, I offer hypothesis templates for two additional common types of observations.

First, for the situation in which two phenomena, call them A and B, are closely associated in space and time. One issue is how to determine whether A and B are, in fact, "closely associated" at a statistically significant level. I'm not too worried about that at the moment; for the sake of discussion let's say that the spatial co-occurrence is compelling to the naked eye on a data visualization. Once we are in agreement that A and B co-occur, how can we think methodically about possible causes for this co-occurrence?

Generally speaking, the possibilities are that A causes B, B causes A, or some other factor or process causes both. Or, of course, the association may be pure coincidence and have no causal or process significance at all.

To take a geological example, if earthquakes and volcanoes are observed to co-occur, the possibilities are that earthquakes cause the vulcanism, or vulcanism causes the earthquakes, or that a third factor causes both. In this example, all three possibilities are plausible: earthquakes can open up a pathway for magma; movement of magma through subterranean plumbing systems can cause tremors; and on a mid-ocean ridge both vulcanism and seismicity are caused by the motion of the upwelling and diverging limbs of a mantle convection cell. 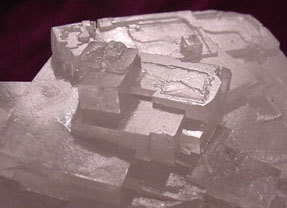 Halite (NaCl) crystals. (image info)
Another type of spatial observation that calls for explanation is that an object of nature or group of objects of nature have a distinctive shape.

It takes a certain level of insight to even realize that shape is something that can be explained, explained by natural processes, rather than just accepted as the way things are. For example, the planar surfaces and right angles of these halite crystals reflect the regular lattice of Na and Cl atoms in the crystal structure--or stated more generally, the external form reflects the internal structure.

A suite of hypothesis templates for explaining shape:

Callan's well- stated and well-illustrated example with the oolites and the clastic grain could be the basis for a new "hypothesis template."

If you observe something spherical or near spherical, possible causal hypotheses are that:
* it got that way by building up in layers, building up evenly on all sides (e.g. hailstone, oolite.)
* it got that way by starting out irregular in shape and had its corners and protrusions abraded off (e.g. quartz sand grain.)
* it formed under conditions where the internal gravitational attraction of the body itself was more than the gravitational attraction of external objects (e.g. a planet, ball bearings made in the space shuttle www.enotes.com/how-products-encyclopedia/ball-bearing.)

In follow-up to my previous comment about a hypothesis template for spherical objects, the Sciences Times today has an article about spherical objects in nature and art: "The Circular Logic of the Universe," by Natalie Angier (http://www.nytimes.com/2009/12/08/science/08angier.html?_r=1&scp=1&sq...