Extracting meaning from spatial data does not come easily for many students. On its surface, a geospatial representation comprises dots, squiggles and blotches of color. The process of turning these dots, squiggles and blotches into a scientific explanation seems woefully underconstrained. Where is a student to start? How is it that skilled spatial thinkers can construct meaningful inferences about causal processes from observations of shape, size, position, orientation, configuration or trajectory of objects or phenomena? What scaffolding can an educator put in place to help a mystified student begin to think methodically and productively about spatial data, without simply telling them the answer?

I suggest that it may be possible and useful to equip such students with a suite of "hypothesis templates" that correspond with distinctive, frequently-observed spatial patterns. For at least some spatial patterns, I suggest that there is a limited set of types of interpretations that geoscientists call on again and again. 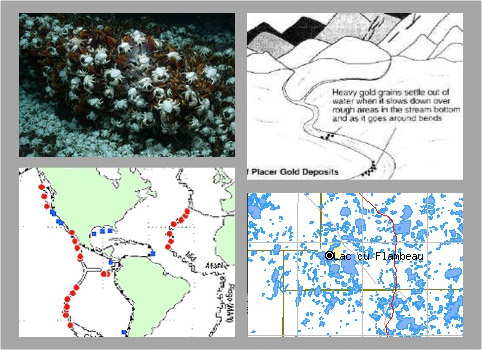 Four examples of phenomena that are clustered in space on the Earth's surface. image source info

For example, it is pretty common to observe that some process or phenomena or type of object is spatially clustered on the Earth's surface. The illustration shows four examples of phenomena that have the same spatial pattern (clustering) but four different explanations: (Upper left) Crabs are clustered at seafloor hydrothermal vents because they are attracted to a food source at that locality. (Upper right) Nuggets of gold or heavy minerals are clustered in slow-moving parts of rivers because their prior transporting process became ineffective at that locality. (Lower left) Hydrothermal vents cluster along mid-ocean ridges because hot magma occurs close beneath the seafloor at that locality. (Lower right) Lakes cluster in the northern half of North America because in that locality the drainage patterns were disrupted by Pleistocene glaciation. 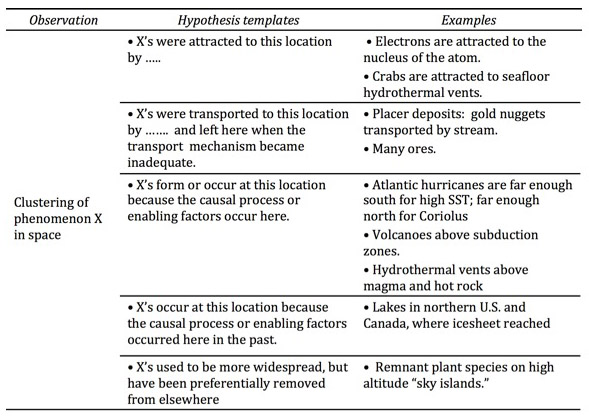 This notion is closely related to the idea of "schemata" in cognitive sciences, described by Ruetschi and Timpf (2005) as "recurring mental patterns that help people make sense of their perceptions and actions." For use in science education, I suggest the term "hypothesis template" to communicate to students and teachers that (a) this is a tool that students can use to create hypotheses or possible interpretations, and (b) it is the students' job to complete the interpretation using the provided patterns as possible starting points. Use of the external scaffolding of hypothesis templates is intended to develop the students' mental schemata until the process of extracting meaning from spatial data becomes more nearly automatic and paper templates are no longer needed.

Research idea: Does providing students with such a "hypothesis template" indeed help them to generate candidate interpretations from observations for phenomena that they haven't explicitly studied?