Haiti as a Metaphor 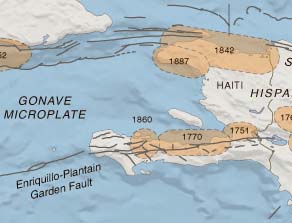 <image info>
I've now put up two blog posts occasioned by the January 12 earthquake Haiti and its aftermath, here and here. Both were upbeat and cheerful, which is to say that neither was an accurate depiction of my actual reaction which was something more between frustration and despair.

I used the Haiti earthquake as the opening day topic in a seminar I teach for students who wish to be science or environmental journalists. In preparation, I read widely in the media coverage of the earthquake, dipped into the geoscience literature about the region, and attended the "record reading" held by the seismologists at my lab. My feeling coming out of all of this was that the Haiti earthquake can be read as a metaphor for the rest of humanity and its relationship with the Earth.

The likelihood, the inevitability in fact, of a major earthquake along the Caribbean-North American transform plate boundary in the vicinity of Haiti was completely foreseen. Even an undergraduate Natural Hazards class at the College of Charleston identified Haiti as an area of high seismic risk in their class project. Knowledge among scientists of the certainty of this danger, and knowledge among engineers and planners of how to construct a society and built environment that would be resilient in the face of the anticipated earthquake, did not translate into effective action--for lots of reasons. Be that as it may, now people are scrambling to pick up the pieces, after the fact, trying to substitute a ton of cure for the unapplied ounce of prevention.

Meanwhile, in the rest of the world, science is slowly but surely accumulating compelling evidence of the high likelihood of other potential devastating impacts of the Earth on human society: climate change, diminishing availability of fossil fuels, fresh water and mineral resources, loss of biodiversity. Our decision-making and priority-setting mechanisms are not picking up on these looming dangers and putting in place the appropriate ounce of prevention. It seems to me somewhere between possible and likely that the rest of humanity will be following in the footsteps of the residents of Port-au-Prince and New Orleans in trying to pick up the pieces and rebuild a society brought low by lack of attention to the workings of nature.

Comment? Start the discussion about Haiti as a Metaphor