Paleoecology: a window into the past

How do we know about past conditions? 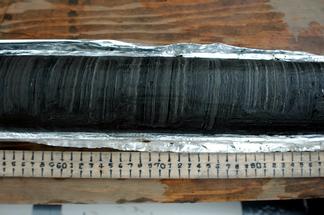 Provenance: Dave McWethy, Montana State University
Reuse: This item is offered under a Creative Commons Attribution-NonCommercial-ShareAlike license http://creativecommons.org/licenses/by-nc-sa/3.0/ You may reuse this item for non-commercial purposes as long as you provide attribution and offer any derivative works under a similar license.

Reconstructing past climatic conditions and the ecological response involves a number of direct and indirect measurements of past change. Direct measurements include ground temperature variations, gas content in ice core air bubbles, ocean sediment pore-water change and glacier extent changes. Indirect measurements or proxy typically come from how organisms (e.g., trees, corals, plankton, diatoms, chironomids and other organisms) respond to changes in climate through changes in growth rates or population numbers. Past changes are thus recorded in past growth of living or fossil specimens or assemblages of organisms. Each proxy represents past change at different scales and resolutions, representing millennial to centennial, decadal and inter-annual variation in conditions. Lake-sediment and tree-ring cores are two of the primary proxies used for reconstructing past conditions for the western U.S.

×
Examples of paleoenvironmental proxy data, spatio-temporal resolution, and range and type of reconstruction.

Provenance: Dave McWethy, Montana State University
Reuse: This item is offered under a Creative Commons Attribution-NonCommercial-ShareAlike license http://creativecommons.org/licenses/by-nc-sa/3.0/ You may reuse this item for non-commercial purposes as long as you provide attribution and offer any derivative works under a similar license. 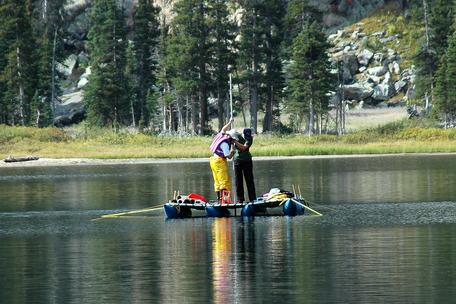 Provenance: Dave McWethy, Montana State University
Reuse: This item is offered under a Creative Commons Attribution-NonCommercial-ShareAlike license http://creativecommons.org/licenses/by-nc-sa/3.0/ You may reuse this item for non-commercial purposes as long as you provide attribution and offer any derivative works under a similar license.
Lake-sediment cores often provide some of the longest records of vegetation through analysis of pollen and charcoal at regular intervals throughout the core. Most lakes in the northwestern U.S. were formed following late-Pleistocene glaciation, and thus they provide a sedimentary record spanning the last 15,000 years or longer, depending on the time of ice retreat. Sediment cores are retrieved from modern lakes (and wetlands) using anchored platforms in summer or from the ice surface in winter. Samples for pollen and charcoal analyses are removed from the cores at regular intervals that depend on the detail and temporal resolution required. The pollen extracted from the sediment is chemically treated, identified under the microscope, and tallied for each sediment level sampled. Pollen counts are converted to percentages of terrestrial pollen and these are plotted as a pollen percentage diagram.

The reconstruction of past vegetation (and climate) from pollen percentage rests on the relationship between modern pollen rain and present-day vegetation and climate. Modern pollen samples have been collected at lakes throughout North America, and this information is calibrated to the modern vegetation and climate. Past fire activity is inferred from the analysis of particulate charcoal, which is extracted and tallied from the sediment cores (Whitlock and Bartlein 2003). High-resolution charcoal analysis involves extraction of continuous samples from the sediment core such that each sample spans a decade or less of sediment accumulation. These samples are washed through sieves and the charcoal residue is tallied under a microscope. Examining these relatively large particles enables a local fire reconstruction, because large particles do not travel far from a fire. Charcoal counts are converted to charcoal concentration, which is then divided by the deposition time of each sample (yr/cm) to yield charcoal accumulation rates (particle/cm2/yr). Detection of fire events involves identification of charcoal accumulation rates above background levels. 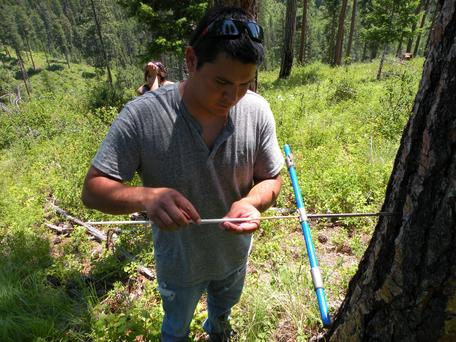 Provenance: Dave McWethy, Montana State University
Reuse: This item is offered under a Creative Commons Attribution-NonCommercial-ShareAlike license http://creativecommons.org/licenses/by-nc-sa/3.0/ You may reuse this item for non-commercial purposes as long as you provide attribution and offer any derivative works under a similar license.
Tree-rings provide records of past change at centennial and millennial time scales and have several features that make them well suited for climatic reconstruction, such as ease of replication, wide geographic availability, annual to seasonal resolution, and accurate, internally consistent dating. Networks of tree-ring width and density chronologies are used to infer past temperature and moisture changes based on calibration with recent instrumental data, recording past change for century to millennia. Tree growth is highly sensitive to environmental changes and therefore tree-ring records are powerful tools for the investigation of annual to centennial variations in climate. Tree-ring chronologies are used to reconstruct past climates such as growing season temperature, and precipitation. The most sensitive trees are those growing in extreme environments where subtle variations in moisture or temperature can have a large impact on growth. For example, precipitation and/or drought reconstructions are often derived from extremely dry sites, or sites at forest/grassland boundaries, where moisture is the strongest limiting factor of growth. Similarly, sites at altitudinal and latitudinal treelines are often targeted for temperature-sensitive chronologies. 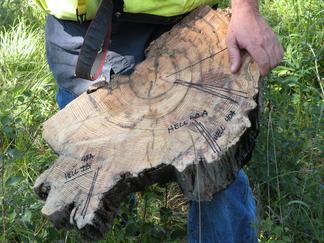 ×
Fire scars are used to reconstruct past fire frequency

Provenance: Dave McWethy, Montana State University
Reuse: This item is offered under a Creative Commons Attribution-NonCommercial-ShareAlike license http://creativecommons.org/licenses/by-nc-sa/3.0/ You may reuse this item for non-commercial purposes as long as you provide attribution and offer any derivative works under a similar license.
The year-to-year variability in individual tree-ring-width series (or other tree-ring parameters such as density) from long-lived stands of trees are combined to produce site histories (or chronologies) that span centuries or millennia. These chronologies contain considerable replication (e.g. two cores per tree, minimally 10-15 trees per site) and dating accuracy is rigorously verified by comparing ring-width patterns among trees, also known as "crossdating". Crossdating also allows tree-ring series from ancient dead wood (found in historic dwellings, lakes, sediments and on the surface in cold/dry environments) to be combined with overlapping records from living trees, thereby extending records further back through time. Statistical relationships established between annual tree ring-width chronologies and instrumental climate records are used to hindcast estimates of precipitation and/or temperature back through time.