Can we reduce the risk of megafires through forest management? 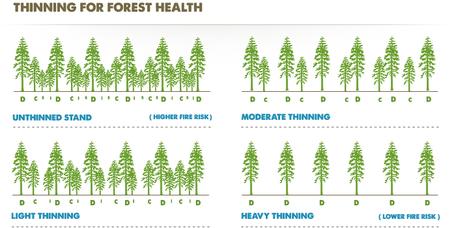 For the majority of the 20th century the Forest Service had a policy of suppressing any sort of wildfire, including low intensity ground fire. Because of this there became a large buildup of small trees, shrubs, and debris. This resulted in a large build up of ground fuels and unhealthy trees that were weakened by overpopulation.As a result there is a ridiculous amount of unhealthy acres of forest, so a fire that in the past would have been a low intensity fire regime with a minimal amount of ladder fuels is today a potentially dangerous and extremely high severity fire. Now we are forced to deal with the issue of what to do with these overpopulated and unhealthy forests. On this page you will find information about how to reduce the risk of fires by using various forest management techniques such as: reducing surface fuels, increasing the height to the base of tree crowns, increasing spacing between tree crowns, keeping larger trees of more fire-resistant species, and more.

Not all fires are the same. Fire severity is measured by how much damage was caused by the fire. Different forests have different reactions to fire. According to an article by Schoennagel et al., there are three different classes of fire regimes produced by different types of forest: High-severity, mixed-severity, low-severity fire regimes 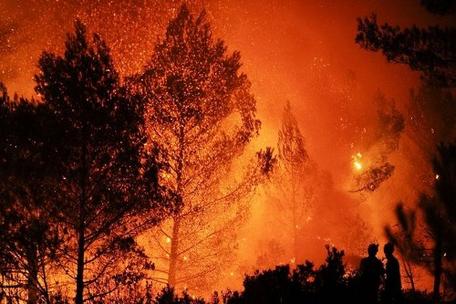 High-severity fires are fires that result in the death of canopy trees, and burn in the treetops. These fires are described as 'stand-replacing' or 'crown fires'. High-severity fires usually occur in high-elevation subalpine forests and consist mainly of Engelmann spruce (Picea engelmannii), subalpine fire (Abies lasiocarpa), and lodgepole pine (Pinus contorta)(Schoennagel et al. 2004). Tree pruning and thinning are effective methods for reducing the risk of high-severity fires. 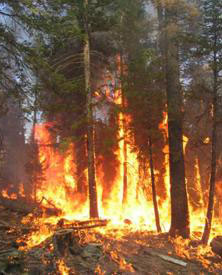 Mixed-severity fires are fires that result in damages in between high and low levels. These fires typically occur at middle elevations and consist mainly of ponderosa pine (Pinus ponderosa), Douglas fir (Pseutdotsuga menziesii), grand fir (Abies grandis), and western larch (Larix occidentalis) (Schoennagel et al. 2004). The best method of reducing the risk of this type of fire is by reducing the ladder fuels in the area. 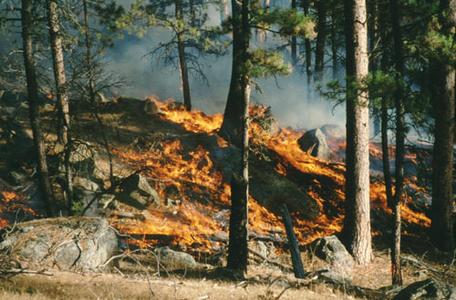 Provenance: http://www.nps.gov/ngpfire/graham01.htm
Reuse: This item is in the public domain and maybe reused freely without restriction.

Low-severity fires are smaller surface fires that usually burn grasses and herbaceous plants. These fires are contained to the litter layer, and do not impact the canopy of the forest. Most often, low-severity fires occur in dry, low-elevation ponderosa pine forests (Schoennagel et al. 2004), however they can also occur in any kind of forest setting, as long as the litter layer is dry enough. The most effective way to manage these types of fires is with prescribed burns.

This is the main way to decrease the potential of a serious fire is through fuel reduction and management. The reduction of fuels not only decreases the risk and severity but promotes a healthier forest as well.

Tree Pruning: rather than removing trees tree pruning can be a good option to keep healthy trees, by removing low lying branches to a level of 8 to 10 feet you can greatly reduce the risk of crowning / torching

Prescribed Burning:There are many different benefits of prescribed burning, it reduces ground fuels, recycles nutrients into the soil, and promotes new growth.

Clear Cutting:This method is very extreme but effective, it is completely removing all the potential fuels from a specific area. Generally only used in high risk areas. 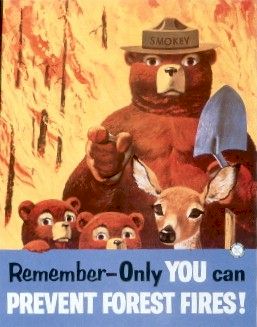 Here is a useful website with some specifics about basic forest management, including thinning.

Here is an in-depth report on fire management.

Follow these helpful details about how to correctly prune trees.

Here is a list and information on which species of trees and plants are beneficial to the forest, and fire resistant.