What are the costs of fighting wildfires? 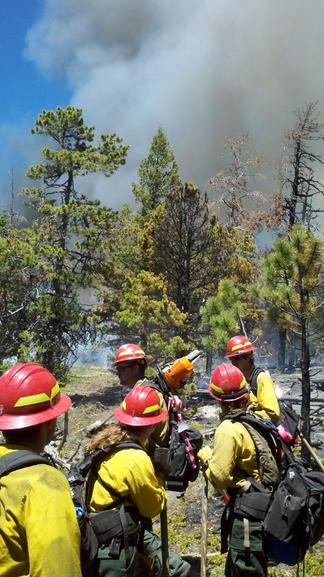 This case study will focus on why there has been a significant increase in the cost of fighting these wildfires in recent years. Data in the last 50 years has shown that there is a link between an increase in fire activity and the costs to fight and prevent fires. We explore the cases of Montana and the Sierra Nevada to illustrate why costs have risen, and relate the rise in costs to increasing residential development and climate change. The types of costs are also explained in greater detail.

The costs of fighting wildfires have gone up tremendously in the past decade. Currently these costs make up almost half of the entire Forest Service's expenses which have reached over $3 billion dollars every year and it is currently expected to increase for the foreseeable future. Much of the direct cost for fighting these wildfires come from suppression services. Suppression services include firefighters from local, state, and federal agencies as well as the protection of private land and urban areas. Protection of private property and urban land is a large proportion of the cost, and expected to rise. Census data from 2010 shows that 84% of all private lands near fire-prone forests in the West are vulnerable to fire (Headwaters Economics, 2013). The following are some troubling facts identified by Headwaters Economics: 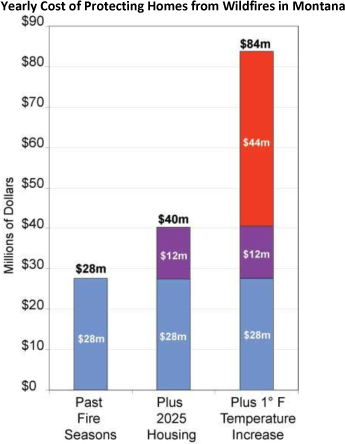 According to data collected on research done on 27 different wildfires that took place during 2006 to 2009, residential development has been increasing in the national forests of the Sierra Nevada. As a result, the costs of fighting these wildfires have increased. A rise in the average summer temperatures s typically associated with an increase in acres burned. For example, an increase in the average summer temperature of 1°F is associated with a 35% increase in acres burned. In the past ten years twice as many homes (approximately 13,000) were within a mile of a wildfire compared to the 1980s or 1990s. This is because the number of homes being built in the Sierra Nevada has significantly increased. Since 1950 there have been 900,000 homes built and 1,500 square miles of undeveloped private land converted to low density development. Nearly one-third of the costs of suppressing fire was due to protecting homes. The total cost of all 27 wildfires during that time was $497 million dollars, of which $127 million were attributed to protecting homes (Headwaters Economics, 2013). 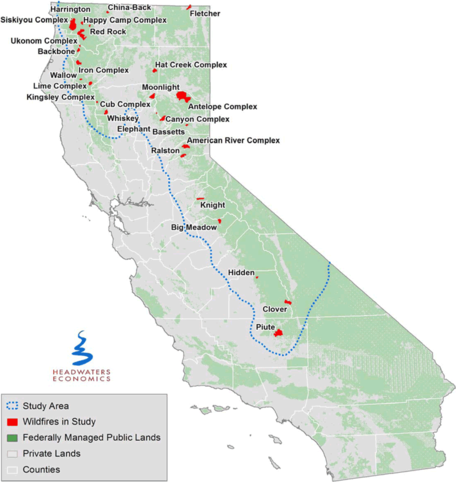 According to the U.S. Department of Agriculture protecting private property from fires consumes 50% to 95% of all firefighting costs. These costs can be attributed to the need for personnel and equipment for use in the suppression as well as other immediate logistical needs of the fire camp. Immediate logistical needs usually include portable sanitation, toilets, showers and sinks. There is also a need for proper nutrition comparable to a government dining facility for military personnel. Another cost is communication and power links, which may require immediate routing by communication and power companies.

Types of Personnel and Equipment Used to Fight Fires

1. Hand Crew / Engine Personnel - these are usually the first resources to perform what is called the Initial Attack (IA) on a fire. In this stage the fire is scouted, sized up and all info regarding the incident is relayed back to dispatch services. At this point, fire line construction may begin.

The cost of these resources can vary depending on the pay scale and experience of the team that is conducting the Initial Attack. Estimated hourly wage is $15 per hour. On average, each 20 member crew works 12 hour shifts, totaling $3600 for 12 hours for labor alone. The costs of nutritional needs that are usually covered on site are not included in that labor calculation, which can easily add up to $1000 per day.

2. Helicopters - Helicopters are the the ground fire fighter's best friend. A helicopter can drop water on areas that ground resources are having trouble extinguishing. Helicopters transport crew members to remote, hard to reach locations. They also ferry equipment and supplies to crews. Ward Hiesterman, a student from The Washington Institute (a national source of fire science education) completed a study on the cost of national helicopter contracting practices that provides more details about the cost of using helicopters in wildland firefighting.

3. Fixed Wing Aircraft - Fixed wing aircraft are the most effective direct-attack fire fighting resource available. Fixed wing air craft have the versatility to start an Initial Attack well before any other resource can reach the fire if it is in a hard to reach area. Planes are highly effective in laying down fire retardant lines over fire fuels, thus slowing the spread of the fire and allowing other resources to strengthen fire lines. The major cost associated with these units is their use of fuel loads and retardant, in addition to personnel assigned to the aircraft team--the pilots and maintenance crews. The National Interagency Fire Center created a fact sheet that explains the costs of airtanker and firefighting aircraft in 2012.

Indirect Costs are not directly associated to direct wildfire action. The Bureau of Land Management outlines some of the costs in a brochure here.

You can visit the following links listed below, produced by Headwaters Economics, to learn more about fire activity suppression and costs attributed:

Here is a link that will take you to a page describing the technical costs of fighting wildfires in Montana, specifically.

This link will bring you to a webpage that highlights the controls of fire suppression, what is being accomplished in the effort to fight the growing cost of wild land fire fighting.