Climate Change and Fire in the Western United States

Fires are becoming more prominent in the Western United States due to climate change. A temperature increase of 1°C is more significant than most people would first think.

Thomas Swetnam, a Professor at University of Arizona and Director of the Laboratory of Tree-Ring Research states, "Lots of people think climate change and the ecological responses are 50 to 100 years away. But it's happening now in forest ecosystems through fire."

By 2050, it is estimated that fires in the West will be twice as deleterious, and in some areas the damages the increase in area burned could be up to five-fold. This predictions are described in more detail in an article from the Denver Post published in April 2013, "Feds project climate change will double wildfire risk in forests."

Basically: the warming climate is diminishing moisture and that in turn is increasing the risk and severity of fires.

Jump down to: Greenhouse Gases & Climate Change | The Effects of El Nino and La Nina | Why is snow pack so important? | We can't stop climate change, so what can we do? | Learning Activities | Related Links | References

In this report we will review the main cause of climate change, greenhouse gases, and their effects which are responsible for increasing fires in the Western Unites States. Our focus will be on the diminishing snow pack and the effects it has on water levels provided to our forests, and the increasing frequency of El Nino and La Nina patterns and the impacts it has on vegetation growth (fuel) and drought. The three images below show changes in the present conditions compared to the past in atmospheric carbon dioxide and snow cover, and the image on the right includes a future projection of temperature change. 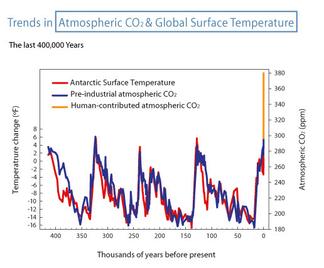 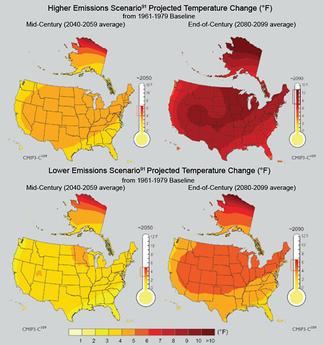 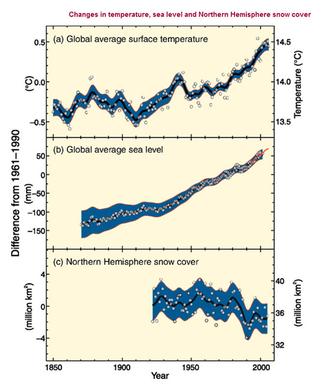 ×
Changes in temperatuer, sea level and snow pack in Northern Hemisphere at: http://www.fs.fed.us/ccrc/climate-basics/climate-primer.shtml

All these conditions have their own impact on our forests regarding how much and how frequently they will burn. As the overall temperature rises even 1°C, the results will be far more drastic than most people realize. An increase as small as this could cause a drastic change in the length of fire seasons and the dryness of the fuel, resulting in a catastrophic rise of the average area burned in a fire season--up to quadruple the amount. We will also discuss different ways to adapt to our changing fire regimes.

Greenhouse gases are naturally occurring gases that trap heat in Earth's atmosphere and gradually make the planet warmer. The most significant of the greenhouse gases emitted by the human population include CO2 (carbon dioxide), CH4 (methane), and N2O(nitrogen). Even though these three gases occur naturally in the earth's atmosphere, our activity as humans has increased the global atmospheric percent of these gases by 39, 158, and 18 percent, respectively. Since 1990, US emissions have increased at an average annual rate of 0.4 percent. This overall warming effect is drying out our forests, and putting them at greater risk of ignition.

Climate Central is an independent group of scientists and journalists that collaborate to provide reports about climate science and how the American public perceives those changes. A 2012 study conducted by Climate Central found that wildfire burn season is two and a half months longer than it was 40 years ago. Longer burn seasons can lead to more acres burned and the increased risk of larger fires to occur.

The Effects of El Niño and La Niña 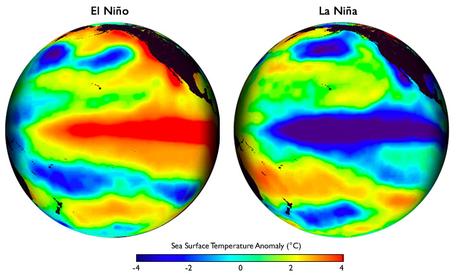 ×
The striking difference between El Nino and La Nina at: http://www.climatewatch.noaa.gov/wp-content/uploads/2009/10/ENSO-states-viz.jpg

Provenance: http://www.climatewatch.noaa.gov/wp-content/uploads/2009/10/ENSO-states-viz.jpg
Reuse: This item is offered under a Creative Commons Attribution-NonCommercial-ShareAlike license http://creativecommons.org/licenses/by-nc-sa/3.0/ You may reuse this item for non-commercial purposes as long as you provide attribution and offer any derivative works under a similar license.

Together, El Niño and La Niña make a fluctuating system of weather and sea conditions around the equator. Around Christmas time, El Niño sets in and brings warmer than average sea temperatures, followed by La Niña's effects with cooler than average sea temperatures. The effects of El Niño and La Niña do not just affect the equatorial area; this system is the most powerful phenomena on the earth and can alter the climate across more than half the planet. El Niño brings increased rains to the Western United States, which increases vegetation abundance and availability. La Niña typically brings in warm, dry weather to the western half of the States. This cycle creates perfect conditions for wildfires. Forests have time to grow during El Niño but once La Niña hits, the forests experience much less rain and sometimes even drought conditions; combining to make abundant, dry fuel.

Reuse: This item is offered under a Creative Commons Attribution-NonCommercial-ShareAlike license http://creativecommons.org/licenses/by-nc-sa/3.0/ You may reuse this item for non-commercial purposes as long as you provide attribution and offer any derivative works under a similar license.
Why is Snow Pack So Important?

According to the Collin's Dictionary, snowpack is defined as follows: "the accumulated snow covering an area that melts in the spring and provides water for irrigation, electric power, etc., usually estimated in millions of acre-feet". How does snowpack uniquely affect the western U.S.A.?

According to the National Atlas, in the west, snowpack gives us up to 50-80% of our water supply for the year, for irrigation, industry and community alike. With rising temperatures comes diminishing snowpack due to a lack of accumulation over the winter. In addition, warmer spring temperatures earlier in the season melt the snow before water is needed. If we don't have the proper amount of snowpack at the beginning of spring, our soils and vegetation will be drier when fire season comes. When there is not enough moisture in the soil when fires come through, the low-lying vegetation burns more quickly, making the larger fuels more accessible. The wetter the fuel, the harder it is to burn: a greater snowpack in the beginning of fire season results in a lesser risk of large, spreadable fire.

We Can't Stop Climate Change, So What Can We Do?

Even if we stopped all greenhouse gas emissions right now, it would still take 100 years for the effects to stop. What are some things we can do to adapt to our changing climate to keep us safe from megafires? First, we can start by building away from fire risk areas. This will save human lives and property, while allowing the forest to burn the way it is designed to by nature. If there is a human presence, the U.S. Forest Service will need to step in and contain the fire, preventing nature from taking its course.

As shown in this guide to being "fire-wise", building with fire-retardant materials is a way to help minimize property damage for structures that are already in a fire risk area. Materials such as clay and composition shingles are good materials for roofing. Stucco and brick are great for outside walls. As far as landscape on residential property, we should clear brush and ground fuels regularly, and water grasses and other plants often to keep them moist. These steps will help prevent a wildfire from bridging the gap between forest and home.

Another way to protect human lives is, counter-intuitively, to let fires burn, as prescribed by Peterson et. al (2011) in this book chapter written about adapting to fires in warmer climates. When we repress wildfires, we inhibit them from doing their job. Wildfires need to burn so that the ground fuels and understory fuels are kept in check. When understory, low level vegetation in forested landscapes and woodlands is allowed to keep building, we are putting ourselves at an even greater risk of megafires and human endangerment. Therefore, wherever possible, we should let nature take its course and thereby protect ourselves, our loved ones, and our properties. Explore a Firewise Home !

Here is a jazzy video clip brought to you by the National Wildland/Urban Interface Fire Protection Program. The video highlights what homeowners can do to protect their home from wildfires, if they live near woodlands or forests. The video covers actions that every 'do-it-yourself' homeowner can easily accomplish.

To learn more about the topics mentioned in above in detail please visit the links below:

Firewise is a community website focused on fire prevention techniques for residential safety.

This is the Firewise quiz! Take it to test your knowledge on fire wise practices around your home.

Learn more about the causes and effects of climate change from NASA on this interactive webpage.

Here is a link to climate change directly related to Western wildfires.

Hot Summers and Wild Fires relates snowmelt and rising temperatures in an easy to understand webpage provided by Student Science.

To keep up on current wildfires in your region, visit Inciweb, a U.S. Government website that records statistical information on wildfires.

Take this quick quiz to test your knowledge on climate change and fires.

How is climate change effecting snowpack?

The effects of ________ in the north western United States cause a warmer, dryer season.

Which of these is NOT one of the three main greenhouse gases?

What are some ways you can be 'fire wise' with your home?

True or False: Wildfires can be directly related to climate?

If you'd like some more practice, here is another short question and answer about fires:Learning Activity: Introduction to Fire in the Earth System (Acrobat (PDF) 3.1MB Apr1 13)

Double Wildfire Risk in Forests is discussed in this article written by the Denver Post.

The Climate Central has a written report about the future Increase in Western Wildfires.

Projected: Double Area Burned, is what the USDA predicts by the year 2050.

Climate Change to Spawn More Wildfires is a story found on discovery.com about earth's systems responding to climate change.