Fires in Yellowstone: Past, Present and Future

The impact of Fires in Yellowstone: past, present and future are important to see the trends in climate change and help us to prevent major fires like there were during the 'Summer of Fire' in 1988. 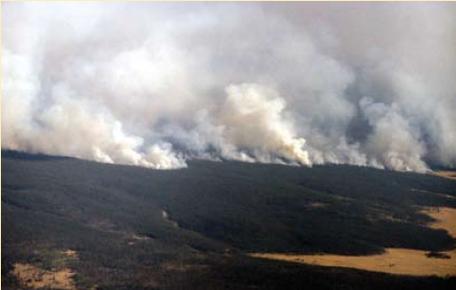 Hide
The Yellowstone fires of 1988 were among the most extensive in the park's recent history and illustrate the interaction of fire with climate change: past, present, and future.

You may know Yellowstone, The World's First National Park, for Old Faithful, its very hot geysers, its multiple falls and the endless amount of recreational activities the park has to offer. Although, At 2,221,766 acres, Yellowstone is home to 67 species of mammals more than 199 species of of exotic plants, 1,150 species of Native plants and a countless number of fires including the biggest fires in America. Did you know that much of the Yellowstone's landscape has been shaped by the fires? After the Fires of 1988, scientists grew to find that even though much was burned down, due to the minerals in the ashes and the sunlight that was able to reach the forest floors after decades, the soil was enriched therefore allowing new plants to be born, which allowed more food for animals. Yes, the fires of 1988 were made out by the media as being horrifying and life threatening to the park. What people were not able to see was that the fires rejuvenated Yellowstone's wildlife and ecosystem. As you continue to read you will learn more in-depth about the Yellowstone: past, present and future fires.

Jump down to: Recent Years | What Might Be | Related Links | References

Long-term history of fires in Yellowstone:

A reconstruction (figure below) of area burned in central Yellowstone over the past several hundred years indicates large fires occurred every 1-2 centuries. Comparison with precipitation reconstructions suggest years or decades when large fires occurred coincide with dry years (see Higuera et al. 2010 for more details). The key result from this study is that large fires in lodgepole pine forests in Yellowstone are not rare events, at least over centennial time-scales. These records suggest large fires will continue to occur once every 1-2 hundred years. 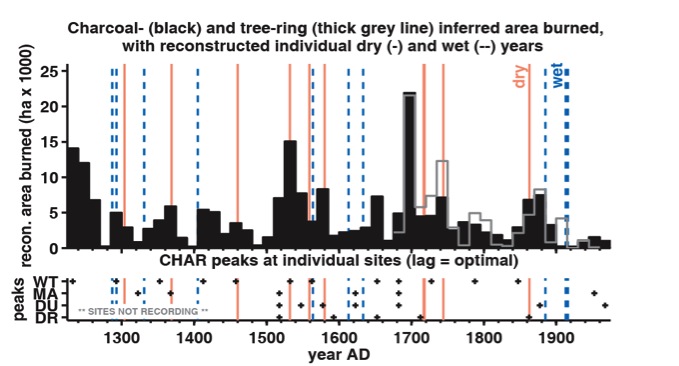 In 1972, Yellowstone National Park (YNP) began a program to allow natural fires to run their course in 340,000 acres contained in two blocks of wilderness in the east half of the park. Later on they expanded the areas to include all portions of the park that were being managed as wilderness. A plan was made from this program to allow fire to occur as usual for 1,700,000 acres of the land in YNP. The plan said that all human-caused fires would be suppressed, and that those fires which were caused by lightning would be assessed individually with a base objective to allow them to burn if circumstances provide protection for human life, cultural resources, resources outside park boundaries, public acceptance, etc. Then during the fire season in 1977 this plan was put to the test. The arrow fire was allowed to burn naturally for 5 days until it began to flare up and spot with the help of strong winds on a clear, dry and warm day. The primary fire was at about 30 acres and then it cooled down quickly by the evening on July 2nd. That night the fire management board decided to begin suppressing the fire. The reasons for this decision were that the fire would reach power-lines in a couple of days and the fire was close enough to the road to cause continual traffic issues as it moved. Up until the second they had mostly positive support for allowing the fire to burn naturally however, as it came closer to the road those opinions began to change due to the inconveniences. (Despain et al, 1977)

About a decade later, the most catastrophic fire event to happen in Yellowstone's past was the 'Summer of Fire' in 1988. For this particular event, weather and drought made the fire behave in unusual ways. The fires which began outside of the park burned 63% of the total acreage of the fires. In Yellowstone itself the fires affected 793,880 acres, which is 36% of the total park acreage.The firefighters were able to save human life and protect their properties. That summer there were 9 fires that took place in order from June to August: Storm Creek, Shoshone, Fan, Red, Lava, Mink, Clover, and Hellroaring. It was one of the largest wildfires in U.S. history.

Here are some facts about 'The Summer of Fire':

What we have learned about these fires from scientists: (NPS, 1988) 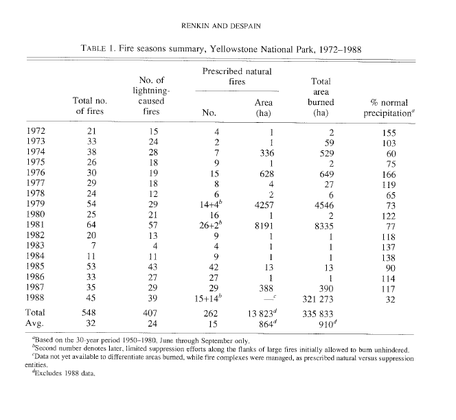 Fires in the past decade:

Although the grand-daddy fires of Yellowstone National Park and its outer boundaries occurred in 1988, the park does have some moderately big fires (2000-5000 acres or so) every 4-5 years. Regeneration in the areas burned by the fires of 1988 has been excellent however elsewhere conditions for fires are now extreme in the park because fuels that were not burned are building up to high amounts.

In the most recent fire season of the summer of 2012, 18 fires have burned throughout the park. The largest of them was the Cygnet Fire that covered 3540 acres. The next largest, Dewdrop Fire covered 1498 acres. The Range Fire came in third at 542 acres.

In 2009 The Arnica Fire was ignited by lightening on September 13th and detected by fire officials on September 23rd in Arnica Creek area north of West Thumb and southwest of Dryad Lake in Yellowstone. The fire progressed from a small controlled fire to a larger 10,700 acre fire due to warm, dry and windy conditions. Fire personnel managed the fire for multiple resource objectives. They allowed the burn to progress naturally in areas where ecological benefits could be achieved in later years after the fire. Fire fighters used helicopters to cool portions of the fire perimeter nearest the areas at risk. Clearing brush around buildings and setting up hose lays and sprinkler systems were also measures used to control the fire. (Incident Information System)

The 2008 LeHardy Fire north of Fishing Bridge in Yellowstone National Park was started by a power line which runs in a utility corridor west of the Grand Loop Road between Fishing Bridge and Canyon. Winds aligned with a creek drainage on the east side of the river prompted steady and rapid fire growth through the afternoon and into that night. Many different crews from all over Montana came to aid in the fire suppression. Yellowstone Park firefighters, West Yellowstone smoke jumpers, two type 1 air tankers, two helicopters and fire engines from surrounding towns as well as additional hand crews were assigned to the fire. In comparison to the year of 1988 which had a dry winter followed by a wet spring and a hot summer of dry lightening and no rainfall, 2008 was a more normal year. It had a snowy winter followed by cool wet spring and a moderate summer. Due to the changes in fire management in the last 20 years and the fire of 1988, Yellowstone National Park is now diverse with different class stands of trees, less fuel and natural barriers to prevent fire spread.

What we may expect to see in the future:

Yellowstone is known for its sporadic fires, so we can expect more to come in the future. Although these fires will be nothing like the fires of 1988. With the dry air, and high fuels that the park has to offer at times we can except to see smaller fires. Due to fires in the recent past, we shouldn't expect to see major fires. Depending on the severity of the dryness during summertime and human activity in the park, prediction becomes a difficult issue.

Here is an article by the National Park Service about the fires of 1988. It includes timelines, and personal accounts of this historic event.