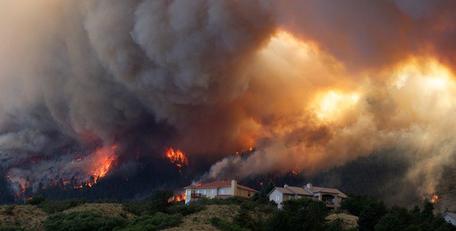 ×
Fire outside of Colorado Springs, CO

Provenance: Ian Strods
Reuse: This item is offered under a Creative Commons Attribution-NonCommercial-ShareAlike license http://creativecommons.org/licenses/by-nc-sa/3.0/ You may reuse this item for non-commercial purposes as long as you provide attribution and offer any derivative works under a similar license.

In 1910, a massive fire event occurred called "The Big Blowup of 1910". The fire spanned several states and over five million acres burned and 78 firefighters died. This led to an aggressive fire prevention policy and a standing slogan in Colorado "All fires out by 10 a.m." These large scale prevention policies have been carried out for many years now and have changed the forest environment. Changes in forest management policy, increased average temperatures, and drought have caused wildfires in Colorado and across the country to be on a rapid increase in both severity and frequency.

How Have Colorado Fires Turned into Megafires?

Fire prevention first started in 1911 with the "Weeks Act". The Weeks Act (Acrobat (PDF) 512kB Apr15 13) was originally intended to reforest much of the eastern states by authorizing the purchase of private land that had been logged, in turn creating national forests east of the Rockies for the protection of watersheds and navigable waterways. But when the bill was in progress, western states did not want to support since it only sent large amounts of funding to eastern states. So in order to get the bill passed, it was agreed that funding for wildfire prevention and other forest service needs would be put in place to appease the western politicians. Fire prevention kept fire size down for about 90 years but it set course for extensive loading of fuels throughout the west. Recently the overgrown areas have exploded in fire. Average acres per fire in Colorado have tripled in the last decade compared to the past 100 years. [1] 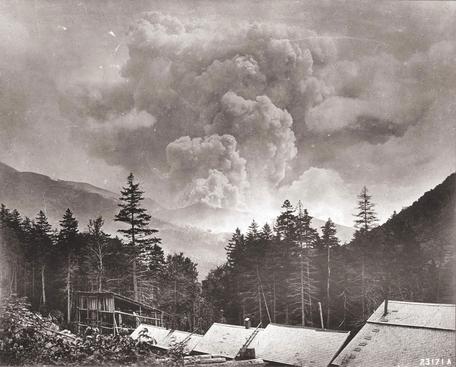 ×
Owl’s Head Fire in New Hampshire’s White Mountains in 1907 influenced lawmakers to include a section in the Weeks Act for fire control.


The trends from these fires have shown that most fires in Colorado are due to drought, increased temperatures and occurred in areas with high severity fire regimes. In fact 13 out of 14 of the largest fires in Colorado history occurred in either 2002 or 2012, two years that experienced major droughts and extreme high temperatures. Severe fires are a new aspect of Colorado life. The Waldo Canyon fire (2012) in Colorado Springs destroyed 346 homes [4] due to development in area that would have been safe to live some 40 years ago without the changes in fire severity and frequency that has occurred in Colorado. Megafires are a new danger to Colorado and 27% of households in Colorado are not in cities [5]*, (*areas of populations of less than 15,000 people) meaning the increased fire danger has the possibility of affecting 1.3 million Colorado residents in the future especially if megafires continue to grow.

The largest megafires in Colorado history have occurred more frequently in the past decade. In 2012, the Denver Post compiled a list of the top 38 wildfires in Colorado history (Acrobat (PDF) 37kB Jan7 14). The largest megafire in Colorado history occurred in 2002: the Hayman fire, which burned 137,760 acres, killing 5 fire fighters, and costing the state around $39 million in damages and containment. This fire happened due to prolonged drought across the Pine County area, as well as prolonged fire containment and uncontained fires. This fire could have been prevented. It was caused by an unhappy girlfriend, who burned all of her ex-lovers letters in an uncontained fire that ended up causing the largest fire in Colorado history. The fire couldn't be stopped due to so much dried out ground fuel as well as overgrown forests.

The High Park Fire just West of Fort Collins was the second largest fire in Colorado history, and occurred in 2012 along with several other megafires in Colorado. The fire burned 87,250 acres, costing $39.2 million dollars to overcome. [3] This fire was too due to a major drought in Eastern Colorado with the most consecutive days in Colorado history with temperatures over 90 degrees. The fire started from lightening and lack of rain in an area that had been ridden from fire for a longer than average time period.

The third largest fire in Colorado history too occurred in 2002 along with the Hayman fire. The Missionary Ridge fire near Durango accounted for 71,739 acres burned and cost $40 million dollars and one fire fighter his life. 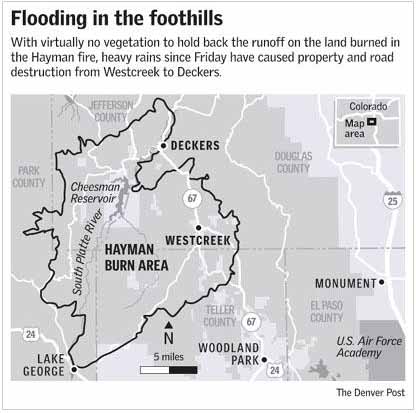 Hide
An example of a notable Colorado fire occurred in the central Colorado area and was known as 'The Hayman Fire'/ The lack of vegetation that resulted from this fire led to widespread flooding in 2012.

Provenance: Neil Laskowski
Reuse: This item is offered under a Creative Commons Attribution-NonCommercial-ShareAlike license http://creativecommons.org/licenses/by-nc-sa/3.0/ You may reuse this item for non-commercial purposes as long as you provide attribution and offer any derivative works under a similar license.

Megafires in Colorado were non-existent until the past 10-15 years but they have now become a natural part of the ecosystem once again. These megafires are putting homes and cities at danger as exhibited by the Waldo Canyon fire. There is a major change in the occurrence of megafires in Colorado and with prolonged droughts still taking place; Colorado is at a major danger with future megafires. 12 of the 15 major Colorado fires were in 2002 and 2012. [2] The link between wildfires and drought are definitely correlated and with less rain in 2002 and 2012 the fires were needless to say, brutal. 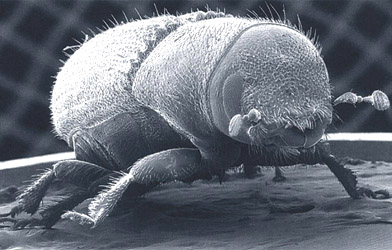 Provenance: Dylan Craft
Reuse: This item is offered under a Creative Commons Attribution-NonCommercial-ShareAlike license http://creativecommons.org/licenses/by-nc-sa/3.0/ You may reuse this item for non-commercial purposes as long as you provide attribution and offer any derivative works under a similar license.
Since 1996 the mountain pine beetle killed 1.5 million acres of lodge pole pine forest in Colorado alone. [6]. There is no doubt that the recent outbreak has had significant ecosystem impacts, however the relationship between beetle killed forests and changes in fire frequency or severity in these forests is complicated. Research investigating the affects of beetle kill on fire risk and hazard suggest risk of severe fires (canopy or crown fires) may slightly increase while dead needles are still on the trees, but then decrease as needles fall to the forest floor and are no longer in the canopy. The results are not conclusive, and question the commonly asserted claim that beetle-killed forests are at much greater risk for large and/or intense fires that pose risk to humans. Research suggests that during severe fire-weather (hot, dry, windy conditions) fires will spread almost equally through both live and dead forests calling into question the perception that dead forests are much easier to burn. [6] How can I learn more?

Blast from the past! Here is an antique brochure about fire prevention (Acrobat (PDF) 1.9MB Apr22 13)

Remember Smoky the Bear? He is back with some current wildfire information.

Here are 11 Facts about wildfires. Did you know all 11?

A real-time fire map of the United States provided by the Forest Service.

If you would like to become aware of what to do in fire situations is Colorado and across the U.S. as fires come closer to homes every day, check out this link and see if you pass the quiz (Acrobat (PDF) 65kB Apr22 13).

Here is an interactive activity that allows you to explore how to be more "firewise": Firewise Communities Quiz.