Despite being the driest continent in world beside Antarctica, Australia ranks 6th for the amount of forested land. The combination of large forests and hot dry climates gives Australia high risk of having megafires. This web page explains how Australia works to reduce the risk of megafires through fuel management. 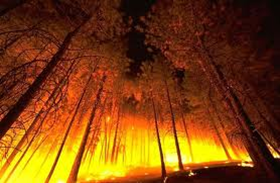 ×
A wildfire rips through the understory of a forest.

Australian fuel management and wildfire policy focus on training willing home-owners to protect their homes against an active wildfire. Australia also puts a lot of focus on fuel management through prescribed burning.

Scott Stephens, Associate Professor of Fire Science and co-director of Berkeley's Center for Fire Research and Outreach says, "What the Australian strategy does is actively engage and help home-owners to become part of the solution rather than just needing to be evacuated."

Supporting Australia's fuel management policy is important because what happens there affects us here. Australia has some of the largest carbon banks on Earth, as represented by their enormous tracts of forest. This large amount of vegetation helps to drastically reduce climate change and maintain water supplies worldwide.

Australia's environment is naturally fire prone and has been for millions of years. Australia is a generally large, mostly flat, dry, and warm continent containing many different types of environments and forests.

On the northern part of the continent you'll find a large savannah region with a monsoonal climate (wet-dry).

In the southwest there is a region of eucalypt forests, woodlands, and shrub-lands. The climate in this area is similar to a Mediterranean climate.

In the eastern regions you will find forests and woodlands. The climate there is somewhat Mediterranean with dry summers due to high evaporation. 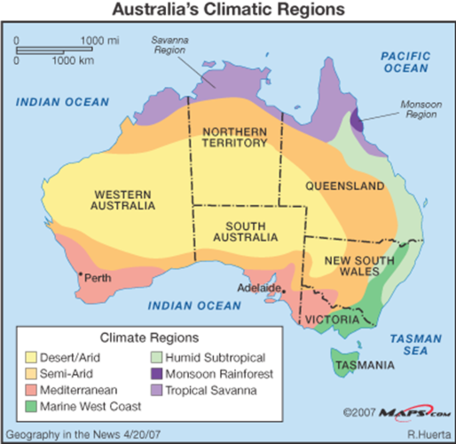 A large portion of the continent is either arid or semi-arid, and the continent includes both tropical and temperate regions. There is a large presence of hummock grasslands and Acacia shrublands. Australia is well known for its high level of woody plant genera known as Acacia and Eucalyptus.

As previously mentioned, Australia is naturally a very fire prone continent. Its natural ecosystem has evolved with fire; some species of plants will stay dormant in their seed form until a fire occurs. Australia's people have ignited and lived with landscape fires for perhaps 60,000 years.

Fire regimes and their effects are wide ranging. Fires occur with a mean interval of 1 to 2 years in parts of the savannah in the tropical north and of the order of 300 or more years in the temperate rainforests of the southeast. Fires occur at all times of the year in some part of the continent. Peat fires, which occur especially in Tasmania, can have long-term ecological significance, but are not widespread on a continental scale.

Australia has about 149 million hectares of forests which is equivalent to 368 million acres.

Fire and Fuel Management in Australia and New Zealand

Although Australia and New Zealand have quite different fire climates and fuels, the common understanding of fire behavior underlies many facets of fire management in both countries. Fire management is the legal responsibility of various government land management agencies that manage public lands and individuals. Volunteer bushfire/rural brigades have been formed throughout rural and peri-urban areas and are coordinated by rural and metropolitan fire authorities for specific activities such as fire suppression and fuel management. During the last two decades there has been an increasing interaction between both Australia's and New Zealand's rural and land management fire agencies; exchanging fire management practices, lessons learned, common incident command systems and more recently, through partnership in their research programs (Gould 2006).

These two countries face a similar array of challenges in meeting their fire management objectives and the task is becoming increasingly difficult. As overarching services provided by governments, fire management has been subject to financial pressures, resulting in staff reductions and erosion of traditional levels of fire management resources. Resources are declining at a time when demands for protection by the general population are increasing.

Concurrently, the demands for ecologically appropriate fire management practices and concerns about the long-term impacts of prescribed burning have led to the suggestions that, in some areas, fire is adversely affecting biodiversity and long-term sustainability of natural ecosystems. These changes are part of the debate about how fire can affect climate change, greenhouse gas balance at the landscape and national level, and whether such changes are being inflated by fires (Gould 2006). One look at the image below of fire/no fire around the world illustrates the large role that fires have in Australia. 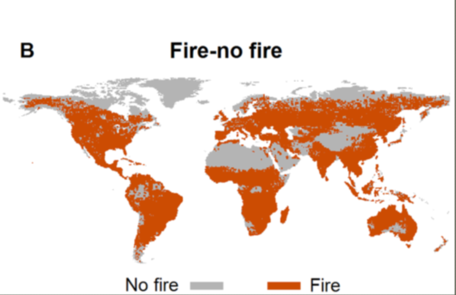 Prescribed burns are the main way that Australia controls wildfires

There are three types of controlled burns:

1) Hazard Reduction Burning - Hazard reduction burning will reduce the total load of fine fuel and is also effective in reducing the height and flammability of elevated fine fuels such as shrubs and suspended dead material.

3) Ecological burning - The main aim of using fire for ecological management is to provide an appropriate fire regime (of specific fire frequency, intensity, seasonality and patchiness) to meet specific goals for the management of a particular species, population or community (e.g. as part of a recovery plan for a threatened species)(Gould 2006).

Should the U.S. adopt Australia's policy: "Stay and Defend or Leave Early" (SDLE)? 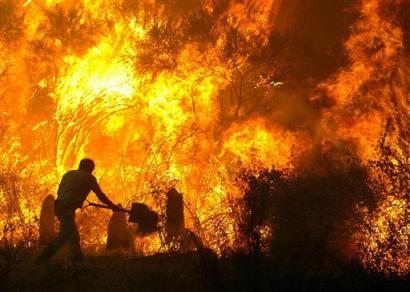 ×
In a seemingly futile effort to extinguish the fire, a man uses a shovel.

In Australia, the "Stay and Defend or Leave Early" (SDLE) approach is that residents should decide well before a fire whether they will choose to leave when a fire threatens but is not yet in the area, or whether they will stay and actively defend their property during the fire. SDLE also strongly encourages residents to make appropriate preparations in advance for either staying or leaving. (McCaffery 2010)

We identified four factors that influence how appropriate the SDLE approach might be in the United States:

1. Nature of wildfire risk. One lesson from Australia is that SDLE is most relevant and most likely to find a receptive response where the risk is higher and where there is a perception that wildfire poses a major threat to communities.

2. Agency roles and responsibilities. In Australia, firefighting organizations are limited in number and primarily are state-based. In addition, the federal government has only a limited role in firefighting and local fire brigades are centrally coordinated at the state level. This allows for consistency as new policies and approaches are introduced.

3. Education and shared responsibility. Ensuring that people understand what is required in deciding whether they should stay and defend or leave early is a complex task. In Australia, fire authorities, local government, and the media make extensive efforts to advise residents about the implications of the choices they face and to assist residents in developing their plans.

4. Human dimensions and decision-making. It is important to understand how people responsible for dealing with a wildfire think of and perform their roles and how the people at the individual, household, and community levels perceive and respond to the wildfire risk. The best possible response to an emergency may be undermined by denial of the risk, optimism bias, oversimplification, and so on. Even the decision to leave early involves complex and difficult decisions and the ability to adapt to unexpected circumstances such as not being able to leave.

Because more and more people are living in fire-prone areas where fire is a natural part of the ecology, communities that want to be truly fire adapted should consider the merits of SDLE. (McCaffery 2010) 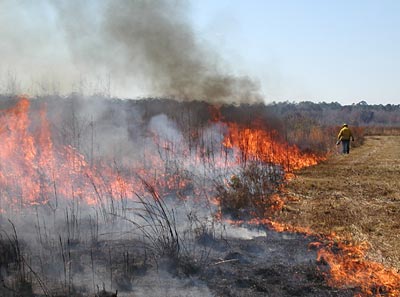 Fire Management- Voluntary guidelines- Principle and strategic guidelines. This link provides information about wildfires, How to help prevent them and what the average person can do to help.

Watch a YouTube video on fire management in Australia.

Fire and Conservation Practices of the Nature Conservancy, showing their fire management practices.

Fire Situation in Australia Another United Nations assessment that describes the environments of Australia, discusses the variety that exists in fire regimes, and related statistics on fire occurrence.

McCaffrey, S. (2010). What can the u.s. learn from the australian stay-and-defend-or-leave-early approach to fighting wildfires?United States Forest Service.