Fire! Captivating, yet with great potential to be dangerous and destructive,has been burning many ecosystems since the first appearance of plants on land. This webpage focuses specifically on massive fires that have plagued Australia in the past and examines the damages that fire has on the ecology of the plants and animals in the land down under. 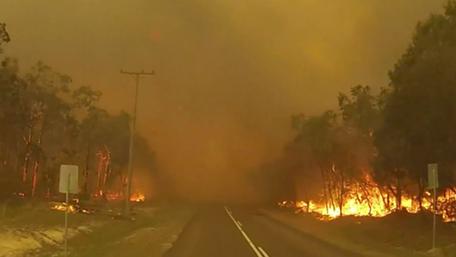 Provenance: nbcnews.com
Reuse: This item is offered under a Creative Commons Attribution-NonCommercial-ShareAlike license http://creativecommons.org/licenses/by-nc-sa/3.0/ You may reuse this item for non-commercial purposes as long as you provide attribution and offer any derivative works under a similar license.

To better understand forest fires in general lets begin with identifying what leads to and causes forest fires. For any fire to occur they needs to be a fuel, oxygen and an igniter. The highest times of danger for forest fires occur is when there has been extended periods of dryness, known as a drought. When there as been a drought the fuel, such as dead brush, trees, bushes and other plants become very dry and are much more prone to catching fire. Areas such as rainforest catch fire much less because they are generally to wet to sustain a large fire. For any fire to start there needs to be an igniter, igniters range from lightning, sparks from machinery or campfires or in some cases people will intentionally set fires to forests. "The only natural cause of fire is lightning, which was responsible for about 45% of all forest fires in the 10 -year period from 1990 to 1999. Humans were responsible for the remaining 55% of fires that MNR fire fighters were sent to put out." (What are the Causes of Most Forest Fires?) Out of the human caused fires more than half are caused my recreationists and rural residents, most of whom are irresponsible with their campfires.

Show What is a Megafire?

What exactly is a "mega-fire"? Many say that they are fires that have great intensity and burn hotter, larger and longer than any fires ever seen before in history. The truth is that 'megafires' are just large fires that, because they are having a significant impact on humans and human environments, are receiving more and more attention. Large fires have occurred for thousands of years yet because they had little impact on humans, were rarely noticed. Today, as humans occupy more and more landscapes around the world, large fires, some naturally caused and others a consequence of human-set fires (accidental or deliberate) are posing great risk to humans and human settlements. All definitions of a 'megafire' center on the cost to human lives and resources and typically have little direct link to the ecological impacts. Recently a 2008 paper published by Jerry Williams helps to state the characteristics of a mega-fire label:

After reading through many definitions we devised our own working definition to be: A mega-fire is a fire that causes significant damage to the ecosystem that existed before the fire that inhibits that ecosystem to fully restore itself, burns homes and public buildings giving the fire a "price tag", takes lives (both human and animal populations) and can not be contained or controlled by fire squads sent to extinguish the blaze.

Killing 173 people and effecting 430,000 hectares of land black Saturday was the worst fire in Australia's history. It was February 7, 2009 and Victoria was in an intense heat wave combined with harsh winds up to 62 mph, the conditions were perfect for a fire. By mid day Melbourne, the capital city, experienced record setting temperatures reaching 115 degrees Fahrenheit. With these conditions, which were worse than Ash Wednesday and Black Friday, the resulting fire was also bigger and more devastating than both previous events. The fires hit over 2000 properties, destroying over 3500 structures in towns along its way. Black Saturday does not refer to one fire but several, in fact the major fires occurred in 14 different geographical regions of australia. Some of the fires were ignited naturally while others were human caused when power lines and machinery sparked and ignited fuels. The fires were so intense they created pyro cumulus clouds making the sky look black. Overall 414 people were injured and 7562 people were displaced from their homes. The Victorian wildfires of February 2009 are ranked in the top 10 most fatal fire events in the world. 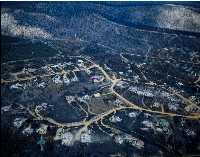 Many knew that 1983 would be a bad year for fires in Australia but few knew what would happen on February 16th. Australia was going through a ten month drought, only after some on the lowest winter and summer rainfall totals. Water supplies in many places were very dry, and the usually moist summer was arid. Ash Wednesday began with a cold front coming from the coast of South Australia, which caused hot air from the centre of Australia to be drawn southwards. A hot and dry northerly wind wrecked havoc on the fire prone Victoria. Temperatures rose to over 40 degree Celsius and the air moisture dropped to 15%. Humidity levels for this time of year were usually 43%. At the start only long narrow fires were created, being pushed south, and 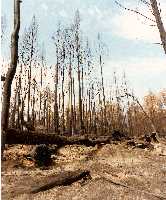 Hide
Photo courtesy of the Victorian State Government Department of Environment and Primary Industries
then the unexpected happen. The winds suddenly changed direction, going from a southern wind to a western wind. This was disastrous. The long side of the fire became the head and created a much wider front. Fires began to merge together and there was little firefighters could do to control the damage. Another issue was the 200,000 tonnes of dried soil lifted by the winds, creating dust storms that made visibility extremely poor. Melbourne was blocked out by the sun and the dust clouds made it almost impossible to see a fire coming. After the day of burning 210,000 hectares were burnt, 47 people lost their lives, and 200 million dollars of damage was done. Most of the damage came only an hour after the winder change. The 16,000 firefighters were no match for the immense fire front. Most of the fires were caused by electrical power lines colliding with trees sending them up in flames. The burning of the protective vegetation also created massive soiling erosion affecting many streams and water catchments.

The Australian forest fires of the past have had an array of effects on the ecosystem. Many of these are surprisingly not harmful to the evolved organisms that make up the ecosystem. The plant and wildlife communities are very well adapted to either withstand the intense flames or recover in a relatively quick amount of time. Flames reach up to 900 degrees Celsius and native vegetation is amazingly able to recover time and time again. The plant species have been able to develop methods that lead to prolonged existence through even the worst of forest fires. Many species are able to sprout from rootstocks and stems as well as grow from seed planted in the soil. Species like the banksias and eucalypts are able to release seeds from woody fruit on their branches. The fires provide a surprisingly ideal environment for all these species to germinate and grow. There is a period of enhanced light and available resource as well as reduced competition from other dominating species of plants. 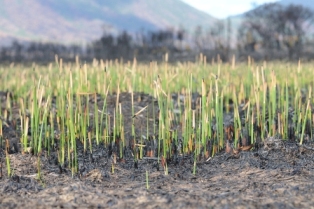 These fires prove to be no threat to biodiversity in the environments of Australia, but some environments, which are not adapted as well, may be destroyed from fires like those in Australia. In ecosystems like rainforests, that have a low tolerance to fire must be protected.

The many wildlife populations that make Australia, much like the plant species, have adapted to be able to withstand forest fires. The birds and some other animals have learned to flee from the fires with amazing speed. Many mammals and reptiles take refuge underground, in un-burnt patches, and in wet gullies. Many of the post fire environments have proven to be ideal for many species. The lush and diverse plant environment is the bottom of the food chain and feeds from the bottom up.

Immediately after a fire there are many reductions to the wildlife populations. Most populations recover. Many animals are vulnerable to the shortage of food and increased predation. Studies have shown that the Mountain Pygmy Possum population is one that is especially vulnerable to the immediate post fire environments. 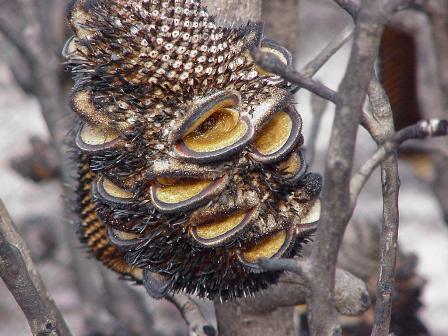 Bushfires effects on the soils are very dependent on the fires intensity. Immediately after most fires there is a flush of some nutrients. This exposed the soil to wind and water which make them very susceptible to erosion. Fires affect stream quality, erosion causes ash and nutrients to be transported into the streams. These all increase the sediment load and the turbidity of the water, creating a sediment slug, see picture on right. This environment proses a major threat to aquatic biota. Fires also have a influence on the amount runoff given of by a forest. The quantity of water produced by a burnt area initially increases, with little vegetation and little entrapment. Later on in time, however, high water use and entrapment by vegetation can reduce water yield.

Although there are some short term harmful effects to the ecosystems of Australia following a forest fire, the long term effects seem to be un-harmful and in fact productive to the ecosystems.

A great way to learn more about the Victorian bush fires in Australia is to visit Victorian State Government Department of Environment and Primary Industries Web page. This site gives a comprehensive overview of all the major fire events throughout Australian wildfire history and has many links to reports that discuss damages, affects on ecology, and the fires themselves. 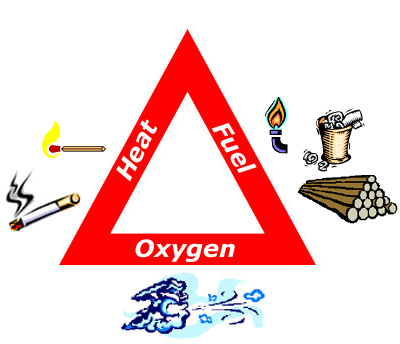 Provenance: Photo courtesy of Southwell School of Learning
Reuse: This item is offered under a Creative Commons Attribution-NonCommercial-ShareAlike license http://creativecommons.org/licenses/by-nc-sa/3.0/ You may reuse this item for non-commercial purposes as long as you provide attribution and offer any derivative works under a similar license.

To see and learn more about the nature of Australian bush-fires watch this YouTube video (ages 12+).

This BBC production shows a common bush fire as well as the many challenges and obstacles faced in trying to limit the amount of damage done to infrastructure.

This is Jerry Williams' paper that helps state the characteristics of a wild fire. In this report he analyzes how mega-fires are making ecosystems that have traditionally had fires throughout history less resistant to fire because they are occurring more often and with higher intensity.

An Australian Disaster: The 1983 Bushfires

This report displays a comprehensive overview of the 1983 bush fires. Not only does it discuss the fires but also discusses the impact it had on the communities and people of the area it devastated.

About Fire Ecology: An Overview

This .pdf file explains how fire shapes the natural environment of Australia's state of Victoria, how patterns of fire influence the plants and animals of the state and how the state's fire program plans to achieve ecologically appropriate fire regimes on public land.