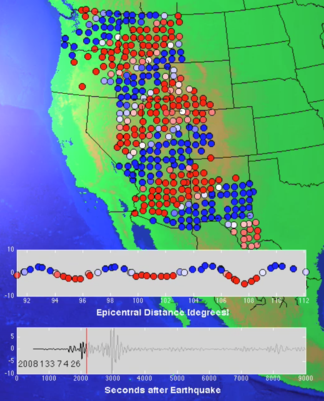 ×
USArray animations show how the ground responds when seismic waves from worldwide earthquakes sweep across more than 400 sensitive seismograph stations of (USArray ), the seismologic component of EarthScope. Each animation has a map of the active USArray grid at the time of the earthquake. These animations are a creative use of the data being received by this unusually dense array of monitoring stations that were deployed as a means to "image" the roots of our continent. This notes document can help educators to give context to the animations. 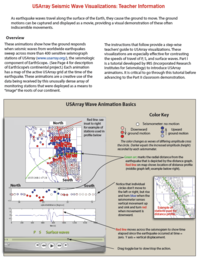 Provenance: Robert Butler (University of Portlant)
Reuse: This item is offered under a Creative Commons Attribution-NonCommercial-ShareAlike license http://creativecommons.org/licenses/by-nc-sa/3.0/ You may reuse this item for non-commercial purposes as long as you provide attribution and offer any derivative works under a similar license.

These animations could be used as part of a unit on earthquakes and seismic data as an example of how geoscientists are working to better understand the structure of our Earth, particularly the North American continent. Learners should already know about P, S, and surface seismic waves.