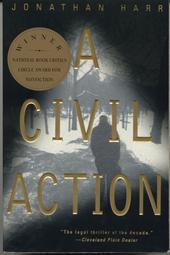 
In 1976, at the age of four, Robbie Robbins was diagnosed with acute lymphocytic leukemia. He was one of 28 children who contracted the disease between 1964 and 1986 in Woburn, Massachusetts, a Boston suburb of 35,000 people. Learning that two nearby municipal wells were contaminated with toxic chemicals, Donna Robbins and Anne Anderson with other concerned residents formed the citizen group 'For A Cleaner Environment.'

In 1982, a year after Robbie Robbins and Jimmy Anderson died, Donna Robbins, Anne Anderson, and six other families in east Woburn filed suit against two local companies, W.R. Grace & Co., owner of the Cryovac Plant that manufactured food-processing equipment, and Beatrice Foods Inc., owner of the John Riley Tannery. The lawsuit, filed by their attorney, Jan Schlichtmann, alleged that improper disposal of the toxic chemicals trichloroethylene (TCE) and perchloroethylene (PCE), which were used by the defendants, polluted the local ground water that flowed to the two municipal wells, was distributed in Woburn's water-supply system, and consumption of the polluted water caused severe illnesses including leukemia.

The book details the dedication and triumphs of the citizen group, the stress, strain, and disdain of the plaintiffs, the legal maneuvering and shenanigans of the attorneys, and the confusion of the judge and jury over the experts' testimony about the hydrologic role of the Aberjona River and arrival times TCE and PCE in the wells. After nearly 80 days of trial spread over a four-month period and more than a week of deliberation, the jury found W.R. Grace & Co. liable and Beatrice Foods, Inc. not liable for contaminating the two municipal wells. Following a defense motion for a re-trial that the judge indicated he would grant, the plaintiffs reached an out-of-court settlement with W.R. Grace & Co.

Following the trial, U.S. EPA identified five properties (including those of the two defendants in the trial) near municipal wells G and H that contained substantial concentrations and quantities of the same two toxic chemicals. Clean-up activities at the five properties within the Woburn Wells G & H Superfund Site continue today.

Who's Who in the Woburn Toxic Trial

View a list of the people involved before, during, and after the Woburn Toxic Trial.