Hide
Figure 1 A typical rock glacier from Alaska, Jumbo Creek Rock Glacier, near McCarthy, Wrangell Mountains. This is one of the features observed in the early 20th Century by Capps (1910). The steep front is distinctive for an advancing, active rock glacier flowing down the valley axis This is a 'tongue-shaped' or 'valley floor' rock glacier. Details 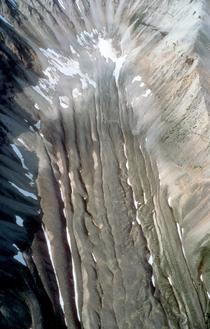 Hide
Figure 2 National Rock Glacier, Wrangell Mountains, Alaska. There is no glacier visible at the headwall of the cirque here. There probably was a small distinct glacier below the cliffs but only remnants now remain. The glacier ice is now buried under the slow-moving surface debris. The debris input from the headwall and sidewalls form what are essentially lateral and medial moraines. Details 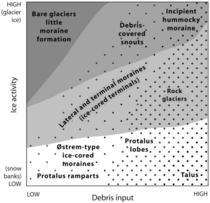 Hide
Figure 3 A schematic diagram showing how various topographic forms, including rock glaciers, could be produced by varying amounts of ice and weathered rock debris onto a glacier surface. Although not discussed here, the other features named relate to the relative proportions of ice and debris. Thus, if a glacier is active and the debris input is not high, then moraines can form but if the debris input is high and ice activity (volume per year or flux) declines then a rock glacier may form. From (Whalley, 2009). Details 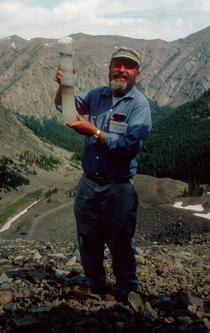 Hide
Figure 5. Marinet Rock Glacier, Alpes Maritimes, France. The glacier has now retreated back into the cirque but a portion of the glacier with a heavy rock debris cover has advanced down the steep slope as a rock glacier. Much of the debris of the rock glacier probably still contains a remnant glacier ice core. Details

Rock glaciers are best defined by their topography (Fig. 1) and that they flow slowly. Their dynamic character is attributed to the flow of ice deforming the associated weathered rock debris. Typically, they flow along the center-line of a valley in mountainous regions and have a glacier-like appearance. Usually, an 'active' rock glacier has a surface velocity of 1 ma-1 or less. If they no longer flow then they are considered 'inactive' or 'relic', especially if, in the latter case they show signs of blending with local vegetation. They were first described in North America from Alaska and Colorado in the first decade of the 20th century (Capps, 1910; Howe and Cross, 1906); one of the original names for them was 'block-streams'. Descriptions of rock glaciers can be found in many geomorphological and geological textbooks as well as in Wikipedia. Although textbooks may provide descriptions, they may not always agree on the explanations for their genesis and flow. This difference is also mirrored by the many papers discussing rock glaciers and their related forms. This difference is in accounting for the way in which ice deforms the rock debris. When considering active (flowing) features, there are two main models.:

This ('zonal') model ascribes rock glaciers to permafrost regions, where the mean annual air temperature (maat) allows 'discontinuous permafrost' to occur, i.e. < -2ºC. Ice is held in the pore spaces of talus material or perhaps in ice lenses, both being associated with permafrost development. This model is also called the 'ice-cemented' rock glacier model for this reason. The low flow rates are attributed to the creep of ice in the pores and ice lenses. In this model rock glaciers are usually found in continental climatic regimes where there is low precipitation and rather extreme temperature ranges. From this point of view rock glaciers are associated with the zonality of permafrost (Washburn, 1979).

It may be that pore spaces in the debris from glaciers (moraines) become saturated with ice and that rock glacier flow can indeed develop in such bodies. However, proponents of this model deny that the ice of glaciers has anything directly to do with the genesis of rock glaciers (e.g Haeberliet al. , 1979). Some authors do not consider this an appropriate mechanical model to enable rock glaciers to creep (Whalley and Azizi; 1994, 2003). Although there may be some reasons for this model there is certainly plenty of evidence for the presence of glacier ice in some rock glaciers (e.g. Potter et al., 1998). The remainder of this vignette is concerned with a second model of rock glacier formation and flow.

This ('azonal') model ascribes rock glaciers to the flow of small and thin relict glaciers where the ice has been protected from ablation (melting) by the debris cover. According to this model there is no necessity for the presence of permafrost. Many glaciers flow to lower altitude locations where there is no permafrost. In other words, the feature can cross climatic zones (and so is not necessarily indicative of a particular climatic zone; Washburn, 1979). This model can be said to be 'inclusive' as it does not require the 'permafrost or nothing' notion.


Most authors follow one or other of these ideas. However, there is also a view that some rock glacier-like features have formed as a result of single-event rockslides. Some rock glacier features could indeed have been formed this way (as some of the early geologists in Colorado thought) but this is not usually considered as a major formation mode. This model will not be discussed further here, other than to say that some of the debris that provides a cover on rock glaciers of Model 2 (glacial) could have been derived from single-event rock slides or major rock falls. This debris supply to a glacier surface is important to the following discussion.

Formation and Mechanics of the (azonal) glacier flow model
In essence, the 'glacier model' can be separated into the following stages:
1. Small and thin, less than about 50m thick, glaciers (usually in cirques/corries) accumulate debris on their surfaces from the surrounding valley sides. This may occur at the early stages of glacier growth or, especially, as it decays.
2. This debris 'blanket' impedes ice ablation (by as much as 90% in the summer, depending on maat and the number of days with temperatures above freezing, i.e. 'positive degree days').
3. The glacier ice continues to flow (rock glacier snouts may extend downhill as the ice still flows) although this will increasingly slow as the ice body thins, even under its insulating debris cover.
4. Ice input at the headwall area may be reduced, and eventually totally cut off (Fig. 2 gives an example).
5. The protected glacier continues to flow, perhaps with increasing debris input as the cirque backwall area that contributes debris increases.
6. The debris cover is moved down towards the snout and accumulates, perhaps impeding the glacier flow as the shear strength of the piled-up debris increases.

In essence, the glacial model depends on simple mechanics. Ice flows or 'creeps' following a flow law (usually called 'Glen's Law'). This is temperature dependent; the warmer the ice (up to the pressure melting point) the faster it flows. At a given temperature, the two components that promote creep rate (i.e. flow velocity) are: i) the surface slope and ii) the thickness of the ice. These are not linear effects. Velocity is proportional to the third power of the glacier surface slope and is also proportional to the fourth power of the thickness. For a given surface slope, a down-wasting ice body (under its insulating blanket) can be maintain low velocities. Without the debris cover the ice would melt away – which is what we generally see in small glaciers without the debris cover.

This model can be envisaged in terms of a balance of two inputs: glacier ice and rock debris. The former melts away but the debris accumulates. We might think that the relative proportion of ice and debris into the system could give different landforms. Indeed, this is exactly what the model proposes. Figure 3 shows a number of these features and how they and rock glaciers might fit into a (rather fuzzy) spectrum ranging from bare glacier ice to talus.

At least some rock glaciers do indeed have glacier ice cores (despite the controversy about the model's validity, see below). Figure 4 shows an example, from Galena Creek Rock Glacier, of an ice core showing typical banding due to the winter accumulation of snow that was turned into the ice of a small glacier, later to be covered by debris.

Glaciers producing rock glaciers
Another example of a rock glacier is shown in Fig. 5 and can be explained by the six 'stages' listed above. The distinctive steep snout is advancing over the marshy-grass forefield. Behind the snout the transverse ridges and furrows (compare with Fig. 2) show compression of the rock glacier rubble at the snout. This rock glacier has been considered to be of permafrost origin (Evin et al. 1990) but a simpler explanation is that the debris has accumulated on top of a small glacier that has then flowed down the steep slope. The lateral ridges of the rock glacier merge up-slope with the lateral moraines of the glacier. This too indicates a glacier origin. In the middle ground there is a difference of about 70m between the lateral ridges and the centre-line of the rock glacier. This suggests that the glacier that once existed here has now moved down slope under its debris blanket to where we see it now (Whalley and Palmer, 1998). The rumpled or furrowed surface of the lower rock glacier has been produced by the piling up of the surface debris over the stagnating glacier ice core.

A note on the scientific debate relating to rock glaciers
The brief discussions usually given to rock glaciers in textbooks, even those on glacial and periglacial geomorphology, belie the number of papers written about them. Textbooks also tend to hide the discussions between proponents of the two main theories ('permafrost' or 'glacial') that take place in scientific papers. The rock glacier mechanism paradigm in Europe tends to be 'pro-permafrost'; in the USA and Canada 'pro-glacial'. Textbooks tend to give a balanced point of view but in reading scientific papers it needs to be borne in mind that a specific model is being used but without necessary acceptance of an alternative model.

« Plateau Glaciers and their significance       Cold climate conditions as a driver of alluvial fan deposition in the Lost River Range, Idaho, USA »