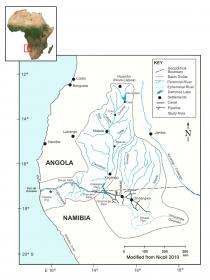 Hide
Figure 1. Map of the location map showing the watershed of the Cunene River in southern Africa, modified after Nicoll (2010). The drainage basin is subdivided into a perennial or regularly flowing stream (shown in white) and an ephemeral, internally-drained sub-basin that terminates at Etosha Pan. The location of Figure 2 is denoted with a star. Details 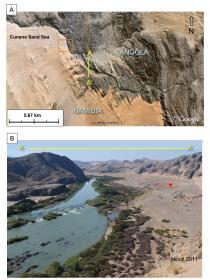 Hide
Figure 2. A. Annotated GoogleEarth™ image of the Cunene River, which forms the northern border of Namibia with Angola. Orange box is area depicted in Figure 4. The transect A—A’ depicts the line-of-view photographed in Figure 2B, which shows the Cunene River Valley in the reach of the Cafema Mountains. B. Photo taken from the left bank along the Namibia border, and looking upstream and to the SE. The red star denotes a Pleistocene river terrace mantled with gravels and stone tools that is depicted in Figure 3. Note the white truck in the right foreground for scale. Details 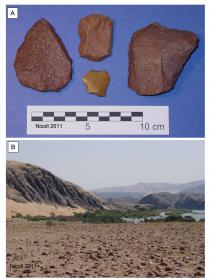 Hide
Figure 3. A. Lithic artifacts discovered on the alluvial terrace surface depicted in Figure 2B. B. View (in the foreground) of the Cunene River terrace surface, which is mantled with well-rounded gravels and cobbles, and cultural artifacts as depicted above in 2A. The 400 meter high Cafema Mountains are present in the background. Details 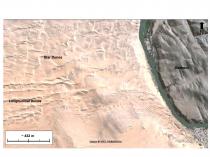 Hide
Figure 4. Dune morphologies present in the eastern side of the Cunene Sand Sea include star dunes and longitudinal dunes. Details 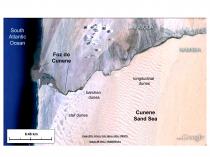 Hide
Figure 5. The Cunene Sand Sea, or erg, is a hyperarid desert plain with multiple dune forms located south of the Cunene River. The Foz do Cunene, is the delta that has formed where the Cunene River reaches base-level along the “Skeleton Coast” of the South Atlantic Ocean. Details

Introduction This vignette presents a virtual tour of the Cunene River, and a prehistoric archaeological site located on a fluvial terrace in northern Namibia. Today the Cunene River is an important transnational waterway and a critical reliable water source for the local nomadic Ovamba-Himba people who inhabit the Namib Desert. The Cunene is one of Namibia's largest perennial (regularly flowing) stream systems, and it flows through a landscape of stark contrasts. Its headwaters are located in the tropical rainforest of Africa, where its drainage morphology is dense and dendritic (Figure 1). Flowing downstream, the river incises through bedrock channels and flows through desert sands of the Cunene Sand Sea, as it flows towards its base-level along the foggy Skeleton Coast of the south Atlantic. Today, much of this region in southern Africa is a hyperarid desert, receiving less than 120 mm of rainfall per year. On the rare occasion of rainfall, this stark desert area can literally bloom into a grassland that attracts antelope and other game.

Rock Controls the River Course Along its 344 km course, the Cunene River cuts through some of Namibia's oldest rocks. The main rocks that form the 300-400 meter high mountains shown in Figure 2 are garnet-bearing mica schists and gneisses; these metamorphic rock outcrops are part of a geological trend called the Kaoko Belt, a mountain terrane and volcanic complex that was active during the Proterozoic, more than 1500 million years ago. Within the area depicted in Figure 2 near the settlement called Cafema, the Cunene River is a mixed bedrock-alluvial system (see Tooth and McCarthy, 2004). The valley morphology appears to be strongly controlled by the local bedrock lithology and structure, and flood events are influenced by tropical rainfall affecting the headwater regions in Angola. The river course exploits geologic structures (including joints, foliations, and fracture orientations) in the bedrock, which is dominantly the Okapuka Formation, a metasedimentary unit. Foliation and joint-set lineation features in these "tough" rock outcrops help direct the river flow. Where the granitic gneisses and anorthosites are not easily eroded, the river encounters rapids and waterfalls.

Prehistoric Terraces at Cafema After incising bedrock locally in the Cafema Mountains, the Cunene River valley widens dramatically for a few kilometers (see Figure 2). A 5 m high alluvial terrace along the left bank of the perennial river is mantled with a surface lag of cobbles and gravels (Figure 3), reflecting a time period when there was a greater fluvial discharge. Besides well-rounded gravels and cobbles, this terrace surface perserves a significant accumulation of Middle Stone Age artifacts. More than 30 stone tool or lithic artifacts were discovered in this open-air context (Nicoll, 2010). Among the finds were quartzite ﬂakes, cores, and characteristic stone tools with varying degrees of edge abrasion and varnish.

Important Archaeological Finds Some of the artifacts found on the surface of the Cunene River terrace near Cafema have been fashioned in a characteristic style known as Levallois–Mousterian points. These artifacts are the ﬁrst of their kind found in this region of Africa. This archaeological assemblage is especially significant because the cultural history of this region during prehistory is poorly known. Finding these tools enable correlations with other sites across the continent for which ages are known, and suggest that these kinds of artifacts are at least 200,000 years old. The artifacts found in river terraces at Cafema provide some chronostratigraphic context for the fluvial development, and elevates the importance of studying river corridors in reconstructing hominin behaviours during the Middle Pleistocene -- the time frame marked by the ﬁrst appearance and the dispersal of the modern human species Homo sapiens "out of Africa."

The Desert River becomes a Delta Through the Namib Desert to the west of the Cafema Mountains, the Cunene River flows through a vast hyperarid sand sea or erg (Figure 4), a wide plain with a variety of dune forms up to 400 m high. In the region south of the river, sands are piled up into many kinds of dunes, including longitudinal (long, linear dunes), barchans (crescent-shaped dunes) and star (star-shaped) dunes. The shape and orientation of the dunes are largely controlled by the direction and strength of the wind that blows the sand particles around. Where did all the sand come from? This is a good question – the sand may derived from erosion of rocks by the Cunene River over many tens of thousands of years. The river continues to flow westward to its local base-level of the South Atlantic Ocean, where it forms a delta, locally called the Foz do Cunene or "Cone of the Cunene" (Figure 5).

Geoarchaeological Significance As a perennial river that traverses the hyper-arid Namib plain in its lower reaches, the Cunene River is a vital water resource in a dryland. The waterway is an oasis, providing resource and refugia during periods of seasonal or persistent drought. During antiquity, rivers and other permanent or ephemeral water bodies may have determined effective migration routes for hominin dispersal in southern Africa. As such, further geomorphic study of this river corridor has tremendous potential to inform what we know about the environments in which our human ancestors lived. In this case study of the Cunene River, geoarchaeological studies integrated with geomorphology help inform what we know about fluvial dynamics and human prehistory in this remote region of southern Africa.

« Landscape or Land Use? Documenting Influences on Fine Sediment Yield in a Logged New England Watershed       Living on a slippery slope: Case studies of geologic hazards from the Wasatch Front, Utah »