Geomorphology and habitats at the mesoscale of river systems 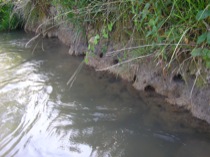 Hide
Figure 2: The 'mesoscale' in the context of the catchment and microhabitat systems: example from the River Tern, Shropshire, UK. Modified from Frissell et al. (1986). Details 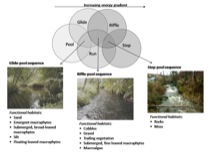 Hide
Figure 3: Relationships between physical biotopes and biologically functional habitat features at the mesoscale of river systems. Overlapping circles symbolise the overlap in physical characteristics between different biotope units, which form a spectrum rather than discrete units. Modified from Harvey et al. (2008). Details

Growing awareness of the deleterious impacts of human activities on river catchments, combined with high profile international environmental legislation (e.g. the EU Water Framework Directive; European Parliament and the Council of the European Union, 2000) has highlighted a need to assess the quality of river ecosystems and, as appropriate, protect high quality systems from degradation or 'rehabilitate' those which have already been degraded by human activities (Brookes, 1995). This requires a sound understanding of the interactions between the hydrogeomorphological and ecological components of the instream environment and hence the characterisation and assessment of river habitats represents an active research area in geomorphology and ecology. River rehabilitation is, however, still a relatively 'young' science, and success rates for rehabilitation projects remain low, often reflecting a failure to deliver measurable ecological improvements and create resilient, self-sustaining systems (Palmer et al., 2005). Such failures have occurred partly as a result of a tendency for practitioners to focus on engineering desirable channel and floodplain features, rather than restoring natural processes. The development of improved understanding of interactions between geomorphological and ecological processes across spatio-temporal scales is, therefore, vital to advancing the scientific basis underpinning river management and rehabilitation, and, hence, improving the success of management efforts.

A particular active research area is the emerging interdisciplinary field of 'ecohydraulics' which considers the abiotic factors which contribute to habitats (LeClerc, 2002). Ecohydraulics approaches have attracted some criticism associated with the simplicity of the assumption that 'geodiversity' equates to biodiversity, since other factors such as chemical water quality and biotic interactions have significant impacts on ecosystem structure and function. However, it is widely accepted that geomorphological processes play an important role in providing a template for aquatic habitat (Newson and Newson, 2000) and this is formally acknowledged by the EU Water Framework Directive's explicit focus on improving 'hydromorphology' as part of the route to achieving 'good ecological status' for European water bodies. Likewise, the impacts of aquatic organisms on geomorphological processes has been increasingly acknowledged: aquatic organisms and vegetation may act as 'geomorphic engineers' by modifying river flow and sediment characteristics (Statzner et al., 2000; Corenblit et al., 2007). Freshwater crayfish, for instance, have been shown to have significant impacts on river banks by creating extensive networks of burrows (Figure 1).

The 'mesoscale' of river systems is often the focus for habitat assessment and improvement efforts, and provides a link between microscale and catchment-scale processes (Frissell et al., 1986; Figure 2). The mesoscale has been defined as relating to variation across the active channel width and along channel lengths that are small multiples of channel width (Newson and Newson, 2000). At the mesoscale, a patchy mosaic of habitat units are identified which provide different functions for aquatic biota, including shelter and refugia, food sources and mating and oviposition sites (Harper et al., 1995). Such features are readily identifiable visually in the field and are therefore conducive to rapid reconnaissance methods for assessing habitat quality. Two different approaches to describing habitats at the mesoscale of river systems have developed simultaneously through geomorphological and ecological research. The geomorphological approach has been described as 'top-down' since it identifies 'physical biotopes'; distinct morpho-hydraulic features such as riffles, pools, runs and glides which are distinguished on the grounds of variation in 'physical' parameters such as flow velocity, water depth and substrate character (Wadeson, 1994). In contrast, the approach from ecology has been described as 'bottom-up' since it distinguishes organic and inorganic 'functional habitats' on the basis of the distinct assemblages of aquatic invertebrates that they support (Harper et al., 1992). Thus, the suite of habitats identified includes aquatic plants of different morphological type (e.g. emergent, floating and submerged macrophytes), as well as detrital habitats such as woody material and leaf litter, and inorganic habitat units based on different bed material characteristics (sand, silt, gravel). Research seeking to link these two initially divergent approaches has identified broad links between groups of physical biotopes and functional habitats, offering improved integrity to both concepts (Harper et al., 2000; Harvey et al., 2008; Figure 3).

Despite these developments, a series of methodological and practical issues associated with the assessment and characterisation of mesoscale physical habitats at the mesoscale persist. For instance, variations in flow stage and seasonal changes in aquatic vegetation cover influence channel roughness and hence flow hydraulics (Clifford et al., 2006; Harvey and Clifford, 2008), and habitat character and quality is influenced by catchment factors such as climate and geology, presenting challenges for cross-catchment comparisons. Furthermore, studies seeking to identify 'benchmark' habitat quality conditions are hampered by a lack of high quality or 'pristine' reference reaches and uncertainties associated with impacts of, and recovery from, previous anthropogenic influences and management interventions (Harvey and Wallerstein, 2009).

A key future challenge in this area is achieving an improved process understanding of the ways in which physical channel structure impacts upon aquatic biota (from the individual to the community) across various spatial and temporal scales. Such work is particularly important within the context of an ever stronger focus on numerical modelling in river science and rehabilitation practice (Clifford et al., 2008). This necessitates an enhanced understanding of interactions between channel geomorphology, hydraulics and ecology in order to improve model representation of the various elements of the instream environment. Particularly difficult to parameterise, but of potential significance for habitat, are microscale hydraulic characteristics such as turbulent properties and local sediment transport processes. Preliminary research has demonstrated differences in turbulence intensity and flow structures between biotopes, and variations in both spatio-temporal complexity of hydraulics and the dominant sediment mixing processes operating within different habitat units (Harvey and Clifford, 2008; 2009). Such microscale habitat characteristics may have implications for aquatic communities through, for instance, the provision of refugia from disturbances (e.g. flood events or extreme low flows) and the transfer of sediments, nutrients and pollutants at patch scales within river systems.