Figure 1: Location of the Taihu Basin in east China Details 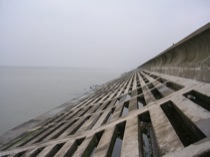 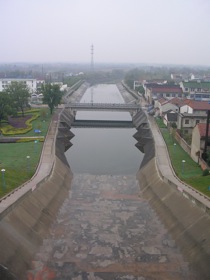 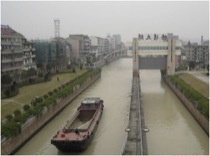 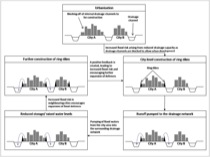 The past decade has seen a significant transition in the management of fluvial and coastal flood risks from flood 'defence' (employing 'hard engineering' measures such as flood embankments, pumping stations, canalisation), towards more holistic 'flood risk management' which places greater emphasis on sustainability and social responsibility (Alphen et al., 2006). The adoption of risk-based approaches acknowledges the need to address both the probability of flood events (and hence the 'physical' causes of flooding) and the consequences of flooding for people and assets in the floodplain (Sayers et al., 2002). Thus, while floods are a natural component of the hydrological system, it is flood risk that is a human concern as a result of the multiple serious consequences of flooding for human populations (Samuels, 2006). Future changes in flood risk are anticipated at the global scale as a result of both changing frequency and magnitude of precipitation events associated with global climatic changes, and socio-economic developments which may place larger proportions of people and property at risk.

In order for Governments and other stakeholders to respond effectively to the challenges of managing future flood risks, a sound scientific understanding of the interactions between the different physical and socio-economic factors contributing to flood risk is required. An urgent need for a broad-scale assessment of current and potential future flood risks in the Taihu Basin, east China was identified and a China-UK Scientific Co-operation project was initiated by the UK Office of Science and Innovation and the Ministry of Science and Technology in China to meet this need. The project represents an application of the UK Foresight Future Flooding framework (Evans et al., 2004a; 2004b; Thorne et al., 2007); exploring how flood risk may change in the Taihu region over the next 50 years as a result of response to climatic and socio-economic change, and identifying the options for the government and stakeholders in responding to the changing nature and extent of that risk (see Harvey et al., 2008; 2009).

The Taihu (Tai Lake) Basin drains a catchment of over 36,000 km2 within the delta region of the Yangzte River in East China (Figure 1). The basin is one of the most important and rapidly developing urban and economic regions in China, encompassing the administrative provinces of Shanghai, Zhejiang and Jiangsu. While the region represents only 0.4% of the land area of the country, it supports 3% of the population (36.8 million people) and accounts for 13% of the nation's GDP. The area faces significant risks from flooding arising from a combination of physical and socio-economic factors (or 'drivers'), all of which are expected to increase in significance with future climatic and socio-economic change (Harvey et al., 2009). Furthermore, the Taihu Basin is an extensively modified and heavily managed catchment, characterised by a complex network of drainage channels, dikes, flood gates and pumping stations (see Figures 2, 3 and 4) which can also impact on flood risk.

Climatic drivers of flood risk in the Taihu Basin include precipitation, marine storm surges, relative sea-level rise, and waves. The Basin is characterised by a monsoonal climate, and a large proportion of annual rainfall is associated with long duration, broad-scale rainfall events in the summer months ('plum rains'). Pluvial (rainfall) flood risks associated with the plum rains are further exacerbated by the extremely low-lying topography of the region (the total elevation range is 4 m; Lin, 2002) and are expected to have increased impact as a result of projected future changes in temperature and precipitation patterns. In the area around Shanghai, typhoon-induced storm surges and localised high-intensity storms associated with urban heat island effects (Djen, 1992; Zong and Chen, 1999) also contribute to flood risk. The Yangtze delta and the eastern lowlands of the basin are also exposed to flooding associated with future sea level rise and fluvial (river) flooding which will have implications for the effectiveness of existing flood defence infrastructure.

Socio-economic drivers of flood risk in the Taihu Basin include economic development, urbanisation, land subsidence, land use and construction on the flood plain and along the coast. Urbanisation and land use change in the Taihu Basin is increasing the proportion of impermeable surface in the basin and reducing the capacity of the drainage system to store and transfer floodwaters. Sedimentation associated with deforestation has also impacted various parts of the catchment and may be of particular significance in the many heavily modified drainage channels (e.g. Figure 3) where there is no capacity for morphological adjustment to maintain channel capacity (Lane et al., 2007). Surface waters in the Basin have suffered pollution from various industrial, urban and agricultural sources (Xue et al., 2007), putting pressure on other sources for water supply, particularly groundwater. Over-pumping of aquifers in the Taihu Basin has led to land subsidence of over 1 m (1/4 of the total elevation range) in some areas (Zhang et al., 2007), with significant implications for flood risk. People, properties and assets within the flood plain also act as a driver of flood risk, through damage and losses associated with flooding of both residential and non-residential properties as well as social impacts including disruption, stress and damage to personal property and human health (Junfeng et al., 2003; Green and Penning-Rowsell, 2007).

Flood risk drivers associated with the flood control system include operational procedures and the construction of new structural defences such as moveable barriers, embankments, dikes and polders. Operation of the various reservoir systems in the Taihu Basin system must balance the potentially conflicting goals for alleviating water supply pressures and improving flood storage. Various levels of administrative control within the Basin also result in conflicts in water resource management and social justice issues arising from the transfer of flood risk from one area to another. For instance, Figure 5 illustrates how construction of ring dikes around one city, in an attempt to protect against flooding, may encourage neighbouring cities to build their own defences and pumping stations, resulting a positive feedback loop and increasing pressure on the drainage network. Thus, flood defence actions, taken without consideration of the whole flooding system may, in fact, act to increase flood risk.

The Taihu Basin region faces significant flood risks which are expected to increase over the next 50 years. The options for managing these future flood risks must balance effectiveness in reducing flood risk against cost-effectiveness, social justice and environmental sustainability criteria. Due to the high level of risk faced by the basin, future flood risk management will necessarily incorporate a significant number of 'hard engineering' measures as part of the portfolio of management responses, together with non-engineering responses such as flood proofing and emergency management.