Hydrogeomorphic and ecological responses to the 1980 eruption of Mount St. Helens, Washington 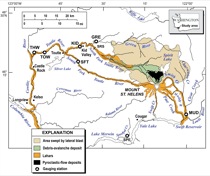 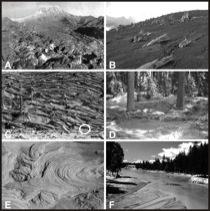 Hide
Figure 3. Schematic depiction of water movement through the landscape before and after the 1980 eruption. Width of arrows depicts relative magnitude of water transfer. In the posteruption diagram, note the loss of canopy interception, the greater amount of precipitation reaching the ground surface, reduced evapotranspiration, the reduction of surface infiltration, and more prominent overland flow. Also note the hypothesized changes in subsurface water transfer (from Major and Mark, 2006). Details 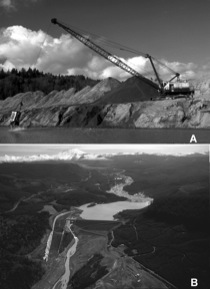 The 1980 eruption of Mount St. Helens, Washington, caused landscape disturbance on a grand scale, and the hydrogeomorphic (hydrologic and geomorphic) and ecological responses have been not only of scientific interest but have also had significant societal impacts. Intensive studies of the eruption itself, and ongoing data collection and analyses of posteruption hydrology, sediment transport, geomorphic change, and ecological response provide an unparalleled template for understanding what influences and controls landscape response and resilience to natural disturbance. On 18 May 1980, an ensemble of volcanic processes abruptly altered landscape hydrology and geomorphology, and created distinctive disturbance zones (Figure 1) having varying impacts on regional biota. These processes included a voluminous debris avalanche (large landslide), a laterally directed volcanic blast that developed into a devastating, widespread pyroclastic density current (PDC) (a hot, sediment-charged, gravity-driven current of gas and volcanic rock), lahars (volcanic debris flows), widespread tephra fall (fallout of volcanic fragments and ash ejected into the atmosphere), and relatively small-scale (compared to the blast PDC) pyroclastic flows (hot, dense flows of gas and volcanic rock) generated by partial collapse of a vertical eruption column. The nature and severity of impact in a particular watershed depended upon the disturbance process involved and proximity to the volcano. Multiple processes affected both hillslopes and channels in some basins, whereas single processes affected either hillslopes or channels in others.

The 1980 eruption
The eruption began with a colossal debris avalanche off the volcano's north flank (Voight, 1981). Release of the debris avalanche triggered a laterally directed blast and consequent large-scale PDC that devastated ~550 km2 (~90,000 football fields in area) of rugged, forested landscape in a roughly 180 degree arc north of the volcano. Within minutes to hours of the onset of eruption, extensive lahars swept all major channels draining the volcano (Major et al., 2005). The debris avalanche deposited 2.5 km3 of rock, soil, ice, and organic debris (enough to fill ~1 million Olympic-sized swimming pools) in the upper North Fork Toutle River valley (Figures 1, 2; Glicken 1996), buried 60 km2 (~10,000 football fields in area) of the valley to a mean depth of 45 m (~1/4 the height of the Washington Monument), and disrupted the watershed's drainage pattern. The blast PDC chiefly toppled surrounding forest and blanketed the terrain with up to 1 m of gravel-to silt-sized tephra (Figures 1, 2; Hoblitt et al., 1981; Waitt, 1981), but close to the volcano it (and the debris avalanche) stripped vegetation and soil from the landscape. In the Green River, Smith Creek, and Clearwater Creek basins (Figure 1), the PDC ravaged hillslopes but had relatively little impact on stream channels. Large lahars swept the channels of Smith Creek and the Toutle, North Fork Toutle, South Fork Toutle, and Muddy Rivers (Figure 1). Overall, they reamed river corridors, deposited tens to hundreds of centimeters of gravelly sand on valley floors and floodplains, and straightened and smoothed the river channels (Figure 2). Tephra fall from a billowing eruption column, which developed shortly after the onset of the eruption, blanketed areas east-northeast of the volcano with gravelly pumice fall as thick as tens of centimeters and capped with silt (Waitt and Dzurisin, 1981). Close to the volcano, tephra fall was one of many disturbances to the landscape, but beyond 15 km east of the volcano, it was the primary disturbance in many watersheds (Figure 2).

Hydrogeomorphic impacts of the eruption
The Mount St. Helens eruption caused physical and ecological disturbances that radically altered landscape hydrology. The eruption destroyed mature forest over hundreds of square kilometers, broadly deposited tephra having a nearly impervious, silt-capped surface over more than 1000 km2, and greatly altered the character of major channels that drained the volcano. The volcanic impacts temporarily modified the typical modes by which water moves through the landscape in the most heavily affected basins (Figure 3; Major and Mark, 2006). Normally, infiltration and subsurface flow are the dominant components of forest hydrology in the western Cascade Range of Oregon and Washington, but those components radically changed in some basins. Vegetation loss and greatly reduced surface infiltration altered the amount of precipitation reaching and soaking into the land surface as well as the amount of moisture evaporating and transpiring back to the atmosphere. These changes temporarily directed more rainfall and snowmelt to overland flow, allowed greater quantities of water to reach channels more quickly, and resulted in posteruption flood discharges that were larger than preeruption discharges for a given amount of precipitation input (Major and Mark, 2006).

Hydrogeomorphic response to the eruption and its societal impacts
The varied nature of the volcanic impacts led to varied hydrogeomorphic responses. Enhanced runoff and larger discharge flood flows in conjunction with the extraordinary and easily mobilized sediment supply introduced to the volcanically impacted basins led to extraordinary erosion and sediment transport (Figure 4; Major et al., 2000; Major 2004). Within several years overland flow diminished and flood discharges lessened as a nearly impervious fine-grained tephra surface got churned by physical and biological processes, vegetation re-established, and grain sizes on channel beds coarsened; however, enhanced sediment transport persists in some basins (Figure 4). As of 2009, nearly 30 years after the eruption, 350 million metric tons of suspended sediment have been delivered from the Toutle River watershed to the Cowlitz River, enough to fill ~13.5 million construction dump trucks. Such prodigious sediment loading of channels has wreaked considerable socioeconomic havoc by reducing their ability convey flood flows without spilling onto floodplains or nearing the tops of protective dikes. Significant and ongoing engineering efforts have been required to mitigate these problems (Figure 5). In 1988, the U.S. Army Corps of Engineers completed a large sediment retention structure (SRS) to prevent sediment from reaching downstream channel reaches. As of 2007, about 225 million metric tons of sediment had accumulated behind the SRS (U.S. Army Corps of Engineers, written communication, 2007). However, some sediment now bypasses the SRS and in 2007 the Corps had to resume channel dredging downstream. Between 1980 and 1990, the federal government spent more than US$1 billion mitigating problems caused by the 1980 lahars, the debris avalanche, and posteruption sediment redistribution.

The influence of survivors on ecological response to the eruption
Ecological response to the eruption can be viewed in terms of a framework of survivor legacies. The eruption created distinctive disturbance zones that differed in the types and magnitudes of impacts on terrestrial and aquatic ecosystems (Crisafulli et al., 2005; Swanson and Major, 2005). Despite appearances to the contrary, a surprising number of species survived the eruption, even in heavily devastated areas. Various factors affected species survival, including disturbance characteristics (Swanson and Major, 2005), species characteristics, and chance (Crisafulli et al., 2005). Species characteristics that provided ways for organisms to avoid the brunt of the eruption, such as by being absent from the area or in protected habitats (e.g., beneath the ground or in lakes protected by ice and snow) were important to survival. Small organisms fared better than did large organisms because they were more likely to have been in protected areas (Crisafulli et al., 2005). The chance timing of the eruption, early morning in springtime, also influenced species survival. Many nocturnal animals had returned to their underground retreats, significant snowpack covered terrestrial and aquatic habitats, seasonally transient visiting species had not yet returned to the area, and bud break had not yet occurred in many high-elevation areas (Crisafulli et al., 2005).

The variations in surviving organisms and other biotic legacies combined with continuing geomorphic changes to some environments have largely guided the nature and pace of ecosystem response (Dale et al., 2005; Crisafulli et al., 2005; Swanson and Major, 2005). With time, survivor "hotspots" have coalesced into larger patches, and have served as stepping stones for immigrant colonization (Crisafulli et al., 2005). The importance of biological legacies will diminish with time, but the intertwined trajectories of geomorphic and biological successions will influence the geological and biological responses to the 1980 eruption for decades to come.