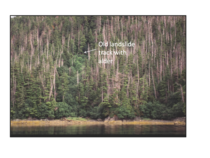 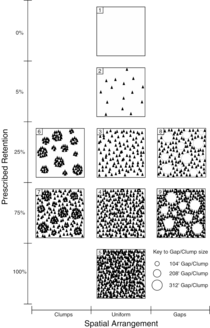 Hide
Fig. 2. Harvest pattern including 100, 75, 25, and 0% retention. Soil hydrology was not monitored in clumps or gaps. Details 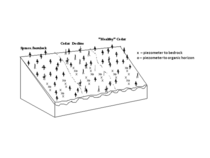 Fig. 3. An example of well location along a hillside. Details 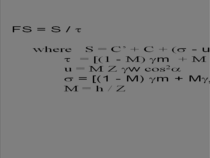 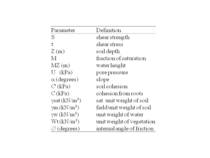 Death of trees by either forest harvest or by natural forest decline may result in increases in soil saturation, flooding, and landslides. These geomorphic processes, potentially differing in frequency and magnitude for natural and harvested forests, may also differ spatially and temporally by forest type. Both naturally declining forests and healthy forests have steeper portions prone to landsliding (Fig. 1). Yellow-cedar (Chamaecyparis nootkatensis) decline, a slow death of trees associated with changes in soil temperature and/or soil saturation, occurs in conjunction with climate warming. In the Tongass National Forest of southeast Alaska, cedar decline occurs in about 200,000 ha of forest at elevations < 300 m primarily near bogs. In southwest British Columbia, cedar decline encompasses 47,000 ha at elevations close to 1000 m. Timber harvest, currently averaging 76 millions of board feet per year, is expected to cover a total of approximately 274,377 ha or approximately 10% of the Tongass National Forest in the next 100 years. Studies in the Pacific Northwest and Alaska detect a two- to ten-fold increase in landsliding following timber harvest as compared to a 3.8-fold increase in the frequency of landslides in areas with cedar decline. Tree death, either by forest harvest or by cedar decline, results in loss of soil cohesion from decreased root strength. Reduced shear strength, associated with increased saturation, results from decreased tree canopy interception and reduced transpiration. Here, site saturation and characteristics of landslide initiation, runout, and deposition are summarized for areas of forest harvest and yellow cedar decline in the Tongass National Forest.

To determine associations between forest conditions and site saturation (water height/soil depth), wells and piezometers were installed in hollows of hillsides with various harvest intensities (Fig. 2) and within hollows of hillsides with and without cedar decline (Fig. 3). Sites were helicopter logged to reduce possible soil disturbance. Hollows, convergent areas on hillslopes that collect colluvium, woody debris, and water, are considered primary source areas for landslides. Relative influences on slope stability by changes in soil moisture and root strength were evaluated with the infinite slope stability model, appropriate for wide and shallow landslides of the area. The model estimates the factor of safety (FS) where theoretically, a critically stable slope would have a FS = 1 and a FS < 1 would be unstable (Fig. 4, 5 define equation and parameters used). Measurements made during several rainy seasons indicate that complete saturation of forest soils in steep regions of SE Alaska is common. Observations of peak water table heights in 56 ground-water monitoring wells showed that soil saturation levels on hillslopes differed significantly with all harvest intensities at only one of two study locations following 25%, 75%, and 100% harvest. Before the forest was cut 100%, the average rainfall needed for 50% saturation of the soil was 54 mm, but after clearcutting soils reached an equivalent saturation with 61% less rainfall (21 mm). Statistically significant changes in ground saturation associated with forest harvest were found only on study locations high on valley hillsides as opposed to those located at the base of hillslopes. At steep (> 30°) cedar decline and surrounding healthy forest sites, 120 piezometers indicated no statistical difference in maximum saturation, but the timing was different. Sites in decline had smaller hydrologic contributing areas and remained saturated longer than surrounding healthy forests. At most sites, soil depth was < 0.7 m, and the loss of root strength was estimated to have a greater influence on slope stability than observed changes in site saturation. In soils deeper than 1 m, changes in soil saturation have a proportionally larger influence on slope stability.

To characterize initiation and runout characteristics of landslides, a random sample of 300 landslides was assessed in old-growth, second-growth, and in clearcuts on Prince of Wales Island. Slides initiated on slopes ranging from 28° to 54° with a mean slope of 36°. Over 50% of the landslides initiated on slopes < 33°. Blowdown and snags, associated with cedar decline and "normal" rates of mortality, were found adjacent to at least 75% of all failures regardless of land use. Natural death and forest decline clearly influence site stability in areas of forest harvest. Nearly 50% of the landslides within clearcuts occurred within one year following timber harvest; more than 70% of these sites had hydrophytic vegetation (wetland plants) directly above failures. In following the runout paths of failures, significantly more erosion per unit area occurred within clearcuts than in old-growth forests on slopes with gradients from 9° to 28°. Runout length, controlled by hillslope position within deglaciated U-shaped valleys, was typically longer in old-growth forests than in second growth and clearcuts (median values were 334, 201, and 153 m, respectively). Old-growth sites were often upslope of second-growth and clear cut sites due to ease of access, making some comparisons of landslides in different forest types irrelevant. Most landslides and debris flows deposited in first-and second-order channels (often used by resident fish populations) before reaching the main stem channels used by anadromous fish (typically, river-spawning salmon). Slide deposits in old-growth were estimated to contain five times more woody debris than slides occurring in clearcuts.

In summary, although initiation site conditions for landslides are similar for harvested and naturally declining forests, the timing and consequences of landslides in these areas are different. A balance of sediment and large wood provide structure to streams, integral for creation of fish habitat. Large wood is useful in retaining sediment and creating pool habitat. Because the composition of landslides in harvested sites has a much lower proportion of large woody debris, the habitat created is likely of inferior quality.