Continent: Scales geometrically and dynamically to any location in the world
Country: All
State/Province: All
City/Town: All
UTM coordinates and datum: none 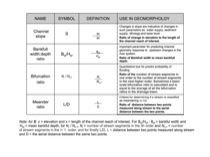 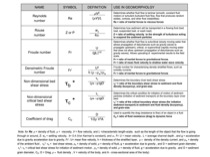 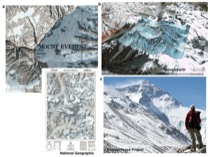 Hide
Figure 1. Geometrically similar representations of Mt. Everest: a) A topographic map, b) a satellite image overlain on top of a DEM (digital elevation map), and c) a photo of the actual mountain. Details 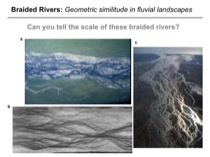 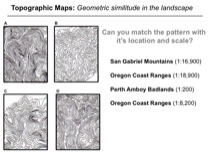 One can express physical quantities in terms of many different units of measure and a particular quantity can take on very different numerical values under different unit systems. For example, length can be measured using metric units (e.g. millimeters, meters, or kilometers), English units (e.g. inches, feet, yards, or miles), nautical units (e.g. cables, nautical miles, or leagues), astronomical units (e.g. parsecs, light years, or astronomical units), or any of numerous other systems of measurement. Yet, the underlying physics is independent of the choice of units. There is something much more fundamental than the units used to measure a physical quantity. That something is the physical dimension of the quantity measured.

Physical dimension refers to both a basic measurable property of something (a quantity) and the power (dimension) to which that quantity is raised. In order to characterize almost any physical geomorphic property or process, all you need are the three fundamental physical dimensions of mass (M), length (L), and time (T). All geometrical properties which describe landscape morphology, involving length (L), area (L2), and volume (L3), can be characterized using length dimensions. All kinematic properties, properties that describe the motion of objects and therefore involving velocities (LT-1), accelerations (LT-2), and frequencies (T-1), can be characterized using the dimensions of time and length. All dynamic properties, properties that describe the relationship between the motion of bodies and the forces that drive motion and therefore involving forces (MLT-2), momentum (MLT-1), and energy (ML2T-2), can be characterized with some product relating mass to length and time.

One can also combine these dimensional elements in different ways in order to create simple dimensionless ratios (Table 1), such as a topographic map scale (ratio of distance on a map to distance on the surface of the Earth) or more complicated dimensionless expressions, such as the non-dimensional ratio of inertial to gravity forces of a fluid, referred to as the Froude number, Fr (Table 2). These 'dimensionless numbers' are useful tools for geometrically scaling one system to another (geometric similitude). For example the 'shape' of Mt. Everest on a topographic map is the same as Mt. Everest itself, only at a much smaller scale (Figures 1a, b, and c). Dimensionless numbers are also useful for scaling geomorphic systems in terms of the dynamic processes that take place within them (dynamic similitude). For example for a computer simulation of river dune migration to scale to dune migration in a field setting, requires that both systems have the same values for the non-dimensional numbers that characterize fluid flow, the Froude, Reynolds, and Rouse numbers (Table 2).

Non-dimensional numbers are not only useful scaling parameters, they are also useful tools for building insight into the fundamental properties of a system. Dimensional analysis helps us reduce a problem to the fundamental relationships among the variables that characterize the phenomena of interest. For example, derivation of the Rouse number teaches us that the balance between the force of gravity and the intensity of turbulence largely controls whether a given sediment grain size will be transported as suspended load or not in flowing water. Dimensional analysis helps us develop hypotheses about complex processes that can be tested by experiment or field observation.

Numerous methods exist for deriving useful dimensionless numbers. Some of these methods are fairly simple and rather intuitive, such as creating simple non-dimensional ratios by dividing a dimensional property by a property with the same dimensions. Examples of some simple non-dimensional ratios that you are likely familiar with include Pi (the ratio of a circle's circumference to its diameter), atomic weight, Ar, (the ratio of the average atomic mass of an element to 1/12 of the mass of an atom of 12C), and the decibel, dB, (the magnitude of a physical quantity relative to some reference level). Other, more complicated and mathematically formal (although not necessarily difficult) methods can also be used in order to derive non-dimensional numbers. One of the more popular methods for reducing a problem into a relatively simple non-dimensional expression is called the Buckingham Pi method.

The Buckingham Pi method is a common method for calculating non-dimensional numbers that characterize complex processes. The Buckingham Pi theorem states that the number of dimensionless numbers needed to correlate the variables in a given process is equal to n - m, where n is the number of variables (e.g. velocity, gravitational force, area) and m is the number of fundamental dimensions (such as length, time, or mass) used. For example, suppose that we would like to know the fall velocity, V, of the hammer dropped by the Apollo 15 astronaut David Scott while standing on the surface of the moon. Because the moon's atmosphere is extremely thin, free fall on the surface of the moon is well approximated by free fall in a vacuum (no drag force). Therefore, the velocity of the hammer, V, (LT-1) is simply a function of acceleration due to the force of gravity on the moon, a, (LT-2) and the distance that the hammer fell, h (L). There are n = 3 variables (V, a, and h) and m = two fundamental dimensions, (length, L, and time, T). Because n - m =1, we will need only one dimensionless number to characterize the problem. Given V = Const * f (a,h) then V aabh c = Const = the dimensionless number Pi.

Because Pi is a non-dimensional number, it follows that:

From empirical measurements we know that the force of gravity on the moon, a, is equal to 1.6 m s-2 and that Pi = 21/2. What was the velocity of the hammer at impact with the moon's surface, if the distance above the surface of the moon that Scott dropped the hammer was ~ 1 m?

What was the velocity of the feather that Scott dropped at the same time as he dropped the hammer while standing on the surface of the moon? Are these two scenarios geometrically and dynamically similar? How could you use dimensional analysis to demonstrate geometric and dynamic similitude?

For a movie of David Scott's hammer and feather experiment during the Apollo 15 moon landing:
For further reading on applications of dimensional analysis in geomorphology: