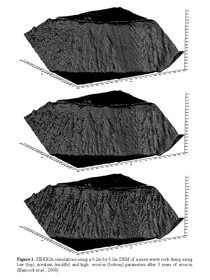 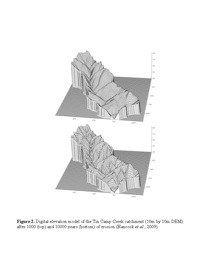 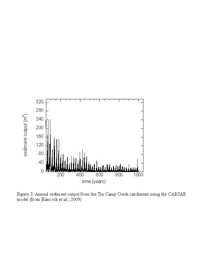 The ability to measure and model soil erosion and resultant landscape evolution is important because soil erosion has a range of environmental impacts, including loss of organic matter and nutrients, reduction of landscape productivity and a reduction in downstream water quality. It is also necessary to understand how hillslope and catchment shape evolves through time (Figures 1 and 2) (Hancock et al., 2002). Soil erosion and landscape evolution models are also especially pertinent for landform design and the rehabilitation of mine sites as it is important for engineers to establish how resilient a proposed rehabilitated landform sculpted over the existing mine landform will be (Figure 1).

More recently, computer landscape evolution and soil erosion models that use digital elevation models to represent the landscape surface have been developed (Willgoose et al., 1991a,b; Braun and Sambridge, 1997; Tucker et al., 2001) with some models being applied to assessment of degraded and mining landscapes (Willgoose and Riley, 1998; Coulthard and Macklin, 2003). These models have considerable advantages over traditional modelling approaches, such as the RUSLE and WEPP, as they remove the need to manually determine slope length and angle. These models can also determine both erosion and deposition, something not possible with the RUSLE. A further advantage of using digital elevation based models is that they dynamically adjust the landscape to erosion and deposition, producing a better representation of slope and angle over the duration of the simulation.

These models all require some form of data input or calibration. For example, before the SIBERIA model can be employed the fluvial sediment transport equation and area-discharge relationship require calibration. The fluvial sediment transport equation is most reliably parameterised using input from field sediment transport and hydrology data (Evans et al., 1999, 2000; Hancock et al., 2000). While there are many factors, such as organic matter content, electrical conductivity, mineralogy and rock content that contribute to soil erodibility, one of the strongest influences on erodibility is soil particle size distribution. Where there was an absence of field data soil textural information such as that of Sheridan et al., (2000) provide a database. Calibration of the CAESAR model is considerable simpler than other models and requires a DEM of the study site or catchment, rainfall data (mm hr-1) and soil/sediment particle distribution data which can be input as 9 individual ranges.

In terms of ease of application all models have their strengths and weaknesses. The calibration of SIBERIA can be time consuming if using field hydrology and sediment transport data to derive model parameters in advance of using the model. The calibration of CAESAR is much simpler with only hourly rainfall data and soil particle size data required as input parameters. The difficulty with this is the point specific nature of the soil particle size data that can be used and the availability of hourly rainfall data. Soil particle size data varies considerably on the hillslope and catchment scale (both laterally and with depth) and we have demonstrated here that it can affect sediment transport rates. Therefore, it may be wise to evaluate the impacts of having areas with different grain size characteristics on the model performance. Long-term hourly rainfall data may not be available for study catchments especially in remote locations.

The SIBERIA model, when calibrated for use with average annual data is considerably quicker in terms of run time. For example, simulating a catchment with 5000 nodes takes approximately 1 hour per 1000 years for SIBERIA (Figure 2) while CAESAR takes approximately 100 hours for 1000 years (Figure 3) (with both models run using a computer with an AMD 2.4GHz processor with 2GB RAM). The reason for the time difference is that SIBERIA uses average annual hydrology and sediment transport data while CAESAR uses hourly rainfall data and has a more sophisticated representation of hydraulics and sediment transport which requires considerably more calculations. CAESAR also calculates the erosion and deposition of each soil size fraction. Consequently if average annual erosion rates are required then SIBERIA can provide the required output while if sediment transport rates down to the scale of individual storm events is required then CAESAR can provide this data on an hourly output.

« A high resolution record of soil erosion from pre-agricultural times to the present: transport- and supply-limitation of erosion       The Cocos (Keeling) Islands, and what coral reefs can tell us about changes of sea level »