A high resolution record of soil erosion from pre-agricultural times to the present: transport- and supply-limitation of erosion 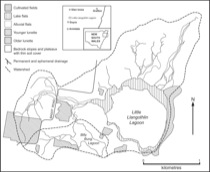 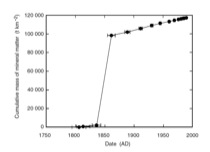 One of the major drawbacks of most records of soil erosion (and particularly of records of the impact of agriculture on soil loss) is their limited time span. This makes it difficult to judge the long-term effects of land use practices and to evaluate the impacts of secular environmental variation on soil loss. It makes it hard to establish the antecedents of modern problems, to calculate trends and rates of change, and to establish the lag times between catchment modification and erosional response. Short-term measurements also tend to miss the impact of rare, high-magnitude events such as major floods and droughts or, if they are fortunate enough to monitor such events, are not able to place their impact in the context of the long timescale.

A high-resolution record of soil erosion from the New England Tablelands of eastern Australia may provide us with the information to allow us to tackle these problems. The record extends from pre-agricultural times and covers the entire span of agricultural impact on the environment. It exploits the sedimentary archive of erosion trapped in the closed lake basin of Little Llangothlin Lagoon (Fig. 1) and dated using 210Pb methods.

Little Llangothlin Lagoon covers an area of 1.17 km2, with a catchment of 3.23 km2. The small size of the catchment and the short hillslopes leading to the lake minimise the potential for sediment storage on the catchment slopes and mean that sedimentation in the lake is likely to take place relatively rapidly after the occurrence of erosion on the catchment. The sedimentary record therefore probably represents a near-complete and near-instantaneous response to events in the catchment area. Rates of wind erosion and deposition in the area are negligible and this has probably been the case since the time of European settlement. The depositional record in the lake is thus likely to reflect water-borne sediment transport.

Variations in the mass of mineral matter deposited in the lake basin between c. 1806 and 1990 are shown in Fig. 2. This reveals three distinct episodes of sedimentation:

Sedimentation rates thus increased by a factor of 50 within a year or two of European settlement in the catchment, with almost 85% of post-contact sedimentation taking place in the first quarter of a century of European land use. In the second half of the nineteenth century, however, the lake experienced a sharp drop in sedimentation. The resultant sedimentation rates are of the same magnitude as those that prevailed prior to the arrival of Europeans at the site. They are also remarkably constant over time, being maintained at low and stable levels right up to the present day.

The change to low and constant sedimentation rates is not a product of stable environmental conditions. It is not a result of a decline in the intensity of land use after c. 1861, nor a consequence of the introduction of soil conservation measures during the second half of the nineteenth century. Instead, the disturbances associated with European contact may have depleted the catchment of transportable material with the result that subsequent erosion has been controlled, not by the processes of erosion and transport, but by the rate at which erodible material is being produced on the catchment slopes by weathering and/or pedogenesis. Sedimentation in the lake may thus have moved from a transport-controlled regime, in which the amount of material eroded from the catchment surface depended on the activity of erosional and transporting mechanisms, to one in which sedimentation was limited by the rate at which catchment material was made available for transport into the lake.

Alternatively, compaction of the ground surface by hard-hooved stock, the digging of drainage channels and the clearance of vegetation during the initial phase of European contact may have increased overland flow and encouraged gully development. Rapid extension and deepening of the drainage net may have generated high rates of erosion. Within a short period, however, the drainage net would have established a new equilibrium in which the gullies transported only that material eroded from their beds and walls. As a result, erosion would have declined to a low and relatively constant level.

Much of the evidence available to test these competing hypotheses is equivocal. Nevertheless, the gullying model must be rejected: first because there is no evidence of past or present dissection of the catchment surface, secondly because gullying would seem incapable of providing the highly constant rate of sedimentation that has prevailed in the basin over the past century or more and thirdly because the gullying model cannot explain the step change from high to low rates of sedimentation in the basin. Further support for the supply-limitation hypothesis comes from the concordance between likely rates of soil formation in the catchment and rates of sedimentation in the lagoon.

The decline to low rates of erosion was thus not the result of the adoption of conservation measures, and it occurred despite massive changes in land use practice, changes in population density and climatic shifts. Similarly, high-magnitude natural events such as floods and droughts appear to have had little effect on erosion rates. Instead, the disturbance to the equilibrium of the natural system consequent upon the arrival of Europeans in the catchment seems to have made available sediment stores that were moved by the first large events to affect the catchment. Once these stores were depleted, event magnitude and land use appear to have become unimportant, with only a finite supply of material available to be moved by all events above a certain size. Thus, erosion rates seem to have been governed largely by the availability or not of stores of regolith in the catchment.

These results may have significant implications for soil conservation practice. First, conventional short-term monitoring of soil erosion is unlikely to allow investigators to recognise that low rates of soil loss at sites such as these are a consequence of the past depletion of sediment supplies. Instead, such results are likely to be interpreted as a product of relatively low levels of agricultural disturbance and/or good management practice. Such findings might lead researchers to conclude that similar land use practices may be introduced elsewhere with little impact on the land. Secondly, attempts to reduce rates of soil loss by changes in land-use practice or by the use of engineering methods such as contour banking and grassed waterways are likely to have minimal effect in such systems. This is because such measures attempt to reduce the capacity of transporting and erosive processes when these are already undersupplied with material. This could result in considerable expenditure for little or no minimisation of soil loss.