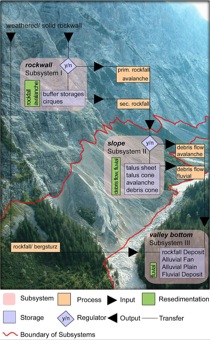 Hide
The sediment cascade of the Reintal valley showing the three mentioned subsystems. Each subsystem is characterised by specific sediment storage types more or less connected to each other through sediment transfer processes (modified from Schrott et al. 2003; Photograph by David Morche). Details 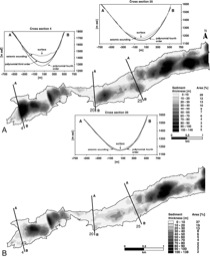 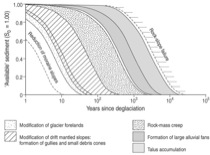 Hide
Fig. 4: Hypothetical curves for different landsystems describing the state of paraglacial landscape adjustment at any time after deglaciation. The period of paraglacial activity varies over several orders of magnitude ranging from 10-100 years for the modification of glacier forefields to more than 10000 years for rock-slope failure. This study refers to paraglacial talus accumulation also operating over more than 10000 years after deglaciation (Ballantyne 2002). Details

This vignette deals with the quantification of sediment storage and sediment input and exemplifies how sediment is transferred through an alpine catchment system (Reintal, Bavarian Alps). The Reintal valley is located in the Bavarian Alps (see fig. 1), surrounded by some of the highest summits of Germany (e.g. Zugspitze, 2960 m a.s.l.) and drained by the river Partnach. The study area covers approx. 17 km2 in the central part of the catchment within an altitudinal range from 1050 to above 2700 m a.s.l. The basin represents a through-shaped morphology due to Pleistocene glacial erosion with steep north-facing rock walls and more gentle south-facing slopes. Lithology is dominated by Triassic limestone. The main valley floor and the talus slopes are characterized by a variety of sediment storage types developed in postglacial times. Due to natural rockfall dams, three large alluvial plains (Golfplatz, Vordere and Hintere Gumpe) as almost closed sediment sinks were created in the Holocene leading to negligible clastic sediment output (see fig. 1).

Based on the idea formulated by Chorley & Kennedy (1971), the basin represents a typical landform assemblage of a sediment cascade (Schrott et al. 2003). It can be divided into three subsystems, more or less connected to each other through processes and influenced by regulators (e.g. vegetation, slope, etc.; see fig. 2). With an area of 14 km2, Subsystem I (rock wall) represents more than 82 % of the investigated catchment, but the amount of stored sediments is of minor importance. The main accumulation area includes subsystem II (slope) and III (valley bottom) and covers just 3.4 km2 (18%) (see fig. 1).

In a first step, the distribution of 126 single sediment storages (e.g. talus sheet, talus cone, rockfall deposits, etc.) and geomorphologic processes (e.g. rockfall, debris flow, etc.) as well as the state of activity was gathered by means of detailed geomorphologic mapping and field reconnaissance (see fig. 1). In addition, the degree of geomorphic coupling between subsystems I, II and III was assessed.

In order to calculate sediment volumes, geomorphometric modelling and geophysical surveys were carried out. On the base of digital elevation models (DEM), the glacial trough was modelled using more than 30 cross sections (polynomials) fitted to the rock walls and a mathematical derived "DEM Bedrock" was calculated (see fig. 3 A). In areas of uncertainty this "DEM Bedrock" was adjusted with geophysical information (refraction seismics) leading to a "DEM corrected" (see fig. 3 B). The difference between this "DEM corrected" and the actual surface ("DEM surface") delivered a total valley fill volume of 0.07 km3. Without geophysical correction the calculated sediment volume would have been overestimated at approx. 0.1 km3.

For calculating a hypothetical Holocene rate of sediment input, temporal information is required. Relative dating of the late glacial terminal moraines estimates a time span of 12000 years BP since deglaciation (Hirtlreiter 1992). Assuming an almost "empty basin" at this time a mean (linear) rate of 4830 m3/a of sediment input would be required to explain the total volume of stored sediment.

The present-day rate of sediment input is based on field measurements, including the quantification of avalanche, slopewash and rockfall deposits during a period of four years (Heckmann 2006; Krautblatter et al. accepted). An extrapolation of the data from the measurement sites to other active parts of the catchment delivered an overall rate of present-day sediment input of 1560 m3/a.

These findings can be interpreted in a paraglacial context. Due to increased sediment availability, the concept of paraglacial landscape adjustment states an accelerated geomorphodynamic shortly after deglaciation with an exponential decrease afterwards (see fig. 4; Ballantyne 2002). As the recent rate of sediment input on the catchment scale cannot explain the total amount of stored sediments, former rates (after deglaciation) must have been higher. Therefore, the paraglacial concept is supported at this scale. In contrast, the inverse behaviour at the smaller scale contradicts the paraglacial model.

The opposed scale-dependent patterns of recent sedimentation in the Reintal basin underline the high spatio-temporal variability of clastic sediment fluxes in alpine environments. In this context, the study exemplifies the difficulty of getting reliable data on sediment fluxes and rates of sedimentation and supports arguments emphasising the strongly inhomogeneous patterns of mechanical denudation in mountain areas as mentioned by Caine (2004).

This study was part of the collaborative research project SEDAG (Sediment cascades in alpine geosystems) funded by the German Research Foundation (DFG). For more information on this study we refer to the websites cited below. Findings from SEDAG have been used to create a geotrail and guide book of the Reintal valley, which are accessible online as well (see http://www.reintal-webgis.de & http://www.geomorphology.at).

« Lateroglacial landforms in subtropical high mountains: A case study from the Karakoram and Hindukush Mountains       Slope formation in the Flysch zone of the Vienna Forest (Austria) »