Slope formation in the Flysch zone of the Vienna Forest (Austria)

Location of the study area in the Vienna Forest NW of Vienna city. Details 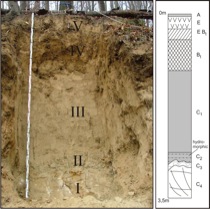 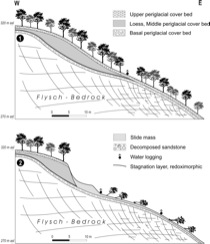 Hide
Temporal sequence of morphodynamic processes and slope stability, phase 1 and 2. 1. The first initial phase is constituted by a completely developed sediment and soil profile. Periglacial cover beds and loess sediments have been deposited on top of the bedrock. 2. During the second phase of slope formation, a first landslide occurs. In the course of the process, the permeable loess deposits slide on the top of the basal periglacial cover bed, which mainly consist of impermeable clay and marl (Damm and Terhorst, 2009). Details 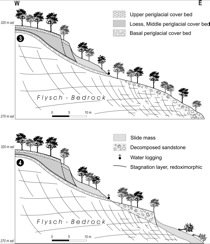 Hide
Temporal sequence of morphodynamic processes and slope stability, phase 3 and 4. 3. Subsequent to the sliding of the loess layers, erosion of the slide mass starts. In the case that the periglacial layer disappeared completely, bed rock is affected by decomposition under the influence of percolation water. 4. As a result of decomposition along joint and bedding planes, isolated blocks are dissected inside of the sandy regolith. After exceeding a “critical mass” the decomposed sandstone stratum is affected by further slides (Damm and Terhorst, 2009). Details

Hide
Temporal sequence of morphodynamic processes and slope stability, phase 5. Subsequent to decomposition and a second slide phase the phases three and four may subsequently reoccur in alternating patterns and/or rockfall start in the decomposed sandstone (Damm and Terhorst, 2009). Details

Human activities take place in a space, which is influenced mainly by Quaternary sediments and forms. They affect present day geomorphological processes and hazards (e.g. Arnaud-Fassetta et al., 2005). To predict future environmental developments, also concerning landuse and planning management, it is essential to analyse and understand the past processes that led to recent conditions (Damm, 2006). Furthermore, the reconstruction of former landscapes and ecosystems is a prerequisite to evaluate and to measure human modifications in space and time. It is evident that the spatio-temporal susceptibility of morphodynamic processes depends on a long-term development (Neuhäuser and Terhorst, 2007). Thus, in studying natural hazards and/or geo-ecosystems as a core field of applied geomorphology, the chronological aspect plays an essential role for the assessment of landscapes (Birkeland et al., 2003; Trimble, 1975).

The Flysch zone of the Vienna forest is an undulating landscape in the central European low mountains (Fig. 1). Flysch is composed of layers of (calcareous) sandstones, marly shales, calcareous marls and clay shists. The interbedded sediments are covered by Pleistocene periglacial cover beds and loess. In general, the Flysch regions are considered to be susceptible to landslides. Both petrography of the bedrock and the soil mechanical properties of the Quaternary sediments control the slope dynamics in the study area. The structure of the Quaternary sediments and occurrence of the dense bedded basal cover bed are responsible for the development of landslides in steep slopes in the northern Vienna Forest. The discrepancy concerning permeability in loess influenced layers and the underlying basal cover bed, consisting mainly of marly and clayey material, is one of the essential controlling factors for the initiation of landslides.

The presented work analyses cycles of slope formation with respect to long-term Quaternary processes and current process dynamics. It aims to distinguish steps of slope formation for the Pleistocene and Holocene periods, and to gather information on the degree of landscape changes. Indeed, datable material is rarely available, but chronostratigraphical classification can also be done by analysing the development of soils and sediments (see Birkeland et al., 2003). In this context, the occurrence of loess on the slopes of the Vienna Forest is of major importance. Palaeo-surfaces covered by loess are at least of Pleistocene origin. Furthermore, the distribution of three main Pleistocene periglacial cover beds allows distinguishing Pleistocene forms from Holocene ones (cf. Semmel, 1996; Terhorst, 2007). In general, the cover beds formed by solifluction on top of permafrost in the former active layer. Cover beds in European low mountain areas are subdivided in loess-bearing cover beds, namely the upper and middle periglacial cover bed, and the loess-free basal periglacial cover bed. Concerning slope stability it is important to note that the basal periglacial cover bed in the study area consists of marly and clayey components, mainly.

On the basis of pedological and geomorphological investigations, it is possible to infer five morphodynamic phases of slope formation that partly reoccur in an alternating pattern in the study area.

(2) During the second phase, landslides affect the surface. In the course of the process, the permeable loess deposits slide on the top of the basal periglacial cover bed, which mainly consist of impermeable clay and marls. This landslide led to a landscape change in terms of geomorphology, sediments and soils (Figure 3/2). In the middle and lower slope, most Pleistocene sediments were removed. Exclusively the basal periglacial cover bed is partly conserved.

(3) Subsequent to the sliding of the loess layers, a transition to the third phase is initiated, which corresponds to erosion and weathering within the sequence. For the calcareous and marly sandstone, the tendency for rapid and profound decomposition in the course of decalcification is a key factor. In the case where the periglacial layers disappeared completely, bedrock is exposed at the surface and affected by decomposition under the influence of percolation water (Figure 4/3). Due to this process, more stable blocks of sandstone are separated inside a predominant sandy matrix.

(4) The decomposition process prepares the onset of the fourth phase of slope evolution, with a second sliding phase (Fig. 4/4). Here, the deeply decomposed sandstone is affected by further slides in the lower slope.

(5) Afterwards, the phases three and four may reoccur in alternating patterns and/or rockfall start in the decomposed sandstone (Fig. 5/5). At present, relevant slopes are susceptible to rock and debris fall as well as to translational slides.

The study indicates that different stages of slope formation as described by the five phases are present in the study area. On the base of last Glacial topography and sediments (phase 1) mass movements, erosion, and disintegration of bedrock are active (phase 2 to 5) since the incision of the creek Hagenbach in the Late Glacial and Holocene. There are only minor areas that show undisturbed conditions, most of the studied slopes are affected by mass movements. In particular, exposed sandstone, due to intense decomposition, is predestined to translational slides as well as to rockfall processes. The specific stages of slope formation cause a distinct spatial distribution of Quaternary sediments and solid rock at the present land surface and affect the recent morphodynamics in the study area sustainably.

Damm, B., 2006. Simplified Planning Regulations in Germany and the Effects of Landslides. Journal of Environmental Planning and Management 49/5, p. 777-790.

Damm, B. and Terhorst, B., 2009. A model of slope formation related to landslide acitivity in the eastern Pre-Alpes, Austria. In: Terhorst, B., Solleiro-Rebolledo, E. and Veit, H. (Eds.), Reconstructing and Modelling Quaternary Landscapes, Geomorphology special issue, accepted.

Neuhäuser, B., Terhorst, B., 2007. Landslide Susceptibility Assessment Using Weights-of-Evidence applied on a Study Site at the Jurassic Escarpment of the Swabian Alb (SW-Germany). Geomorphology 86, p. 12-24.