The Enigma of Inner Gorges in the Alps 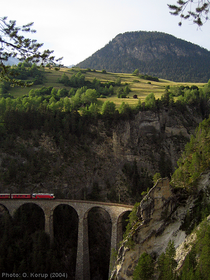 Hide
Inner gorges in the European Alps occupy significant tracts of the trunk river network, particularly in calcareous sedimentary rocks, where they may be more than 200 m deep in places. Note red train and viaduct for scale. Zuegenschlucht, Swiss Alps. Details 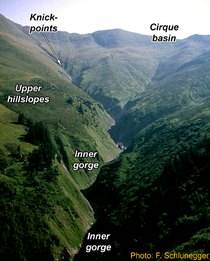 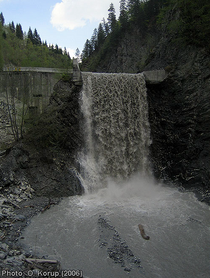 Hide
Schraubach, Swiss Alps. This small drainage basin has some of the highest contemporary sediment yields in the Alps, and discharge is nearly almost turbid at low flow. This sediment retention basin is one of many to stop the river incising into the gorge walls, thus contributing to undermining hillslopes and triggering deep-seated landslides along bedding planes. The village of Schuders is slowly gliding on top of one of the larger landslides. Details 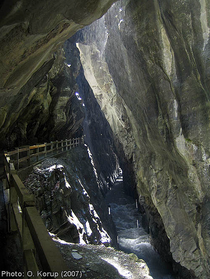 Hide
Tamina gorge, Switzerland. This slot gorge cut in carbonate rocks has a pronounced asymmetry of its walls and features a natural stone bridge, somewhat casting doubts on its solely postglacial fluvial origin. This is allegedly the place (or one of the places) where Sherlock Holmes died… Details

Inner gorges form at the interface between hillslopes and river channels. Seen in cross section, they form an often near-symmetrical convex break the steepness of the hillslope profiles. This distinctive valley-in-valley topography may occur in both rock and debris slopes (Kelsey, 1988). Many slot gorges, and also some canyons, can be considered to be inner gorges. Several mechanisms have been proposed for the formation of inner gorges cut into bedrock. These include relief rejuvenation by fluvial incision in response to rapid base level drop, linear erosion along weakened fault-zone rocks, repeated glaciations during glacial-interglacial cycles, frequent pore pressure-driven landsliding focused at hillslope toes, or incision during catastrophic outburst flows from natural dam failures. To show that disentangling these formative mechanisms is not a merely academic exercise, but a major challenge to understanding alpine landscape evolution, we consider here inner gorges in the European Alps:

In the northward draining rivers of the central European Alps inner gorges occur mainly in calcareous sedimentary rocks, where they can be several hundred meters deep and extend for many kilometers upstream of major confluences. In contrast, inner gorges in crystalline rocks are less numerous and deep. In the eastern Swiss Alps, inner gorges occupy some 10% of the trunk drainage network, although the total percentage is difficult to estimate, given that many gorges have been artificially impounded for hydropower generation (Korup and Schlunegger, 2007). Some of the most prominent and widespread inner gorges occur in soft Mesozoic calcareous schists, which grade into the lithologically very similar lower Tertiary flysch rocks of the Penninic Nappes. The river longitudinal profiles of these inner gorges formally resemble the theoretically predicted transient response of detachment-limited bedrock rivers to rapid base level fall by headward knickpoint migration. Thus it seems reasonable to assume that these gorges were cut into a formerly ice-sculpted valley floor since the Last Glacial Maximum, thus acting to return river channels to base level from positions of hanging valleys.

Potential motors for such a postulated incision pulse comprise base-level falls induced by downwasting of trunk valley glaciers, differential glacio-isostatic rebound, and neotectonic activity. The hypothetical postglacial incision of these inner gorges requires local downcutting rates in excess of 20 mm/yr, and hillslopes to adjust by frequent landsliding toward development of a threshold state. Simple rock-slope stability models indeed suggest that many of the gorge walls are at a mechanical threshold limited, however, to the lower 25% of total hillslope relief (Korup and Schlunegger, 2007). However, the required fluvial bedrock incision rates rival or even exceed those reported from tectonically much more active and rapidly uplifting mountain belts such as the Himalayas! So are the inner gorges in the Alps testimony to comparable geomorphic process, if not tectonic, activity?

Anecdotal evidence from the days prior to extensive river training refers to frequent debris flows from many of the drainage basins, in which inner gorges slice their way into soft calcareous schists and flysch. Moreover, the volume of well preserved debris fans fed by these basins, and perched on dated alluvial surfaces, require towering rates of sediment yield averaged over most of the Holocene. These yields are of the order of 104 m3/km2/yr, which we would typically associate with rapidly eroding terrain rather than the seemingly quiescent Alps, where mean postglacial denudation is of the order of 1 mm/yr (Schlunegger and Hinderer, 2003). It remains unknown, however, whether such soaring yields were sourced from bedrock erosion or valley fills.

Along these lines, there is some compelling evidence that argues in favor of a pre-Holocene origin for at least some of the inner gorges in the Alps. There are several independent, though largely qualitative, observations of older sediment fills comprising indurated and strongly weathered morainic or glacifluvial material in some of the gorges (e.g. Tricart, 1960; De Graaff, 1996). Rock knobs and truncated spurs at tributary junctions attest to several episodes of gorge cutting, with former bedrock channels being left stranded above river confluences. Clearly, both such sediment fills and "avulsions" in bedrock would call for even higher (and previously unreported) bedrock incision rates, were we to be supportive of a purely postglacial age of these gorges.

Why is this discussion about the onset of gorge incision so significant? Overall, any pre-Holocene age of the inner gorges implies that a fluvially sculpted gorge topography must have survived at least the last glaciation. This could have been achieved by subglacial sediment fill during glacial cycles. Importantly, this would suggest that glacial erosion was not able to fully eradicate the fluvial bedrock topography formed during interglacials. Alternatively, much of the gorge relief could have been formed by subglacial meltwater, and much of the current gorge topography could be inherited from non-fluvial processes. This may complicate analyses of bedrock river longitudinal profiles, which have been shown useful to quantitatively constrain fluvial erosional response to tectonic deformation, climatic oscillations, or changes to sediment flux. Exposure dating of strath terraces, pothole surfaces, or otherwise "fluvially" polished surfaces flanking actively incising bedrock rivers may yield erroneous rates of river downcutting if they were partly formed and thus shielded by ice.

« Geophysical prospecting on a complex rock glacier in the semi-arid Andes of Argentinia (Morenas Coloradas, Mendoza, Argentina)       The Largest Landslides on Earth »