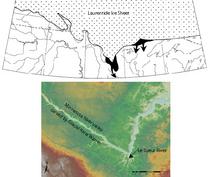 Hide
Figure 2: Long profiles of the Le Sueur, Maple, and Big Cobb Rivers showing the presence of a major knick point around 30-35 kilometers upstream from the mouth of the river. Adapted from Gran et al., 2009. 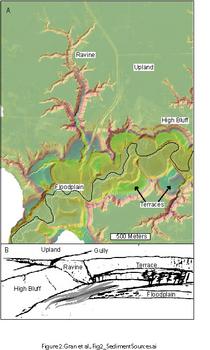 In Minnesota, the rivers are fairly young, geologically speaking. Many are still adjusting from the last glaciation, when most of the state was covered by ice. As the glaciers retreated, water ponded up in front of the stagnating ice, forming many large pro-glacial lakes. One of these lakes, glacial Lake Agassiz, first formed in western Minnesota and eastern North Dakota (Figure 1) and eventually covered much of central Canada in later stages of its existence.

Glacial Lake Agassiz drained several times through its southern outlet, releasing a torrent of water known as glacial River Warren (Figure 1). River Warren carved a deep valley straight across central Minnesota, turned north 90 degrees, and charged into what is now the Twin Cities metropolitan area where it joined with the Mississippi River. The valley it carved was 45 meters deep at its mouth and 70 meters deep near the bend at Mankato. The first incision event was around 11,500 radiocarbon years before present (rcbp). Other outlets opened up by 10,900 rcbp, and glacial Lake Agassiz drained elsewhere. River Warren was active again periodically between 9,600 and 8,200 rcbp before it was abandoned as an outlet for Lake Agassiz (Thorleifson, 1996). Take a look at the image of southern Minnesota in Figure 1 and see if you can imagine the large lake to the west fueling a massive river carving a swath across the central part of the state.

At the time glacial River Warren was formed, most of the rivers in the area were low-gradient channels meandering across the uplands. What happened to these channels when the deep valley was excavated? The main valley acts as local base level to any tributaries flowing into it. When River Warren incised its valley, tributaries experienced a sudden drop in local base level, instantly stranding these channels well above the mainstem channel. Knick points formed as large waterfalls, cascading from the low-gradient uplands down 45-70 meters to the valley below.

Waterfalls can migrate upstream as the rock they spill over erodes through time. In order to maintain a sharply delineated front, the waterfall must flow over a hard caprock which serves as the lip of the falls. In several tributaries along the valley, you can still see bedrock waterfalls, remnants of the initial carving of the valley. They have migrated upstream through time. However, knickpoints eroding through tills or other unlithified sediments cannot maintain the sharply delineated front of a waterfall and they likely rolled-back, changing into rapids. These rapids eventually gave way to steep reaches along the channel that are almost indistinguishable from the rest of the channel until you look at the whole watershed.

The steep reaches show up in long profiles of the channel, plots showing the elevation of channel bed plotted against distance upstream. Figure 2 shows the long profiles of several channels in the Le Sueur River valley. If these channels were in grade, well-adjusted to their local base level and water and sediment inputs, you would expect to see a concave-up graded channel. Channels in the Minnesota River valley are clearly not in equilibrium with their local base level. On the Le Sueur River, you can see the knick zone has migrated about the same distance upstream on all three of its tributary channels. Since we know when the Minnesota River valley was formed and we know how far upstream the knickpoint has migrated, we can actually calculate a headward erosion rate of ~3 m/yr (Gran et al., 2009).

As a river migrates back and forth, it forms a valley with an active floodplain. If the channel suddenly cuts down (as a knick point moves through, for instance), these surfaces are stranded as terraces. The river then proceeds to make a new floodplain at the lower elevation. These terraces are ubiquitous in tributary valleys and show up very clearly as flat areas set into the valley on a topographic map or digital elevation model (Figure 3).

As the rivers cut down, ravines also formed (Figure 3), connecting the relatively flat uplands with the river now tens of meters below the upland surface. These steep drainages have been extending outward through time, incorporating more and more of the uplands into the channel network. What we are seeing is the development and integration of a new channel network. If you fast forward in time, you can picture more and more of the flat glacial uplands being incorporated into ravines through time as they expand to form larger and larger watersheds. The details of timing between ravine growth, fan development at the mouths of ravines, terrace formation, and on-going incision on the channel can be complicated, but the relative chronologies can be worked out through simple topographic relationships.