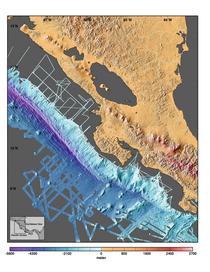 Hide
Digital elevation model of southern Central America, showing NASA-SRTM topography for Nicaragua and Costa Rica linked to offshore IFM-GEOMAR multi-beam bathymetry (courtesy of C. Ranero, ICM-CSIC, Barcelona; after Ranero et al., 2008). This image reveals the relationship between the morphology of the subducting Cocos Plate and the morphotectonic structure of the overriding fore arc and volcanic arc of the Caribbean Plate and Panama block. The Nicoya Peninsula lies along the Middle America Trench at the center of the image. Courtesy of C. Ranero, ICM-CSIC, Barcelona, Spain.

Hide
Geologic map of the Nicoya Peninsula showing boundaries of the Nicoya seismic gap (orange dashed lines), epicenters of large subduction earthquakes (red circles), and aftershock zones of the 1950, 1978, 1990, and 1992 events (red dashed lines). The limits of the 1990 and 1992 ruptures coincide with the edges of the seismic gap. The last major rupture of the Nicoya segment (1950; M=7.7) produced 1-2 m of coseismic coastal uplift (Marshall and Anderson, 1995). By Jeff Marshall (earthquake data from Protti et al., 2001). 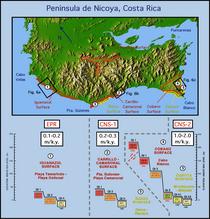 Megathrust earthquakes along subduction zones are among Earth's most powerful and deadly natural hazards. Over a quarter of a million people were killed by the 2004 Indian Ocean tsunami generated by the Sumatra-Andaman megathrust earthquake. Such catastrophic events are also notable for the sudden geomorphic change that they bring to coastlines through coseismic uplift and subsidence (e.g., Plafker, 1972). Understanding how these sudden changes affect the long-term growth and decay of coastal topography is an intriguing puzzle for geomorphologists.

Costa Rica is part of the Central American volcanic front, formed by subduction of the Cocos tectonic plate beneath the Caribbean plate at the Middle America Trench (Fig. 2). The two plates converge at a rapid rate (~9 cm/yr), resulting in a high seismic potential, as demonstrated by multiple large magnitude (>M 7.0) earthquakes during the past few centuries (Fig. 3). The last major earthquake centered beneath the Nicoya Peninsula occurred on October 5, 1950 with a magnitude of Mw 7.7. This event killed and injured dozens of people, severely damaged buildings and roads, and produced landslides, liquefaction, and coseismic coastal uplift (Marshall and Anderson, 1995). Based on seismologic and geodetic studies, the Nicoya Peninsula is now recognized as a mature seismic gap, with the next large earthquake expected in the near future (Protti et al., 2001). In 1950, the Nicoya coast was a sparsely populated frontier with thick rainforests and isolated rural villages. In recent years, however, this beautiful region has become an epicenter for rapid coastal development related to Costa Rica's world-renowned tourism trade. Construction of hotels, condominiums, and vacation homes proceeds without heed for the lurking earthquake hazard. It is critical, therefore, that geoscientists, government officials, and local residents develop a better understanding of the megathrust earthquake cycle beneath the Nicoya Peninsula.

The following story provides a graphic account of one man's experience during the 1950 Nicoya Peninsula earthquake. His recollection of dramatic coastal changes is similar to those of other earthquake survivors interviewed by geoscientists studying seismic cycle deformation patterns (Marshall, 1991).

The sky dawned dark and cloudy on the morning of October 5, 1950. It was rainy season along the Pacific coast of Costa Rica's Nicoya Peninsula. In scattered coastal villages, farmers and ranchers gathered along the shoreline waiting for the cargo launch to arrive from the port city of Puntarenas. Their ox-carts were full of freshly harvested corn, ready for shipment to the mainland. Near the village of Garza, Don Daniel Ruíz Matarita was riding on horseback along the beach with several other men. The horses were skittish, and the nearby rainforest echoed with the roar of nervous howler monkeys. Suddenly, without warning, the ground heaved violently, trees and branches toppled over, and the beach exploded with geysers of water and sand. "Earthquake! We're done for!" shouted one of the men. Their horses bolted in terror, throwing the riders to the ground. Huge chunks of rock toppled off of nearby cliffs, crashing into the water with a tremendous splash. Certain they were doomed, the men prayed for salvation. When the great earthquake finally subsided, Don Daniel and his companions were amazed and thankful to be alive. As they stood up and looked around, they saw that the ocean curiously had withdrawn from the bay, leaving a wide expanse of barren rocks, seaweed, and flopping fish. Seizing the moment, the men snatched up handfuls of sea bass, content at least that their bellies would be full in this time of disaster. In the days following the earthquake, Don Daniel recalls that the sea did not return as they had expected. He heard stories from others that the same thing had happened all along the central Nicoya coast. Don Daniel remembers one place where the drop in sea level was particularly obvious, a rocky headland known to local fisherman as "La Raspa Nalgas" (The Butt Scratcher). Prior to the earthquake, it had been impossible to get around this rocky point on foot, as it was under water at even the lowest tides. But, after the quake one could walk around the headland without entering the water, indicating a drop in tidal levels near a grown man's height. Don Daniel recalls that it took nearly four decades for the ocean to reclaim its former level, quickly during the first few years, then slowly thereafter. High tides now reach further inland in many places than they did before the 1950 earthquake.

Such stories provide compelling evidence for abrupt coseismic uplift followed by gradual postseismic and interseismic subsidence. The return of tides to their pre-1950 levels indicates that the Nicoya Peninsula is locked and loaded for the next major earthquake. Similar movements have been observed along convergent margin coastlines worldwide. Famous examples in the geomorphic literature include Chile, Alaska, Japan, Cascadia, Vanuatu, and Indonesia (Plafker, 1972; Matsuda et al., 1978; Bull, 1985; LaJoie, 1986; Atwater, 1987; Taylor et al., 1987; Sieh, 2006). As the locked interface between two converging tectonic plates snaps free, the upper plate springs forward releasing stored elastic energy in the form of seismic waves (the earthquake). The seaward edge of the plate nearest the subduction trench rebounds upward, resulting in sudden coseismic uplift (and often a tsunami). In contrast, the landward region further from the trench subsides as strain is released. As the plates become locked again, and elastic strain begins to build, gradual interseismic movements generally occur in the opposite direction (subsidence in the cosesimic uplift zone and vice versa). This cycle of vertical motion in response to elastic strain accumulation and release is an integral part of the way subduction zones work.

An interesting question for geomorphologists is how this short-term cycle of elastic motion translates into longer-term permanent deformation that generates topographic relief. How much of the seismic cycle deformation is non-recoverable and permanent? Does coastal topography mirror earthquake cycle deformation patterns? Are earthquake rupture zones long-lived features or are they transient, changing location and shape through time? What other processes contribute to the creation of permanent coastal topography along convergent margins?

Field based geomorphic research, in conjunction with instrumental seismology, geodesy, and marine geophysical studies (see NSF MARGINS Program web site), are helping to advance our understanding of megathrust earthquake hazards along the Nicoya Peninsula seismic gap. While the recollections of Don Daniel Ruíz Matarita and his neighbors provide us with a dramatic window into the human experience of a major Nicoya Peninsula earthquake, geoscientists are now helping elucidate a scientific picture of the natural processes behind such events.