Hide
This image shows a mobile knickpoint on a tributary to the Waipaoa River in New Zealand. The trunk stream gorge in incised and other tributaries to that channel also contain knickpoints. Benjamin Crosby, Idaho State University.

Hide
This image shows a longitudinal profile of a typical knickpoint from the Waipaoa River showing the step in the channel profile as well as the abandoned fluvial surface tracing upstream to the location of the current knickpoint. Benjamin Crosby, Idaho State University. 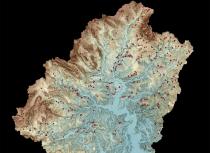 Hide
This map shows the distribution of mobile knickpoints in the Waipaoa River watershed. Note that the knickpoints are in almost every tributary to the river. Benjamin Crosby, Idaho State University.

Waterfalls and rapids along rivers have captured the attention of both scientists and the general public for thousands of years. Beyond providing awesome displays of the power of nature, these features can also provide evidence for past geologic events such as earthquakes, glaciers, landslides or sea level change. They can also reveal the unique character of the underlying bedrock or help identify active tectonic structures. Understanding the formation and evolution of these features is of pertinence not only to studies of landscape evolution but in practical decisions regarding land-management and hazards.

Though falling and cascading waters can transfer a tremendous amount of potential energy into eroding the bed of a river it is not always immediately obvious whether the steep region is gradually cutting its way upstream or whether it is at a fixed location. There are good reasons for either scenario to occur and this vignette discusses how to use geomorphic evidence to distinguish whether the feature you observe is mobile or stable.

A knickpoint is defined as a steep region along a river profile and can vary in form from a single waterfall to a high-gradient region extending for many kilometers. The uncertainty regarding the origin and mobility any individual knickpoint is understandable. Stable knickpoints can be generated where rivers flow over resistant lithologic units or active faults. Stable knickpoints can also be generated where ample coarse sediment supply inhibits sediment transport or erosion such as tributary junctions or at the toes of large landslides. These knickpoints are found at a fixed in position along the river channel due to a local control.

Mobile knickpoints on the other hand are initiated from some downstream event and propagate upstream, communicating a signal of erosion throughout a river network of trunk and tributary streams. The initial downstream incision can be created by a wide range of processes that generate a signal of relative base-level fall including sea level fall, fault rupture, drainage capture, stream straightening. Regardless of the process that creates the lower elevation downstream, base-level fall initiates a steep region, thus enhancing erosion at that location and, as a consequence, driving the base-level fall signal upstream.

Because knickpoints seldom move fast enough to be measured, it is often difficult to determine if one is mobile or locally controlled. The best evidence for a mobile knickpoint is the presence and alignment of abandoned river surfaces (terraces) that project from downstream to the top of the knickpoint. The presence of knickpoints of similar height in downstream tributaries provides further support to the mobile knickpoint hypothesis. A good example of a landscape with a host of mobile knickpoints is the Waipaoa River on the North Island of New Zealand. There, terraces with an abandonment age of around 18,000 years ago can be traced from the lower mainstem upstream to knickpoints in both tributaries and large trunk streams. Because the quality and strength of the rock vary, the knickpoints throughout the basin vary in morphology from vertical waterfalls to pool-cascade reaches, even though they were all created by the same base level fall event. Niagara Falls also is a good example of a mobile knickpoint, initiated by a base-level fall event driven by drainage capture.

While best evidence for a mobile knickpoint might be found downstream, the best evidence for a fixed knickpoint is found at the site of the feature itself. If there are no terraces or tributary knickpoints downstream, the steep feature may simply reflect a local control. These local controls could be identified by measuring a change in the strength of the bedrock or recognizing an enhanced supply of coarse material to the channel. A good example of a fixed knickpoint comes from the rapids of the Colorado River. There, the high gradient portions of the channel are forced by the accumulation of coarse, immobile boulders washed into the main stem river by debris flow events in the tributaries. Another good example comes from the Oregon Coast Range where the waterfalls are commonly found where the soft Tyee Sandstone is intruded by narrow basaltic dikes. This igneous rock resists erosion better than the Tyee and thus requires steeper slopes to be effectively eroded.

USGS: Monitoring of Coarse Sediment Inputs to the Colorado River in Grand Canyon