Using an Applet to Demonstrate a Sampling Distribution

Hide
This page first made public: May 9, 2007
This material is replicated on a number of sites as part of the SERC Pedagogic Service Project 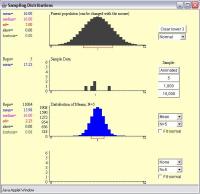 This demonstration can be used as a first introduction to the concept of sampling distributions. It has been applied at the undergraduate level, but could also be used at the advanced placement level as well. Including the time spent for viewing the applet, this activity can be completed in a 50 minute class period.

Prior to this activity students should be able to calculate the mean and should have seen distributions of many different shapes.

This demonstration is appropriate for classes as small as 20 students to those large as 200 students. In either, case you want to have at least 20 samples of 30 coins. For small class sizes students should work on individually. For a large class size, break students into groups of up to 3.

Careful planning will make this demonstration go smoothly. Some specific tips include: