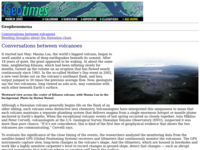 This article, published in Geotimes in 2003, summarizes controversial results from Ocean Drilling Program Leg 197 suggesting that the bend in the Hawaiian-Emperor seamount/island chain may be the result of motion not of the plate, but of the hotspot itself. The article interviews scientists involved in the discovery, as well as scientists who have not embraced the moving hotspot theory, but rather believe that "true polar wander" is responsible for the Hawaiian-Emperor bend.