Practice rearranging equations below using the "rules" that you have just learned. Answers are provided (but try doing them on your own before peeking!) You can download a sheet with all the questions (Acrobat (PDF) 127kB Jul25 09) so you can print them out to try on your own.

Many problems in the geosciences deal with the concept of velocity, from stream flow to plate motion. Being able to manipulate the equation for velocity (v = d/t) gives you a powerful tool for understanding the world around you. And there are two other equations that you can get by rearranging the equation that you probably already know for velocity (also rate)!

Problem 1:Generally, we know the equation for velocity (a rate) to be: 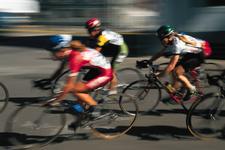 This equation can be rearranged so that you have an equation for distance (d) and time (t). Use the equations that you manipulated above to solve the following problems: 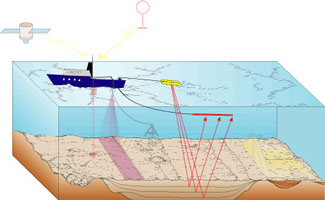 Hide
Cartoon showing Woods Hole Science Center Seismic Profiling scheme photo from Woods Hole Sea Floor Mapping Project .
Problem 2:A wave traveling downward from the surface of the ocean at 1.5 km/sec takes six seconds to reflect off the ocean floor. How deep is the ocean at that site?

Show me how to calculate the depth

Problem 3:Imagine that you are working with Ms. Homeowner to understand the groundwater flow in her area. She is particularly interested in an underground tank that is located 2.6 km from her home. You have measured the velocity of the groundwater to be 0.033 km/day. About how long will it take any contaminants leaking from the tank to reach Ms. Homeowner's well?

Show me how to calculate how long

Hide
So, the answer is that it would take about 79 days for the contaminant to get to Ms. Homeowner's well.

Density plays an important role in our understanding of the physical properties of Earth materials. The equation for density is similar to that for velocity and, as such, it can be manipulated so that you can solve for any of the variables involved. The next few problems utilize the equation for density: 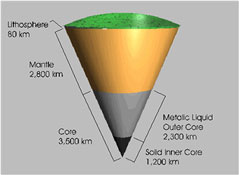 Hide
Diagram showing the layers of the Earth and their thicknesses. photo from USGS - Science of Earthquakes.

which can be shortened to:

Problem 1: Manipulate (rearrange) the density equation (above) to create an equation for mass.

Hide
Begin with the density equation:

Multiply both sides by v (to isolate m):

And you end up with an equation for mass:

Problem 2:Manipulate the density equation to create an equation for volume.

Hide
Begin with the density equation:

Multiply both sides by v:

And you end up with the equation for mass that we rearranged above:

To end up with the equation for volume (when you know density and mass):

Use the equations that you manipulated above to solve the following problems:

Show me how to calculate the volume

Show me how to calculate the volume

Isostasy is an important concept in the geosciences that is related to density. The concept of isostasy explains why continental crust sits so much higher than oceanic crust. It involves properties of an object like height and density. It also explains why only a portion of an iceberg is visible above water. The following problems involve an equation that is important to understanding the way that continental crust/oceanic crust behave on the Earth. If you need help visualizing the problem, click on the illustration below to see a larger version. 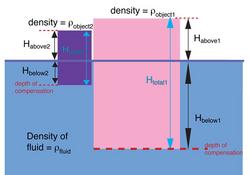 Hide
Illustration of isostatic equilibrium for two stylized blocks with densities and heights labeled. Illustration by Jennifer Wenner.
The equation for calculating the height of an object above the "fluid" in which it is floating is:

Problem 1: Rearrange the equation above to solve for Htotal.

Hide
To isolate Htotal, we divide both sides by

And we end up with Htotal isolated on one side of the equation:

Problem 2: Use the equation that you generated in Problem 1 to calculate the thickness (Htotal) of continental crust if:

Hide
Now that you have an equation for Htotal, you can plug in the numbers and calculate the thickness of the crust. We start with:

Plug in the numbers:

Divide densities (ρ) to get a unitless number:

Perform the subtraction step in the denominator:

and, finally, divide to get the thickness of the continental crust:

Problem 3: Use the information from Problem 2 to calculate the thickness of crust that lies below the mantle (e.g., Hbelow).

Hide
This is a simple subtraction problem but takes a little thinking. Remember that the total of something (e.g., the height of the crust) is the sum of the parts (the height below a line + the height above a line): 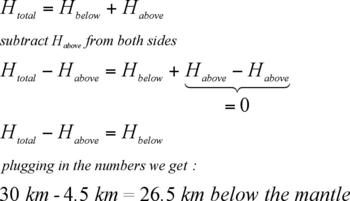 I think I've mastered manipulating equations! Let me try the quiz!
(If this is not how you feel, see the links below for more practice!)

There are many web sites and books that walk you through the algebraic manipulation of equations. You can use these to get more practice with rearranging equations. You may need to go to the library to find some of these.