What should the student get out of this module?

After completing this module, a student should be able to:

Why is it hard for students?

Students have difficulty with density because they confuse it with weight. Things that weigh a lot and have a high density are typically called "heavy," which adds to this confusion. Likewise colloquially "light" can mean both low-density and weighing little.

One way I humorously try to emphasize this difference is by asking "Which is heavier - a pound of bricks or a pound of feathers?" and then using this as a launching pad to talk about these misconceptions. I also use a set of rocks that I have selected that are the same size but very different densities, and a different set that are all the same mass, but different sizes because they are different densities. I then hand them to students and repeatedly ask "which is heavier" and "which is denser"?

Besides this confusion with density and mass, students are not generally familiar with the units of density and cannot determine if their answers make sense or are in the right range. They have difficulty relating various values of density to common objects. to help them with this, I often will off-handedly tell them the densities of the rocks and minerals they experience in their labs. I also like to emphasize the density of water being 1.0 g/cm3, and that anything that has a density lower than that will float.

Students may also struggle with manipulating the density equation. I find this particularly common if they have to solve for volume, since it is in the denominator of the density equation. We have a separate manipulating equations page to help students with this. Along similar lines, students who have trouble with the units may want to use the Units and Unit Conversions page.

Finally, specific gravity is a unitless number, and many students do not understand what a unitless number is. I typically show them how the units cancel because it is a density divided by a density, and then emphasize how this number can be used for comparing densities even if the original measurements are made in wildly different units. This is also a nice place to make a plug for the metric system, in which, because the gram is defined as the mass of one milliliter of water, the numerical value of the density in g/cm3 is the same as the specific gravity.


There are a series of density activities by Len Vacher on the spreadsheets across the curriculum website at SERC. These include: 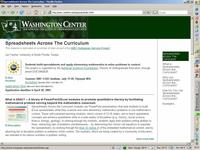 Density, Buoyancy and Convection is a lab from Ann Bykerk-Kauffman of Cal. State Chico designed for a future teacher's course. Students observe the process of convection and then work through a series of hands-on activities in which they explore and build the concepts (including density and buoyancy) that they need to construct an understanding of convection.

Why do some things float while other things sink? A lab/inquiry activity to introduce density by investigating why some objects float and others sink.

Measuring specific gravity to answer questions about subduction is a lab activity from Leslie Kanat from Johnson State College.