Using the products of previous steps, you will use a two end-member mixing model to separate the hydrograph of the West Branch of the Mahoning River for the event that occurred April 3-6, 2014.

Students will quantify the fractions of pre-event and event water during a storm.
Students will discuss what insights the hydrograph discuss flow generation mechanisms and hydrologic behavior of the study watershed.

Students will manipulate data in Excel or another program to perform a series of calculations.

Excel, R, Matlab, or any spreadsheet or data analysis program of the student's choice. The specific examples and screenshots will use Excel for Mac 2011.

Rearrange the two endmember mixing model formula to solve for the unknown quantity: the amount of new water in the stream

From the data we downloaded in Hydroclient, we know Qs and δs. Based on the decisions we made about endmembers, we think we know δn and δo. That means that the only variables we don't know are Qn and Qo. Fortunately,

We can rearrange that to solve for the quantity of old water:

Next we need to apply this equation to our real data, but first it would be helpful to organize the data to make this job easier.


In hydrology, we are often faced with the problem of dealing with data collected at different frequencies. Many sensors that can autonomously take data frequently, but we are usually more limited in terms of data that comes from water samples that must be collected and brought back to the laboratory for analysis. In this case, we have discharge at 15 minute intervals, but isotope data in the stream every 1-2 hours. To further complicate matters, the time points of the isotope samples and the discharge measurements don't quite match up.

There are two basic approaches to dealing with this frequency mismatch. You can interpolate between infrequent water sample data points or you can reduce the resolution of the sensor data. The second approach is what we will do here. There are some elegant ways to do this, but we will take a more manual approach that works in Excel and is fairly simple. Since we are going to do some things manually, now might be a good time to make a new working file for the discharge data and save it in a place and with a name that makes sense to you. After you have a new working file, you might also want to just delete the discharge points before April 3rd and after April 6th, since we won't be doing any isotope calculations with them. This will make your dataset smaller. 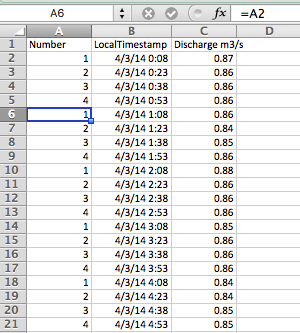 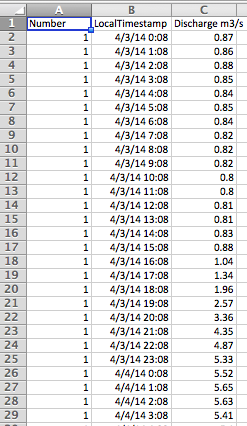 When you have your data arranged this way, it should be pretty easy to match up discharge values with each isotope sample for the first 23 hours. But watch out! On April 4, after 3:00 pm local time, the sampling interval changes. Now the isotope data occurs every 2 hours, collected at 51 minutes after the hour. At this point, you can decide to do another set of sorts, making a repeating series of 1-8 to capture the 2 hour desired interval, or to manually associate the discharge measurements with the sampling times. In the end, however, you do it, you want to know the discharge that was measured at the time closest to each isotope measurement.

Calculate the new water discharge for each time point


You are finally ready to find the new water discharge in the West Branch of the Mahoning River. In Excel or the program of your choice, you want to write an equation that uses equation 4. Remember that the old water and new water endmembers (delta-o or delta-n) are going to be constants, and that the Qs and delta-s terms change with each time point. In Excel, you should be able to write an equation that you can copy down your column, so that each row's calculations are done automatically.

If you have written your equation correctly, your new water discharge will be less than your total discharge. If that's not the case for all or most of your data, chances are good that you've made an error in your equation somewhere. If most of your time points have a new water discharge that is less than the total discharge at that time, but a few points are showing greater new water than total discharge, consider your endmembers. In order for a mixing equation to work, your endmembers need to bracket the mixed dataset (i.e., the stream isotopes). In other words, one endmember should be isotopically more negative while the other endmember is isotopically more negative than the stream water. If that's not the case, you can't do a separation for that time point and it points to problems either with the isotopic analyses or with the choice of endmembers.

Calculate the fraction of new water at peak streamflow


To calculate the fraction of new water for the event as a whole, we want to convert a series of discharge numbers, which represent fluxes (cubic meters per second) into volumes (cubic meters) over the whole timespan that we are taking them to be representative of. For example, if you have hourly data, you want to multiply discharge by the number of seconds in an hour (3600 s/hr) to calculate a volume of streamflow in that hour. Do this for every time point in your total discharge and new water discharge columns, paying attention to the changing sampling frequency of your dataset. Be smart and use equations where possible.

Compare your new water fractions for peak discharge and the whole event to the literature.


In humid, forested regions, new water is typically <50% of the flow at the time of peak discharge and is typically 20-40% of the total event volume. Agricultural areas tend to have more new water, and urban areas tend to have even more new water, especially at the time of peak discharge. Wetlands and impoundments in the watershed tend to decrease the fraction of new water.

Consider what the results of your hydrograph separation tell you about likely streamflow generation mechanisms and hydrologic behavior of the West Branch of the Mahoning River.

Based on what you have learned in other parts of your hydrology education, what do you think the fraction of new water you calculated for the West Branch of the Mahoning River tells you about streamflow generation mechanisms in the watershed?

Optional additional work: Evaluate the effects of the ambiguity in choice of isotopes and endmembers on the results of your hydrograph separation.