Additionally, assessment data from 2018 Student Work was analyzed to provide insight on student skill development. The key findings from the surveys and interviews included the following:

The following jump down links are associated with the respective key finding above. 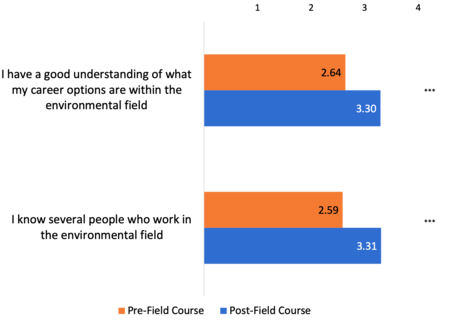 ×
Figure 1. Means of survey items taping awareness of environmental career options and building a professional network. Both items were rated on a scale from 1 (disagree) to 4 (agree). There were statistically significant increases in agreement from pre- to post-field course, ps < .001.

Provenance: Ashley Carlson, Carleton College
Reuse: This item is offered under a Creative Commons Attribution-NonCommercial-ShareAlike license http://creativecommons.org/licenses/by-nc-sa/3.0/ You may reuse this item for non-commercial purposes as long as you provide attribution and offer any derivative works under a similar license.

Additionally, the student survey responses shown in Figure 2, indicate gains in students' understanding of the courses and degrees that would prepare them to pursue an environmental science career. (click the image to enlarge) 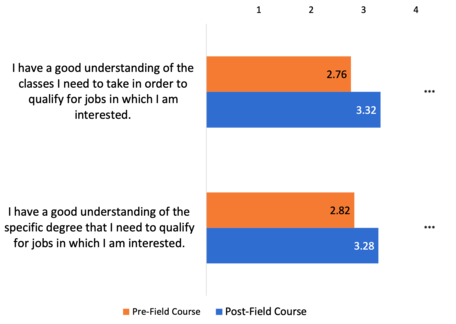 ×
Figure 2. Means of survey items tapping students' understanding of the requisite courses and degrees to pursue environmental science Both items were rated on a scale from 1 (disagree) to 4 (agree). There were statistically significant increases in agreement for both items from pre- to post-field course, ps < .001.

Provenance: Ashley Carlson, Carleton College
Reuse: This item is offered under a Creative Commons Attribution-NonCommercial-ShareAlike license http://creativecommons.org/licenses/by-nc-sa/3.0/ You may reuse this item for non-commercial purposes as long as you provide attribution and offer any derivative works under a similar license.
Similarly in the interviews, many students reported changing their education plan as a result of the field course. Specifically, several students referenced courses they now planned to take, such as hydrology, astronomy, planetary science, geomorphology, and earth science. Another student reported feeling motivated to now pursue a master's degree in an environmental science field and several students indicated that they were more likely to look for extracurricular, independent study, and field opportunities related to environmental science. For example:

"One thing the course did change is ... what I'm looking for in the future in courses. ... [I want to take] more courses like [this one] ... that will give me field experience and that require a little bit more critical thinking..."

Although there was not a statistically significant difference from pre-program to post-program in students' level of agreement that they would "like to work in a field related to environmental science" on the survey, this was likely due, in part, to a ceiling effect related to high levels of interest in environmental science careers at the outset (means > 3.5 on a 4 point scale). This interpretation is consistent with students' interview responses where the majority of students reported either maintaining a high interest in an environmental science-related career or becoming even more interested (n = 10). 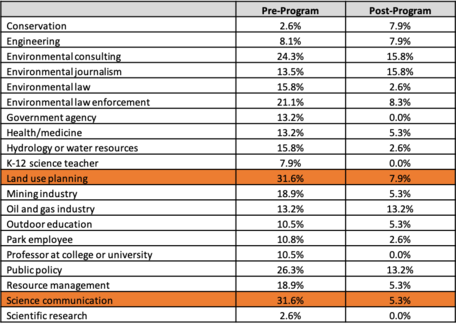 ×
Table 1. Shows the percentages of students who indicated that they did not know enough about the specific career in environmental science to indicate their level of interest.

Provenance: Ashley Carlson, Carleton College
Reuse: This item is offered under a Creative Commons Attribution-NonCommercial-ShareAlike license http://creativecommons.org/licenses/by-nc-sa/3.0/ You may reuse this item for non-commercial purposes as long as you provide attribution and offer any derivative works under a similar license.

Students showed substantial changes over time in their knowledge about specific careers in environmental science. As shown in Table 2, the largest differences appeared for "land use planning" and "science communication" with 24% and 27% declines from pre-program to post-program in the percentage of students reporting that they did not know enough about these careers to make a decision about their level of interest. Students' increased knowledge about specific environmental-science careers was also reflected in their interview responses. Several students reported having only a "vague idea" of specific environmental science-related careers before the field course and noted that the field course helped to improve their understanding of these careers. In 2017, two students were able to identify particular institutions (i.e., NPS and USGS) with which they were interested in working. In 2018, five students listed specific fields (they wished to pursue. Only two of these students noted that they were previously aware of these specific fields.

Gains in Field and Professional skills

As shown in Figure 3, students also reported making gains in a large number of field skills, including measuring stream discharge and explaining the processes involved in the formation of various geomorphic features. (click the image to enlarge) 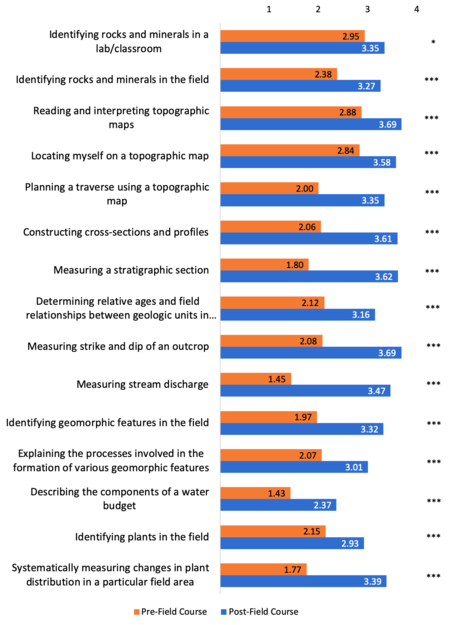 Hide
Figure 3. Mean survey responses for items students' self-assessments of field skills (e.g., measuring stream discharge). All items were rating on a scale from 1 ("I have never done this before") to 4 ("I am competent and comfortable doing this."). There were statistically significant increases in self-rated competence for all 15 items from pre- to post-field course, all p < .05.

Provenance: Ashley Carlson, Carleton College
Reuse: This item is offered under a Creative Commons Attribution-NonCommercial-ShareAlike license http://creativecommons.org/licenses/by-nc-sa/3.0/ You may reuse this item for non-commercial purposes as long as you provide attribution and offer any derivative works under a similar license.
When asked about what they had learned from the field course, several students reported learning a variety of field skills, including how to implement specific field techniques (e.g., how to map a river bed), keep a lab notebook, use Excel, and use specific field instruments, as well as myriad professional skills that will serve them well no matter their career path. For example:

Students reported that the fieldwork was difficult but satisfying. Importantly, students found the support they received from peers especially helpful in facing these challenges:

"I do think that it was very difficult at times and it was really awesome to be with a lot of students who enjoy the same things as you and everybody kind of got together and worked together even though ... some students might have given up because it was so vigorous and so difficult. There were some students who were about to give up but we all kind of pushed each other and just helped each other..."

Students also expressed deep appreciation for the field course as a whole. For example:

"...meeting different professionals in the field... was cool."

"I still think of it often and how incredibly grateful I was to be part of it. How fantastic that it was to be so experiential, and to be learning by doing, it opened up so many perspectives for me in terms of different environmental fields, and also certain things that I don't want to do. I was really grateful."