Tsunami Run-up Prediction for Seaside, Oregon with My World GIS 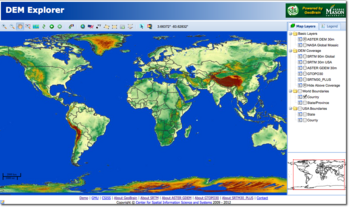 Screen capture of GeoBrain DEM explorer interface.
Note: This chapter was retired in October 2022. The visualization tool (My World GIS) is no longer supported.

In this chapter, you will use Geobrain Online Analysis System (GeOnAS) to access, view, and process digital elevation model (DEM) data. This DEM data will then be imported into My World GISTM in order to visualize the potential sea-level rise that could occur during a tsunami run-up event near Seaside, Oregon. In My World GIS, the DEM contours will be overlaid with additional geographic data, such as roads and schools, allowing you to see the potential impact of a tsunami event on transportation, infrastructure, housing, and natural habitat in this region.

Your task in this chapter is to identify the potential consequences of a five, fifteen, and twenty-meter sea level rise due to a tsunami run-up on the Oregon coast near the town of Seaside. Once you have evaluated the region of potential inundation with My World GIS, you will plan evacuation routes for two schools in the town of Seaside.