The Cascadia Subduction Zone and Tsunamis 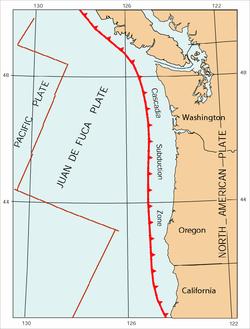 Recent research suggests that a Cascadia Subduction Zone earthquake could create tsunami waves that impact over 1,000-km of coastline in the U.S. and Canada. Source: USGS

The northwestern coast of Oregon is susceptible to both local and far-field tsunamis. The Cascadia Subduction Zone, where the eastward moving Juan de Fuca plate meets the westward-moving North American Plate, is just off the Pacific Northwest coast of the United States and Canada. It is a 750-kilometer long fault zone. This area is very active tectonically, and therefore has the potential to produce large earthquakes and possibly, following tsunami waves. This subduction zone is thought to have last ruptured in 1700.

Additionally, far-field earthquakes throughout the Pacific are also capable of spawning tsunamis that could eventually reach the Oregon coast. Historical records show that since 1812, about 28 tsunamis with wave heights greater than one meter have reached the U.S. west coast. The March 1964 "Good Friday" earthquake caused the most devastating of these tsunamis. The epicenter of this earthquake was near Anchorage, Alaska. The tsunami that followed this earthquake reached coasts all along the western U.S. within six hours. Cannon Beach, a small coastal community in northwestern Oregon was inundated during this event. Just north of Cannon Beach lie the communities of Seaside and Astoria; these communities were also impacted by the 1964 tsunami wave run-up.

What is Tsunami Run-up?

The tsunami run-up is defined as the height of the water onshore observed above a referenced sea level. It is this run-up that has the potential to create massive destruction upon it reaching the shore. Seaside, Oregon is particularly vulnerable to tsunami run-up damage for two reasons: first, it was built at a level very close to sea level and second, the proximity of Tillamook Head (a large rock outcrop) has the potential to concentrate the energy of the waves. Additionally, in the case of a locally-generated tsunami, residents of Seaside would only have minutes to evacuate!

View this seven-minute online video, Tsunami, produced by NOAA for Science on a Sphere, to learn more about the importance of preparing local communities for a possible tsunami evacuation. The video begins with a description of the devastating 2004 tsunami in the Indian Ocean and concludes with a hypothetical tsunami scenario along the U.S. Pacific Northwest coast.

Show me more about tsunami warnings

Tsunami warnings can be divided into two groups: natural or "sensed" warnings and those disseminated via an official agency such as NOAA, the National Weather Service, or your local law or emergency management officials.

Local tsunamis usually leave no time for official warnings. Residents in a tsunami evacuation zone must rely on their senses—if they feel or hear an earthquake, or see or hear unusual wave activity, they should seek higher ground on foot immediately, without waiting for official warning.

Tele-tsunamis are often detected with enough time to warn residents of the potential of an approaching tsunami. Tsunami warning centers rely on an array of sensors including: earthquake information, tide gauges, and tsunami detection buoys. If scientists compile data sufficient to indicate a tsunami threat, official agencies will issue a tsunami warning.


In this activity, users will use a data extraction tool, GeoBrain DEM Explorer, to extract desired Shuttle Radar Topography Mission (SRTM) data for a narrow coastal region near Cannon Beach, Seaside, and Astoria, Oregon. Users will then import their newly-defined layers into AEJEE and analyze the data to select contours showing possible tsunami run-up heights of 5, 15 and 20 meters to determine which areas of the coastal region are at risk for each of the three run-up heights. In addition, users will determine if existing transportation infrastructure (by highway and/or foot) is adequate for escape routes from the Seaside middle and high schools.