Case Study: Can you see the El Nino coming? 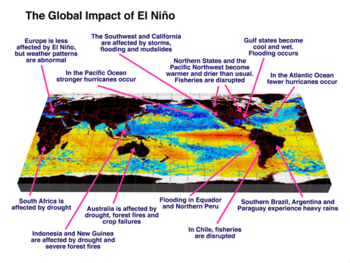 Drought and flood, fire and famine; the symptoms are apparent and yet the causes of El Niños remain mysterious. The suffering produced by the cycle is familiar to those that have endured its wrath. Fortunately, the recent installation of Earth observing satellites has allowed scientists to more closely track the emergence of the oceanic conditions that signal the start of the El Niño Southern Oscillation (ENSO) pattern. This innovation in early detection gives hope that someday soon we will be able to warn nations that an El Niño is impending. 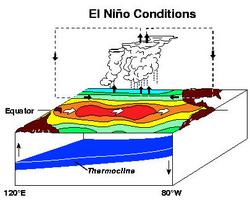 El Niño, or "the boy child", is the name given by Peruvian farmers to an unusually warm and persistent countercurrent that appears off the coast of Peru at irregular three to seven year intervals. The name was chosen for the event because it usually appeared around the time of the Christmas holidays. Unlike the Peruvian fishermen who named the phenomena nearly 100 years ago, we now know that the triggers of this unusual counter-current are changes in the patterns of normal oceanic and atmospheric temperatures, pressures and wind patterns.

Once considered merely a local phenomenon, the El Niño pattern is now recognized as a sign of a larger change in oceanic a circulation that occurs on a global scale. Next to the seasons, ENSO is the strongest element that affects climate on the planet. The impacts of the reversal of the ocean currents are significant. They can include disastrous drought in Australia and Indonesia, and catastrophic floods on the coasts of North and Central America. 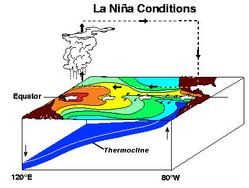 Occurring in sequence with El Niño is La Niña. The La Niña pattern, bringing cooler than normal sea surface temperatures to the Pacific Ocean, is important in its own right. La Niña follows a similar cyclical pattern as its counterpart, El Niño. La Niña is also associated with unusual global weather events. Due to the disruption of the Jet Streams, the La Niña induced events can be as disparate as heavy rains in the Northwest United States, extended droughts in the central U.S. States. Once developed, these ENSO events can last months or even years.

The objective of this exercise is to illustrate the methods used to detect and track El Niño and its sister pattern, La Niña. This early pattern detection has allowed for the mitigation of some of the devastating environmental and human consequences attributable to the ENSO cycle.