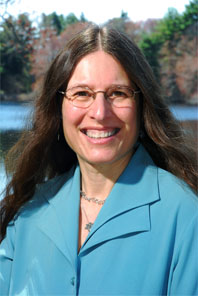 Dr. Tamara Shapiro Ledley is a STEM education consultant, Earth and climate scientist, an En-ROADS Climate Ambassador, an Adjunct Professor at Bentley University, and Secretary of the Education Section of the American Association for the Advancement of Science (AAAS). She was a 2017 Harvard Advanced Leadership Initiative Fellow where she explored her interests in improving climate change education efforts. She served as a senior scientist and chair of the Center for STEM Teaching and Learning at TERC for 20 years. She received her PhD from MIT in atmospheric and climate science and her BS from the University of Maryland in astronomy. Early in her career she led a research program in Earth system science and climate change at Rice University. She joined TERC in 1997 to pursue her science education interests. She led the development of the award winning Earth Exploration Toolbook. She led the development the Climate Literacy and Energy Awareness Network (CLEAN) Collection of rigorously reviewed climate and energy educational resources and has chaired of the CLEAN Network, a professionally diverse community of climate and energy literacy stakeholders. She also led the EarthLabs project that focuses on development of curriculum materials, teacher professional development programs, and science education research focused enabling the effective teaching and learning of climate science. She is the 2013 American Geophysical Union's Excellence in Geophysical Education Awardee for her work in bringing Earth science data and tools to teachers and students and for her leadership in climate literacy. She served as President and Chairman of the Board of Directors of the Earth Science Information Partners (ESIP). She currently serves on the CLEAN Network Leadership Board, the External Advisory Board of the Byrd Polar Research Center at The Ohio State University, the Board of Advisors of the Museum of Science Boston, and the Board of Directors of the Blue Hill Observatory.

The focus of Dr. Ledley's research at Rice University was to understand the role of sea ice and continental ice sheets in shaping global climate. Using energy balance climate and dynamic ice flow models she examined the impact of sea ice on the exchange of energy between the ocean and the atmosphere, the implications of changes in the sea ice cover for local and global climate, and the mechanisms that produced the growth and decay of ice sheets that define the 100,000 year ice age cycle

Dr. Ledley's early work in Earth system science education included developing museum exhibits that bring near real time images of the Earth to the public, contributing science content to planetarium shows, directing teacher training programs in the Earth sciences, developing Earth system science learning activities for the GLOBE program and serving as lead author of the Earth as a System investigation in the GLOBE Teachers Guide, and developing scientific research programs for the participation of students.

Dr. Ledley is a founding member and chair of the CLEAN Network (formerly Climate Literacy Network (http://www.cleanet.org/cln). This work has led to a number of projects. The first is an NSF National Science Digital Library (NSDL, http://www.nsdl.org) and Climate Change Education grant to develop the "Climate Literacy and Energy Awareness Network (CLEAN) Pathway" (http://cleanet.org), a stewarded collection of inquiry-based educational resources that will help learners understand the Essential Principles of Climate Science (http://cleanet.org/cln/climateliteracy.html). This work has received continuing funding for CLEAN Core services from NOAA. The second is an NSF DRK12 and Climate Change Education grant, "Confronting the Challenges of Climate Literacy" project to develop a set of three EarthLabs modules (http://serc.carleton.edu/earthlabs) on climate change that will serve as a the laboratory component of a high-school capstone course in Earth and space science; and conduct a study, using those modules of the obstacles to student understanding of change over time and how to overcome those them. Others include the NASA Global Climate Change Education Program funded "Earth System Science: A Key to Climate Literacy" project, and the NSF funded project "Facilitating a Deeper Student Understanding of Change in the Earth System on Multiple Time Scales" project.

Dr. Ledley has also been involved in a spectrum of projects that focus on the facilitation of the use of Earth science data in educational contexts and leverage the national digital library efforts. She received NSF NSDL grants to develop the Earth Exploration Toolbook (EET, http://serc.carleton.edu/eet), an online resource that provides step-by-step instructions for the use of an Earth science dataset and data analysis tool by teachers in the classroom; and to run innovative professional development workshops focused on specific datasets and analysis tools in the EET (http://serc.carleton.edu/eet/workshops.html). She also received NSF grants to lead the Digital Library for Earth System Education (DLESE) Data Services and AccessData (http://serc.carleton.edu/usingdata/accessdata) projects that focused on bridging the communication gap scientific and educational communities to make more Earth science datasets accessible and available to teachers and students; and the Tools for Data Analysis in the Middle School Classroom (DataTools, http://serc.carleton.edu/eet/msdatatools) project that facilitates middle school teachers learning and adapting IT tools and Earth science data for use in the classroom.

Dr. Ledley is the President and chair of the Board of Directors of the Earth Science Information Partners (ESIP, http://www.esipfed.org/), and was the founding chair of ESIP's Standing Committee for Education. She is Secretary of the Education Section of the American Association for the Advancement of Science (AAAS), and an adjunct professor at Bentley University where she teaches Global Climate Change. She is also a member of the External Advisory Board for the Byrd Polar Research Center at the Ohio State University and the Board of Overseers of the Museum of Science, Boston.

Dr. Ledley was a member of the National Research Council Roundtable on Climate Change Education. In her role as chair of the CLEAN Network she has coordinated multiple interdisciplinary and transdisciplinary sessions for the AGU and GSA annual meetings. She has also served as the chair of the Committee on Global and Environmental Change of the American Geophysical Union (AGU) and chair of the panel to develop the original AGU position statement on Climate Change and Greenhouse Gases in 1998; and as chair of the panel for GSA to develop a position statement titled Promoting Earth Science Literacy for Public Decision Making in 2012.

Ledley, T.S., L Dahlman, B. Domenico, and M.R. Taber, "Facilitating the Effective Use of Earth Science Data in Education through Digital Libraries: Bridging the Gap between Scientists and Educators" , IEEE Technical Committee on Digital Libraries Bulletin, v 2, no 1, http://www.ieee-tcdl.org/Bulletin/v2n1/ledley/ledley.html, 2005.