On hot days, you may have noticed that it feels a little cooler in grassy areas and near water than it does on concrete sidewalks or near brick buildings. This phenomenon is called the urban heat island effect, and its results can be measured in local climates. 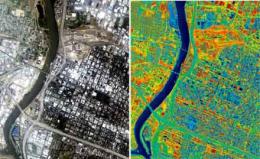 Heat islands can be studied using remote sensing techniques. In this aerial view of Sacramento, the left image shows a photographic view and the right image shows the thermal, or infrared (IR) image. In the photograph, the light colored areas are rooftops and roads, while the dark areas are primarily vegetated areas or water. In the IR image, the cooler areas are shown in shades of blue or green, while the hotter areas are orange or red. There is a temperature difference of approximately 50 degrees Fahrenheit (28 degrees C) between the coolest and warmest areas of the image.

While remote sensing allows us to gather temperature data over a large area, the best way to study temperature variations over a small area is by direct measurement. Such measurements will account for heat reflected from vertical surfaces, like building walls, as well as horizontal surfaces, such as parking lots and rooftops. Thus, ground-level temperature measurements provide a more accurate picture of temperature differences.

In this chapter, you will measure and record local temperatures over a variety of different surfaces, then display and analyze your data in a GIS, or geographic information system.