Case Study: Where in the World? 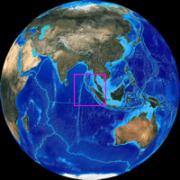 Map centered on epicenter of earthquake responsible for tsunami of December 2004. Larger Version

When a newsworthy event occurs, people want to know where it took place. For instance, when a deadly tsunami occurred in December of 2004, every news story about it included a map of the region that was affected. People wanted to know where the tsunami originated and what places were nearby.

Similarly, when NASA successfully landed two exploratory rovers on the surface of Mars in January of 2004, news stories included maps of the red planet showing the lander locations and the regions they would explore. Global-scale maps such as these provide valuable information to help us understand where events occur and what other regions might be effected, both on Earth as well as on other worlds.

What if an important event happened at your location? Could you produce a map showing where it was and what was around it? Even if a major event didn't occur, could you generate a map of a particular region on Earth or another world? What kind of global-scale map could you use to illustrate your work or clarify some location?

After you complete this activity, you'll be able to use the Jules Verne Voyager mapping tool and data to create a wide range of custom map images. You'll also be able to save your images and insert them into presentations, reports, or other documents. Once you've learned how to access the maps you want, you'll also be able to discover the rich variety of data available for representing Earth and other planets and moons.