Case Study: How Widespread was the Warming at the Paleocene-Eocene Thermal Maximum (PETM)? 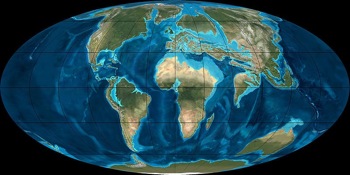 Earth in the Eocene.
It has been said that the past informs the present, so as Earth's present climate changes at a seemingly unprecedented rate, the paleoclimate record becomes an important analog for examining the potential impacts of present global warming on life on Earth.

As humankind continues to add CO2 and other greenhouse gases to the atmosphere, we are contributing to the possibility of tipping the climate to one that is dramatically different from anything our species has ever experienced. Many ask: What changes will this new climate state trigger, and how will the Earth systems respond?

According to the records in the ocean sediment cores, our best example of a relatively abrupt increase in global CO2 concentrations (and subsequent temperature increase) occurred 56 millions years ago, during the Paleocene-Eocene Thermal Maximum (PETM). The relatively rapid—10,000 year—increase in Earth's temperature significantly altered life on Earth, and in the ocean. The new climate state lasted roughly 150,000 years. This time period, known as the Eocene Optimum, lasted from 52 million years ago to 50 million years ago.

Abrupt Changes for Life on Earth 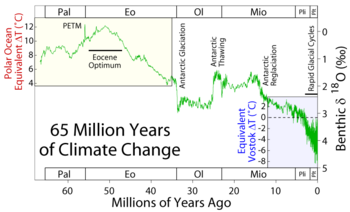 Temperature reconstruction of the past 65 million years.
However, for many of Earth's species, the Eocene Optimum was anything but optimal! During this period of time, both the land and deep ocean temperatures rose between 6 and 9 degrees Celsius. The PETM warming was triggered by a rapid release of greenhouse gases into the atmosphere, most likely from biological sources. The CO2 concentration at this time is estimated to have been as high as 2000 parts per million. Some scientists hypothesize that CH4 (methane) may have come from methane hydrates and been rapidly converted to CO2 in the ocean and atmosphere.


The impacts of the PETM were not limited to changes in Earth's atmosphere and surface temperature. Because Earth's systems are coupled, the ocean acts as a buffer to the atmosphere, absorbing CO2 that is released from natural and anthropogenic (man-made) sources. CO2 increases in the atmosphere cause acidification, or a decrease in the pH, of the ocean. During the PETM the ocean "soured." As this acidification occurred, ocean animals with calcified shells were generally unable to adapt to the rapid change. As a result, 30-50% of the benthic foraminifera became extinct. Not only did living animals disappear in the acidic ocean, calcareous microfossils were also dissolved. Previously hard, carbonate-rich sediments were transformed into clay ooze.

Some Species Flourish in the New Climate

Nano Fossil: Morozovella velascoensis
Not all of the impacts of this event were catastrophic; some animals and plants flourished in the new environment. In the ocean, planktonic foraminifera diversified and dinoflagellates bloomed. Many terrestrial organisms migrated to higher latitudes (moved North or South), while others responded to the warmer, wetter climate by adapting and evolving. In fact, fossil records show that this period produced the first ancestors of the hoofed mammals, relatives of the modern day horse. Fortunately, because this event took place during an ice-free period, sea level rise was minimal. The changing sea levels were limited to the impacts of the sea water's thermal expansion.

However "optimum" the Early Eocene was for life in general, it was beyond the ideal thermal range for humankind. If we compare the PETM to the projected warming for 2100 of 5 to 6 degrees Celsius, we see changes that are comparable to the dramatic temperature change that ended the last Ice Age. Given our current climate conditions, as well as the human population density and distribution, a change of this magnitude would be catastrophic to the human species and would, once again, rearrange the landscape and living species on Earth.

This chapter focuses on the Paleocene-Eocene Thermal Maximum (PETM), which occurred approximately 56 million years ago (MA). In this chapter, you will be examining ocean core records for changes in planktonic foraminifera. These planktonic species continuously fall to the ocean floor, and are preserved as fossils in the accumulating sediment. Naturally, the more fossils preserved in the record, the better the resolution of data. Higher resolution data makes it easier to identify rapid species changes associated with changing ocean temperature.

The Integrated Ocean Drilling Project (IODP) has thousands of marine sediment core data, which can be accessed using Virtual Ocean. Users of this chapter will use graphing tools within Virtual Ocean to create an age-depth plot (ADP). They then will create species diversity curves to search for abrupt changes associated with Paleocene-Eocene Thermal Maximum (PETM).