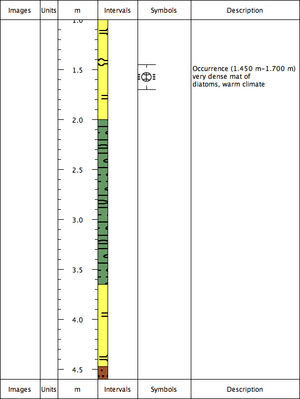 Users will create a graphic model of ocean sediment cores that represent a complete cycle of Earth's climate. After viewing an animation of ice shelf advance and retreat over the Ross Sea in Antarctica, users will create their own model cores based on what they have learned in the activity.

This activity is designed to provide background for educators and students on the role of sediment cores in revealing the climate change history of Earth. It can be used as a professional development activity or with students in grades 6-16.

After completing this chapter, users will know and be able to:

This one-week activity engages users in an investigation of the role that ocean sediment cores play in revealing Earth's climate change story. In Part One, while on a virtual trip through the Southern Ocean, users learn about the four primary types of ocean sediments found around Antarctica. In Part Three, users use an interactive animation and make predictions about the sediment types that they would expect to see in ocean cores reflecting Earth's climate cycles. Throughout the activity, users model what field scientists do as they work through the scientific process: make observations, create a hypothesis, collect data, revise the hypothesis, collect more data, discuss, defend, analyze, and communicate their results.

The multinational ANtarctic geological DRILLing (ANDRILL) team of over 200 scientists, drillers, and technicians spent many months on the Ross Ice Shelf. There, they drilled through several hundred feet of ice and ocean water to reach the ocean floor. Then, core-by-core, they brought up over one thousand meters of sediment in order to decipher the story of climate change through geologic history.

Show me the location of the ANDRILL project

Hide
The ANDRILL drill sites are show with stars and labeled "SMS" and "MIS" in the image below. 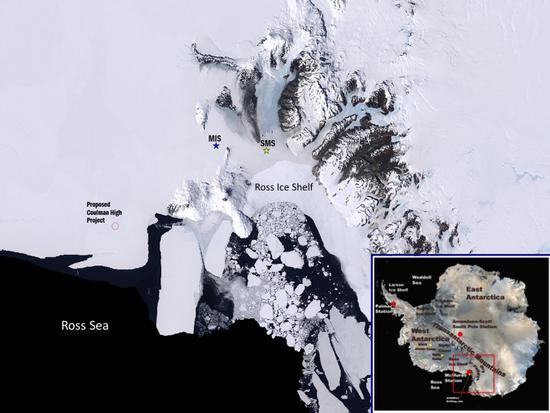 The Earth's climate has changed dramatically over time. Places, such as Antarctica and Arizona, that were once suitable for large reptiles (having lush vegetation and warm temperatures) are now dry deserts. Land areas, such as Canada and the Rocky Mountains, once covered in ice, are now lakes and forests. The time over which these changes occurred is represented in geologic time scales—tens of thousands to millions of years. Throughout its entire history, Earth's climate has oscillated between warm and cold phases. In the most recent 10,000 years our planet has enjoyed a relatively warm, stable climatic period. The current knowledge about climate change is derived from many sources: ice cores, sediment cores, rock cores, tree rings, and the fossil record. In this activity, users explore one of those sources, sediment cores from the ocean floor.

Today, our climate is changing with far-reaching impacts. Scientists around the world are working hard to understand the changes. Politicians, economists, farmers, land developers, and you and I, are among the stakeholders whose decisions will be based on the understanding of climate change. Examples of impacts include: crops that are now grown in specific areas may have to be relocated; locations where people are living today may become uninhabitable in the future; and animal habitats, such as the Arctic sea ice, are changing or disappearing.

The ocean floor receives a continuous supply of small particles that settle in layers called sediment deposits. These particles vary in their size, chemistry, and color. They originate in many places including the remains of living organisms, the atmosphere, and the land. Rocks that will become sediments are carried from the land to the ocean by rivers. In coastal marine systems, waves pound against the shore. Their force breaks down the sand and rocks. Other types of weathering include flooding and the mechanical action of ice formation. Atmospheric particles found in oceanic sediment may come from dust storms, plant spores, molds, or pollen. These particles are carried by the winds over the ocean where they are deposited. When living organisms die, they settle to the bottom of the ocean and become part of the sedimentary deposits. Shells, diatoms, and single-celled creatures leave a record of their presence in the ocean sediment when their bodies are preserved in the sediment layers.

The keys to climate records in ocean sediment cores are stored in these particles. For example, in order for marine plant life to occur, sunlight must be present. Therefore, when the polar ocean is covered with thick ice, the presence of plant life in the sediment is reduced. In times of warm temperatures and rain, there is increased erosion of rock, which triggers the addition of more land-based particles to the mix. As Earth (and its oceans) warms and cools, biological diversity and water density change in response to the warming and cooling. Populations and species may increase in number and diversity, decrease, or become extinct. These records are preserved in ocean sediments. Ash, from volcanic eruptions, settles to the ocean floor in layers. The ash record from known eruptions provides another clue that is important in the dating of the age of the sedimentary layers. If preserved intact, ocean sediment layers provide a record of changes in Earth's climate.

Listed below are some of the key questions users will respond to in this activity:

Instructors may want to download and share the following PowerPoint of supplemental slides to use as background illustrations. The PPT file contains further details about the ANDRILL cores and their relationship to Antarctica's ice sheets and shelves. Slides courtesy of Dr. Ross Powell. ANDRILL Cores Supplemental Slides (PowerPoint PRIVATE FILE 23.4MB Apr24 11)

The links below can be used to access more information about ocean sediment coring, Antarctica, ANDRILL, and climate change. These readings may be used as homework assignments, or serve as in-depth references.

PBS video: Secrets Beneath the Ice—This 52-minute video describes the ANDRILL project and other glacial monitoring projects around the world. Watch online or purchase the DVD.
ANDRILL educational podcasts (link unavailable)
ANDRILL media page (link unavailable)—Includes media guide (PDF) and short 3-minute introductory videos.
ANDRILL Drill Rig —The technology of the drilling process is explained on this page. (link unavailable)
Evidence: Sediment Cores
How Scientists Explore the Oceans
What it is like on an Ocean Coring Voyage
McMurdo Ice Shelf Core Viewer — shows images of the cores next to the diagrams.
CoreRef—CoreRef provides web-based access to core imagery and data for over 1600 marine, antarctic, and continental drill holes.
McMurdo Ice Shelf (MIS)—This is an overview page of the ANDRILL MIS project with useful background information.

Beginning knowledge of ocean sedimentation and the fossil record are important prerequisite skills for users of this chapter. In addition, familiarity with tree rings, and the climate information they contain, will help students with the concept of cores and sequential layers.

The sediment core cards contain the background information and key terms needed for this activity. They are pictured in Part 1, "show me the cards". You can download these cards in PDF or PPT format from the links below.

Set the stage for the activity by describing the ANDRILL research team. Depending on class time and facilities, teachers may want to show one of the short videos from the ANDRILL site, or the NOVA video. In the introductory exercise, the ANDRILL team is headed to the Southern Ocean and the Ross Ice Shelf in Antarctica to recover sediment cores from thousands of meters below the ocean floor. The cores will reveal clues of Earth's climate change history.

This chapter can easily be placed in a unit on Climate Change, Geology, Earth System Science, Oceanography, or Environmental Science. It applies inquiry strategies as well as teamwork, science journal writing, communication skills, and practice in the scientific method.

Listed below are some questions to get students started thinking about climate and climate change.

The activities engage students in climate change research and will support content standards in Earth Science and Environmental Science courses. This unit provides students with an opportunity to explore an actual tool used in climate change research. The PSICAT program helps researchers record, catalog, analyze, and disseminate information about the sediment cores they retrieve from the ocean floor. It can be downloaded for free and includes a tutorial to help users get started.

Grade 12 Understandings about Science and Technology

1. How to use maps and other geographic representations, tools, and technologies to acquire, process, and report information from a spatial perspective.

4. The physical and human characteristics of places.

14. How human actions modify the physical environment.
16. The changes that occur in the meaning, use, distribution, and importance of resources.

The Uses of Geography