What Do the Climate Records of the Past Tell Us About the Future? 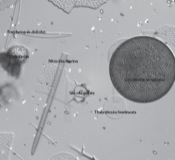 The presence of these diatom species in ocean sediment cores indicates a warm period in the Earth's climate history.

Throughout its history, Earth's climate has oscillated between warm and cold phases. In the most recent 10,000 years, our planet has enjoyed a relatively warm, stable climatic period. This period has permitted a wide variety of life forms to flourish, both on land and in the ocean. Today, however, Earth's climate is changing, more rapidly than in the recent past. Increased carbon dioxide (CO2) in the atmosphere, the result of burning fossil fuels and clearing of forests, is causing a significantly rapid warming trend on Earth, unlike anything experienced in the past millennia. As atmospheric CO2 and temperature increase, the ocean is also responding. Because the two systems are coupled, changes in temperature and chemistry in the atmosphere trigger changes in the ocean. Just as in the past, these present-day changes in the ocean determine which types of oceanic life will flourish and which will decline.

Capturing Climate Change Records from Antarctica and the Southern Ocean

The Ross Ice Shelf, pictured above, in Antarctica is several hundred meters thick and as large as France. Throughout Earth's history it has alternatively increased and decreased in size. The ANDRILL drilling site is located on the Ross Ice Shelf.

Our study of past climate (paleoclimate) takes place in the Southern Ocean region, around the continent of Antarctica. In warm climatic periods, the ice surrounding Antarctica retreats. When this occurs the ocean is exposed to increased sunlight and air. These conditions favor an abundance of marine plant and animal life, including diatoms. Conversely, during cold periods, the ocean also cools; consequently sea ice increases and covers the ocean surface. When sea ice covers the ocean surface, exposure to sunlight and air is reduced in the ocean below. During these times, different, and fewer, species of organisms thrive. When ocean organisms such as diatoms die their un-decomposed silicified (carbon rich) body parts, sink to the ocean floor and become layers in the sediment. Thus, this change in life conditions is recorded in the composition of the sediment cores. 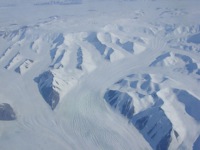 Glacial ice and snow in Antarctica.

Another record that is preserved in the sediment is that of glacial activity. When long periods of cold air temperatures occur, large accumulations of snow and ice build up on land and form glaciers. Over thousands of years this ice accumulates. Eventually, due to the weight of the ice and the force of gravity, snow is transformed into glaciers and begins to flow off the land and float onto the ocean. There, these floating glacial extensions are called ice shelves.

Other clues to climate history are also stored in the cores. For example, if during a cold period, the ice shelf advances far enough for the ice to be grounded on the ocean floor, this event will be recorded in the sediment. Advancing grounded ice shelves may mix the sediment layers and compact the remaining materials with their weight. Retreating grounded ice shelves also leave their mark in thick deposits of small rocks, called clasts, and a smooth surface for new layers to start accumulating. The rocks in the sediment cores from the Southern Ocean around Antarctica tell the story of climate change as the ice shelves advanced and retreated in synchrony with the cycles of the cooling and warming of Earth's atmosphere. Like the pages of a book, each of these sediment layers contains a segment of the record of climate change.


Decoding the Data in the Cores

Today, specially equipped research ships use a coring apparatus to bring samples of these sediment layers to the surface as sediment cores. Once these cores are recovered, scientists are able to analyze them and uncover the story of past climates. Unlike tree rings that contain a relatively short record of climate history, sediment cores—which preserve hundreds of thousands of years of Earth's history—tell a much longer story. Sediment bands (seen as changes in color, texture and composition in the core) indicate climate cycles that each may span hundreds to thousands of years. The record in these cores helps researchers piece together Earth's history of climate change.

As you work through this activity, consider these key questions: